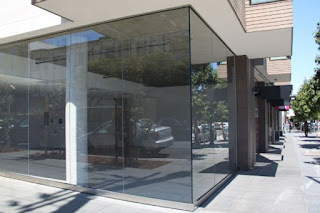 Mayor Bill de Blasio has been largely noncommittal on speaking about how the city can combat some of the blight that’s sweeping New York’s retail corridors, but that may soon change.

On his Friday spot on WNYC, the mayor alluded that retail vacancy has been on the brain (h/t NY Post). “I am very interested in fighting for a vacancy fee or a vacancy tax that would penalize landlords who leave their storefronts vacant for long periods of time in neighborhoods because they are looking for some top-dollar rent but they blight neighborhoods by doing it,” he said. “That is something we could get done through Albany.”

The mayor’s office said the initiative is in the planning phase.
Posted by Queens Crapper at 12:47 AM

That is actually a good idea from Dumblasio.

How about we charge the dope a vacancy tax every time he vacates NYC on some progressive quest?

How many of these vacant storefronts have offers to move in that are declined waiting for a better offer?

It reminds me when Obama said people were getting bad mileage because they were driving around on under-inflated tires. Honestly, how many people were doing that and how much was it affecting gas consumption? Just stupidity lapped up by the masses too stoopid to know any better.

Don't drink the Kool aid. Just because someone says it doesn't make it true. Many are vacant because NYC drove business out with increasing rent, taxes and regulations.

Just coming from DuhBlazio I don't believe it.

It's a good idea but de Faustio didn't think of it. Jeremiah Moss did and Tony Danza brought up the issue on that same show exactly a year ago.

Besides, he said he's going to "study" it. Which is all anyone in that neoliberal cult of officials in City Hall ever do at massive expense to the middle class and working poor taxpayers.

Another thing, de Faustio is the penultimate hipshit. Not only is he a clueless transient that spends money with reckless abandon (except not from his parents but from the taxpayers), but he can't come up with ideas of his own so he co-opts/reappropriates/steals from others. Like Gianaris' idea for a millionaire tax to fund the subway.

WHat about McMansiosn left unbuilt for years because of lack of financing?

I can see this being reasonable where landlords are holding out on new leases so they can sell the lot once every lease is up. But look at metro and myrtle avenue some businesses just can't stay opening. I can't say if no one is interested in the properties or if the rents are just too high but retail is dying.. if sears/ and toys r us can't stay in business what makes you think these storefronts aren't vacant because the demand for these little shops aren't there any longer. Amazon / Walmart.com Fresh direct all play apart. We are in the internet age. Unless you need something right now you're going online to say time and money. And again who are you to tell a landlord what he can charge for rent... even if you think it's unfair. It's their money to lose or gain. People are so willing to give up their rights if it looks like someone they don't like will be getting screwed over.

If this passes the same precedent will follow for small homeowners the have unused basement's or whatever else this socialist can consider underutilized space.
The same shit they have in Denmark and other Scandinavian country's. Scandanavian Socialism where the government counts your rooms, bathrooms, property and other things VS your household size.
---bring the single mom of 4+ or huge tax to right to your doorstep.

I guess the census people will come knocking again soon, this time hard and relentless.

Great idea. Walk down Broadway or even 5th avenue sometime, see all the vacant storefronts in really good neighborhoods where some landlord is waiting for a Starbucks or a CVS or a bank to come in and rent astronomical prices. It's better to nip this in the bud before high-rent blight spreads to Queens.

In other good news, I read that BDB may drop the terrible streetcar nonsense. yay.

One of the more decent ideas to come out of this awful administration, even though ,it is something that has been stated long before him, he just stole the idea, but if he can implement and quickly (no more long term studies), then good.

West Village business areas looks like all the steel mill / coal mine towns when those industries closed, long vacant graffiti, garbage strewn store fronts, but ever take a walk on Lexington Ave between the 60's and 70's. I don't know what it is like now, but a few years ago walking in that stretch I counted at least 10 vacant store fronts. BUT really walk anywhere in this city and you see this.

BUT as usual, this is nothing new, so why wait for years and years to actually address this, did they think this would just disappear. BUT NYC is at fault on this too, it is not a business friendly city.

But don't stop there, do the same damn thing on abandoned construction of houses and buildings which is another sore sight everywhere. Go anywhere in SE Queens and see the remnants of half down construction that has been sitting in some cases for a decade.

What really needed is actual strong, smart, forward thinking leadership in both the Governor and Mayor position, but city council as well. I mean the whole fucking lot is rotten to the core. AND get rid of the Public Advocate office and all the borough presidents and their staff, total DO NOTHING positions and total waste of tax payers money. What is needed is an independent council separate from government to over see all this shit and a complete deconstruction of all city agencies like DOB, MTA, DOS, the whole lot of it. The way is has been going is NOT WORKING. Government has gotten way too fucking big, which would be fine if shit got done and shit worked, but that is not the case.

It really cannot be the hard to fix. You look at a problem, decipher what the problem is, put stable good solutions into place and fix it. AND part of that fix is getting rid of dead weight and changing the whole process of people who want to run for office (no fucking need for fucking signatures, put your name in the hat and you are on the ballot). Ever take a look at what has to be done to run just for the bottom positions, it is difficult to juts figure out what the fuck you need. SIMPLIFY, that for the most part work.

A tax is never a good idea.

And a two bedroom railroad flat in Ridgewood is renting for $2,000+ a month.

Who holds the record for the longest posts...Joe or Tom?
YAWN! 100 words or less, please.

A rare good idea from the DeBlasio administration.
At very least, they need to counter the (I believe federal) tax breaks and deductions that make it profitable for landlords to drive mom & pops out and leave storefronts empty for years while waiting for a boutique chain to drive rents up to inaffordablity.

Please stop reinforcing the stereotype that our generation has no attention span.

I am so sorry I infringe on your tweet mentality of 140 characters or you ability to concentrate for more than a nano second. Lordy Lord you should have to read more than 2 sentences. That is what Twitter is for, morons like you who don't have time to read. Better yet stick to big colorful pictures that sparkle.

“I am so sorry I infringe on your tweet mentality of 140 characters or you ability to concentrate for more than a nano second. Lordy Lord you should have to read more than 2 sentences. That is what Twitter is for, morons like you who don't have time to read. Better yet stick to big colorful pictures that sparkle.

Much better. Thank you