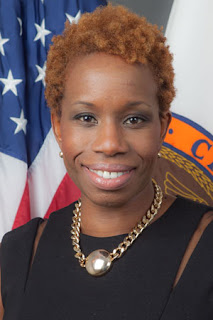 Beleaguered NYCHA chairwoman Shola Olatoye, accused of making misleading statements about the conditions in public housing and under fire from multiple critics, will announce Tuesday that she is resigning.

Olatoye will make the announcement at a public housing development in the Rockaways along with Mayor de Blasio, who appointed her four years ago and has defended her against a growing chorus of criticism.

Late Monday, the mayor said he will tour the Ocean Bay Bayside Houses Tuesday morning, and a City Hall spokeswoman confirmed Olatoye would step down and the mayor will install government veteran Stanley Brezenoff as interim chair of the New York City Housing Authority.

Late Monday the mayor continued his defense of Olatoye, 43, calling her “a change agent from Day One. Crime is down. Repairs are faster. Finances are stabilized. And NYCHA is putting record investment from the City to work making life better for the 400,000 New Yorkers that call NYCHA home.”
Posted by Queens Crapper at 6:38 AM

Step down? That leaves her eligible to be reappointed to some new taxpayer funded job and keep all of her benefits.

What happened to firing these useless parasites?

All of her fancy clothes, makeup, hairdos, and jewelry couldn't hide the fact that she was a phony through and through. A puppet of the mayor. Shame on her for turning her back on her own people!

she was "fired" bottom line -

Good riddance to a waste of life. It looks like her position became moot when Mario's son and HUD stepped in to implement financing and more thorough investigating (finnallly) thus making the nextgen program unnecessary, which was the obvious reason why they did not do any boiler or any other infrastructure repairs, lead and mold abatements, etc. etc because they were withholding that money for the developers involved with it.

But de Faustio is still being a douche about it, acting like her blatant brazen lying and the inhumane treatment of the 400,000 residents freezing to death for months never occurred. But it's OK because his corrupt incompetent self and his staff are collapsing.

I'm sure Shoya will find work in the private sector with no problem, most assuredly to lobby for a goddamn developer or p.r. firm representing them, which is the style she used running NYCHA in the first place.

WHEN YOU LIE TO THE FEDS YOU DESERVE TO BE PUNISHED. HER RESIGNATION COULD NOT COME FAST ENOUGH.

Will keep all her benefits and will be quietly placed in another city agency and collect a huge salary at taxpayer's expense. She's one of DeBlasio's friends and probably a close friend of his wife. If you're connected, the laws don't apply to you. Shola will continue with her lazy work ethic and Bill will defend her, no matter what she does or doesn't do.

Won't be missed. NYCHA projects were never meant to remain in their current form, unchanged and unimproved from inception. But like so many things the City is content to let it stagnate.

Being the Head of the NYCHA is like booking a State Room on the Titanic. You can move the deck chairs around all you want..

When is shithead de BLASS-hole going to testify in the Harendra Singh trial? Everyone was nabbed BUT the one who accepted massive bribes for years. Now, I'm not surprised at the city's protection of a worthless shill like Shola. After all, Affirmative Action has been destroying jobs for qualified white applicants for decades, in the name of diversity that betrays qualification and meritocracy.

Ever wonder why you can't get through to anyone in city government? They are all people of color, mentally lazy and rewarded fro their intense incompetence, which has reached a scale of such government tyranny, that the whole system devalues honesty itself. For further proof, one need look no further than the Transit Authority, and how that agency is now a hot house of colored people's time and their job protection for life!

But, if a white person behaved with this kind of open incompetence, there would be hell to pay. Frankly, the system is so broken, that it will never be accountable, much less responsive, ever again!

I have always believed that she was DeBlASSio's sidepiece. Hence his refusal to fire this obviously incompetent idiot.

The Baz covered her lack of competency as NYCHA Commissioner for far too long - it is quite evident she was way out of her league with this position. She and Mayor Prozac had to travel all the way to Far Rockaway for optics to find a relatively decent NYCHA housing project to formerly announce her ‘resignation’. Besides, he now has another small problem with his Deputy Director in the Office of Criminal Justice getting busted for a loaded gun with the serial number defaced (Fed rap) inside a vehicle ‘reeking of marijuana smoke’ to address. This incident not to be confused with the de Blasio staffer who was arrested last year for child porn. Needless to say, none of these items will be addressed on his WNYC weekly fireside chat.

AND where are all my far left liberal brothers and sisters when it comes to all this shady and crooked shit with all these liberal leaders. AND this is the problem with both far left and right sides, they don't call their own kind out on shit, but waste no time attacking the other side.

Case in point, I have said this many times over, deBlasio is pretty much Trump without the racist rant, but otherwise he is the same type of figure, a cheat, a lair, a whiny little bitch, hates criticism about him, etc The Daily News the other day on it's front cover has finally said the same thing. ABOUT TIME.

You must call your own people out on their shit and very few do that.

Her testimony was full of proven lies. She should have been fired immediately after that.

And da mayor thought he was covering his ass by having a minority incompetent jive turkey running NYCHA.
Screwing her own. Typical'

My prediction: she will have a soft landing into a job at CUNY.

"But if a white person behaved with this kind of open incompetence...."

Can we stop with the racial nonsense for once? The mayor is a white male, as is the President of these United States. Both are incompetent at best and openly corrupt at worst. They are but two examples. Want more incompetence? Let's take a look at the incompetence/corruption of the City construction unions, largely comprised of white males. Thanks to them, the City has among the highest construction costs in the world and we still can't build things properly.

The point is that incompetence/corruption is not limited to a particular color or gender. Focus on the real problem: America is on it's last legs and anyone who can do it is raping the system at the expense of the people.

SHE LIED TO AITHORITIES UNDER OATH. But DeBozo will plop her somewhere else. Just watch. She is not going away.She belongs in jail with her boss!

"My prediction: she will have a soft landing into a job at CUNY."
Yes that's what I was thinking too.


No, we elect unhinged white people to be president.
Stop with the ignorant racist comments.

>>But, if a white person behaved with this kind of open incompetence, there would be hell to pay.

No racism. Just the truth here.