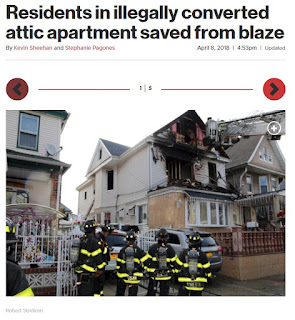 Three Queens residents’ lives were saved in an “amazing rescue” by firefighters who pulled them to safety through the window of an illegal attic apartment during a blaze Sunday, fire officials said.

“They would all have been dead,” FDNY Batallion Chief Robert Bohack Jr., said.

Firefighters were called to the scene at 101-51 107th St. in Richmond Hill around 7:45 a.m. for a fire that started on the second floor of what was legally considered a two-story building.

But first responders quickly realized residents were being illegally housed in the attic and would need to be rescued, an FDNY spokesman said.

Smoke eaters battled the flames from inside, by traveling up the interior stairs, and from the rear of the home, where firefighters used a ladder to access the attic through a small window.

Buildings department inspectors determined the two-family home had been illegally converted into a five-family structure, with additional apartments in the cellar of the building, a DOB spokesman said. Officials immediately issued a vacate order due to the heavy damage throughout the building.

When confronted at the scene, a man identified as the building’s owner would not answer questions about the illegal conversion.

Perhaps he's mum because there's been a vacate order on the house for 10 years!
Posted by Queens Crapper at 6:49 AM

There are thousands of these just in that section of Queens. Note to DOB inspectors: Follow immigrant construction workers purchasing house construction material at Home Depot in Ozone Park, Jamaica, and Forest Hills, and Flushing. You'll hit the jackpot of
Illegal conversions ...if your really care and do your job.


That describes almost 100% of the construction workers.

THIS IS WHAT IS MAKING THE BOROUGH OF QUEENS SO SHITTY!! THIS IS HAPPENING IN EVERY NEIGHBORHOOD FROM CORONA TO FLUSHING AND YES EVEN BAYSIDE. AS MUCH AS THE NYCHA ISSUE IS FINALLY GETTING THE ATTENTION IT DESERVES, I THINK THIS IS THE NEXT URGENT ISSUE THAT THE MEDIA NEEDS TO HIGHLIGHT.

Better yet, look at how derelict the DOB is by looking at the Complaints for this address

A complete disregard for rules, regulations, and human life!

When will the DOB wake up and do their job. These illegal homes are all over Queens. I guess not enough lives have been lost.

Ten years! Talk about lack of enforcement. Yet sani is all over you whenever an iota of litter gets blown onto your walks...

3 people in an attic is two too many. Used to be nobody cared if your older son wanted "his own place" down in a (converted) basement or upstairs in the attic: both of my cousins' families in well-to-do areas of Hollis and Green Acres let their teenaged sons do that as they were growing up; but it was never meant to be a permanent situation.

Now there's a "vibrant" story for you..

Chief to his Firefighters, " Get those Democratic Voters out of the Attic !!!"

DOB will ever do anything about this because it would instantly add thousands of people to the number of homeless in this city. No mayor wants to be responsible for adding thousands to the homeless number, so they will all turn a blind eye and the fires will continue, people will say it's sad, and the process will repeat itself.

Out of curiosity, why didn't the neighbors complain about this blatant violation of the law?

Oh, I see. They are illegals and illegals don't squeal on each other, they just let them die instead.

Look at almost any DOB record and you'll find they do absolutely nothing about anything. No followup, no action. Hell, they don't even collect their penalty fees half the time it seems. What's the point?

If deBlas has his way he will legalize these firetraps, to collect the increased taxes.

Jeez, we should take a lesson from the Israelis and confiscate the home and then tear it down and sell the lot The owner is breaking the law and putting lives in danger, they should not have the right to own a home. And since the holder of the mortgage is a "partner" with the home owner they should be punished. Make the mortgager check to see if the edifice is being used in a legal manner and if it is not they should call in the loan.


Don't be so stupid. There were complaints made to the DOB.

A warrant is needed to gain access to a home because we have civil rights in this country.
That takes time and money and no one wants to pay for it.
Of course the tenants could let an inspector in but then they would lose a place to live.

>> Anonymous Anonymous said...
>> Out of curiosity, why didn't the neighbors complain about this blatant violation of the law?
>> Oh, I see. They are illegals and illegals don't squeal on each other, they just let them die instead.

What happens when city agencies DO NOT DO THEIR FUCKING JOBS. This should have been nipped in the bud years ago. AND what happens when you constantly populate an area in an expensive city. AND what happens when you do have a proper system in place for dealing with illegal immigration, where illegal immigrants are the majority in these illegal conversions. So where is the elitist liberals when it comes to the safety of illegal immigrants (goes to show they don't really care, where many can lose their lives in these fire traps). Not too mention the lives of people who live near these fire traps. Homes are so close to each other, when one catches fire, it can easily spread.

AND this is what happens in lawless NYC and especially in the wild wild west of SE Queens.

>a fire that started on the second floor of what was legally considered a two-story building.

If it started there, it was probably someone smoking in bed.
If you're living in an attic, make sure to have a rope ladder with hooks so you can get out in an emergency.

To Anonymous who wrote that enforcement would drive people into the streets -- you hit the nail on the head. I have been told this by Tish James ... the "Public advocate"!!

"Enforcement would drive people into the streets"
I think without the illegal apartments the asking prices would go down in these illegal homes making them more affordabile.
The market would correct and people would live elsewhere if they couldn't afford the price.
Let the market decide where people can live without government handouts and illegal practices.
The free market would liberate people from being dependent on these modern day slumlords !

You can't expect a guy to vacate in a rush---he needs time to get his things together.

This is a real wake up call to all those fake civics in Queens that are merely sounding boards for politician's ideas and pulpits for city agencies - but do nothing of substance to combat real problems like this that are killing communities.

We ask Queens Civic Congress to demand from the Queens delegation an explanation as to why this problem has been around for decades, does not seem to go away, and the political elite seem to have not the slightest concern as they waste people's time with transgender bathrooms, wearing pussy hats, and the 'plight' of the illegal aliens.

There must be a clause in Homeowners insurance that it will not pay any claims if there are illegal apartments in the building Let's home so, and the homeowner has to file Bankruptcy.

Let's legalize these and have more housing. Says Dumblasio.