BP race gets another candidate 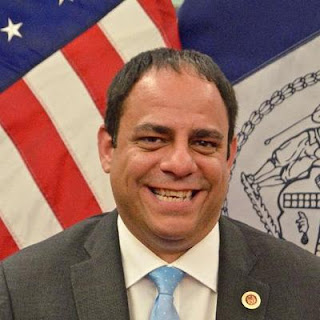 Councilmember Costa Constantinides plans to run for higher office in 2021 and all indications are that it will be for Queens Borough President.

Constantinides held a fundraiser in Astoria last week and the highest donation sought was $3,850. That figure is the maximum allowed for the borough president race and well short of the $4,950 permitted for a citywide office such as mayor or public advocate.

The invitation to the fundraiser reads: “Costa Constantinides A Champion for Queens,” and adds, “I hope I can count on you as we expand upon our legacy and fight for higher office after my current term ends.”

Constantinides is in his final term as a council member and will be forced to vacate his office at the end of 2021. He represents the 22nd District that covers Astoria and parts of Woodside, East Elmhurst and Jackson Heights.
Posted by Queens Crapper at 12:09 AM

Borough President is a "higher office"? This position should not even exist. Katz, Diaz of the Bronx, and Adams in Brooklyn have turned the job into a glorified and political version of a maitre'd.

And he looks ridiculous in that picture.

Maybe he can do for Queens what he did for Steinway mansion.

The steinway-like strip down of this borough is already happening

That's why I have stopped voting altogether, because voting doesn't work. Here is why:

❝The political system, as many Bernie Sanders supporters are about to discover, is immune to reform. The only effective resistance will be achieved through acts of sustained, mass civil disobedience. The Democrats, like the Republicans, have no intention of halting the assault on our civil liberties, the expansion of imperial wars, the coddling of Wall Street, the destruction of the ecosystem by the fossil fuel industry and the impoverishment of workers. As long as the Democrats and the Republicans remain in power, we are doomed.❞ —Chris Hedges

The Wolfman of Astoria

Get rid of the Boro President position . It's a waste of $millions . Their staff are lazy and useless too.

Isn't it about time they do away with this office? What purpose does it serve that isn't already done or even duplicated by multiple other agencies?

Stop spending money we don't have. Get rid of this office and their staff's. Think of the budget savings!

"Virginny Joe" Crowley will never give this guy the nod.
Ya gotta be a woman, a racial minority or a gay person to run for this position.

boy oh boy Mr. JVB is surely pissed about this because he is running for this position also -- now he is campaigning in Ozone Park and Richmond Hill - lol

Borough president is not a wasteful position. My main boy with the beard Jimmy Oddo got so much done for his constituents as borough president on staten island. We just have bad pols.

But there are more to lay the blame than Costa, and we can start with that other jerk, the self-styled 'cultural maven' Van Bramer. Those two Queens guys are responsible for the cultural scene's answer to DaBlaz, Finkelpearl who are busy destroying the one thing that NYC had got right in the past, culture and tourism.

How stupid can you be to throw away one of the greatest brands in the world, Steinway, for a bunch of sh!t warehouses, and starve institutions, both neighborhood and world renowned, for the kind of clap that is watched down at the local Chinese restaurant when business is slow, or your gardener or nanny in the evening when the flowers and kids are asleep in their beds.

The discriminating tourist has London or Paris for buildings and first rate shows that NYC was once known for. Other cities are now known for the innovative cultural scene that NYC once had. A good block of the 'tourism' NYC now has are illegals jumping their 'tourism visa' and the clueless middle-brow package tour crowd that still thinks NYC is what it was a generation ago and watches Lion King then goes to Olive Garden.

So no one in politics in the rest of the city wants anything to do with Queens politicians. As far as the real power brokers are thinking, when it comes to assuming real power, as the mayor office or speaker on City Council, it will go to AOBQ - anyone but Queens.

So let Jimmy and Costa and their ilk rot in Queens Boro Hall, or consolation as a judge on night court, supported by a clueless ground down electorate in Queens that neither knows better or cares.

It will be interesting to see how he does with fundraising. He has already made some noise by endorsing Jessica Ramos against IDC member Jose Peralta for State Senate in Jackson Heights district. I think Queens Boss Joe Crowley supports Peralta.

Costa is an ambitious guy. He may not be handsome, but he's my council member and he works hard. I wouldn't be surprised if he wins.

You'd think with all his dough he'd get his teeth fixed. Those are one hell ugly-looking choppers.

Hey Costa supporter - don't get out of Vallonia much? You should try it - expand your horizons a bit. Life is more than what you can pull out of the dirt under your feet, be it olive trees or grandma's Victorian gem.

Spend a few hours talking to people his office blows off. Spend a few more hours in his office and see the only people they spend time with are Mediterranean immigrants. They are so 1980s.

Under a few decades of Vallonian rule Astoria has gone from one of the tightest communities in NYC, a real hidden gem, to a backwater the world has passed by: sour faced Greeks, shifty eyed developer punks building on the cheap with chrome and foam and happy colors, money laundering Millennial gin mills, catering halls with the decor of 1970s Ozone Park.

Face it. Vallonian values have a poor shelf life south of the Grand Central. That boy Costa ain't going nowhere but being parked for life as a judge or commissioner.

Kust stock the restroom with razors

The Gazette y did not put it on their website. Tsk Tsk Tsk.

A real f*k you to the community. Stupid stunts like that kill your career.

Yes I saw it to. The only people that support him are the clueless hipsters taking part of the rigged Participatory Budget bs, the clueless greens doing the city's work cleaning up Astoria Park, and sorry-assed hangers on in his political club looking for what little crumbs he has in favors and jobs.

No one in Council and in the Machine particularly think he has much under the hood and they are right. He took a lot of hits for being part of DeBlaz regime, the train mess, Dulcken/Steinway fiasco, and for being an all around oaf that doesn't pay attention to non-Greeks.

Astoria has moved beyond him and his type.

Shady and not too bright

Definite werewolf. Has sold out Astoria...