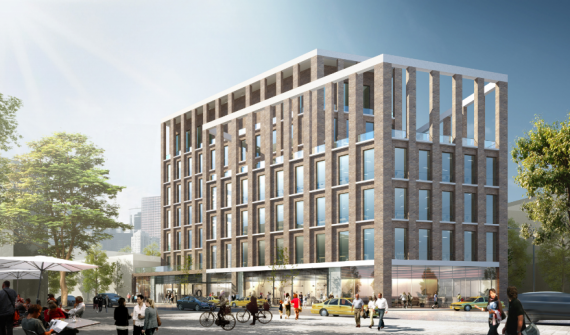 ...the idea that triggering MIH makes this rezoning some sort of salve to the affordability crisis is a cruel joke. The most common criticism of MIH is that the “affordable” units are unaffordable to neighborhood residents. That’s certainly true. In my own writing, I’ve mostly focused on the impact that adding additional market rate development capacity will have on neighborhoods targeted for gentrification. But this rezoning points to another absurdity in the law.

The developer is proposing to use what’s called “option 2” of MIH, which requires the owner to set aside 30 percent of their units (in this case 27 apartments, all studios and 1-2 bedrooms) at an average of 80 percent of the Area Median Income (AMI). The word “average” is crucial here, because it implies that the developer will provide a range of options, which might look as follows. 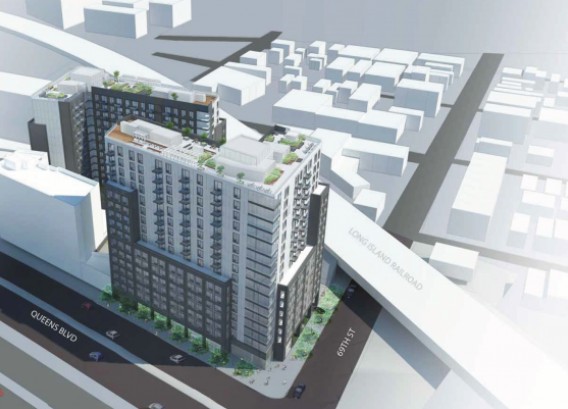 A two-tower complex with over 500 residential units could be making its way to Queens Boulevard in Woodside.

The large-scale development, put forth by Madison Realty Capital, would see a 17 and a 14 story building at 69-02 Queens Boulevard housing 561 units combined, according to filings with the Department of City Planning.

Over 425,000 square feet would be allowed to the residential portion of the complex, which includes 392 market rate apartments and 169 affordable units. The site would also see 5,640 square feet of commercial space.

The development would also include parking for 242 cars, and an open space between the two towers at ground level featuring picnic tables, table tennis, a putting green, and a sand lounge for residents.

A sand lounge? What the hell is that?

Remember, Mandatory Inclusionary Housing was supposed to offer more "affordable housing" but that only comes with out of character structures and a shit-ton of ridiculously priced units that hasten gentrification.
Posted by Queens Crapper at 12:30 AM

A sand lounge. So the building is going to have a beach inside of it. It looks like the hipshits don't want to take the Q53 all the way to Rockaway.

Someone the other day refuted my opinion when I wrote that these developers are mentally ill by saying it's insulting to real mentally ill people because these predatory developers are evil motherfuckers. These particular developers planning and giving the community an ultimatum of what they want to do to the area certainly confirms what EMF's they are and also how sick their minds are.

Isn't it interesting that they leveraged a hotel idea to scare people, which shows they are cognizant of the fact that everyone knows what new hotels in Queens will be utilized for and how these scumbags are looking to profit no matter what and they have carte blanche and the stupid laws and a compromised corrupt mayor enabling them to do it.

None of this affordable housing crap is actually fair to people. There is affordable housing that half the people in nyc can't even get into because they don't make enough money. I was even told that I am ineligible for the flushing commons housing because I was makin 65000/year and I have one child, so I made too much money to live there. Meanwhile, I was eligible for affordable housing in the rockaways which was three blocks away from the projects. Why would anyone want to move their children especially those that are teenagers only 3 blocks away from project housing? The one in a decent section in long island city that was opening up at the time, I didn't qualify for because I made too little money. I don't understand why this crap works the way it does. Not to sound so entitled, but I think those of us who were born and raised here should get preference over housing before anyone else. And it should be made alot more fair than what it is. It was even proven that some of these affordable houses are half empty because not enough people make that much money as they were asking for. If you make 120k/year in nyc, you can afford to live anywhere you want to in nyc without having to go through an affordable housing system. Mayor dumbdumb wants to house every homeless person, when half of them aren't even from this state but he doesn't want to help the younger generation who are stuck living with parents or help the elderly who can't afford rent anymore because they have to struggle to pay for increasing drug costs and copays and there are many elders who are very capable of living on their own and don't need or want to go into an assisted living home or a retirement community. Mayor dumbdumb puts everyone else first,the rich,the illegals, prisoners and out of staters and foreigners before he puts the model citizens who lived and worked in ny especially in nyc their whole lives. I'll be happy to see the day where this city is really struggling to make ends meet because the rich don't pay much taxes,they all have loopholes we know, the poor don't pay taxes, the illegals mostly work off the books so they don't pay taxes on their pay,foreigners will just take whatever medicaid assistance they can get and suck it dry by having multiple children and send their money back to their home countries until they want to retire and they move back to their own country while still collecting usd pensions and social security and medicare from here and they won't be in this country anymore to contribute anything else. So that leaves the suckers who are citizens and have to pay skyrocketing copay and drug costs after we got ripped out of buying a house or nice condo or coop here because it was out of reach for us. Many are already fleeing out of nyc and I hope they all do,I'm glad I did 2 years ago.

Wow, imagine being lucky enough to live right next to and above the Long Island Railroad.
Shake, rattle and roll all day long.

The first article is a long-read, but well worth the time. It closes on a somewhat hopeful note.

"Queens Neighborhoods United has already proven they are capable of such a campaign through their long struggle against a BID expansion along Roosevelt Avenue—a fight many thought they could not win—and they are committed to organizing around this new threat too. Communities across the city should look to this corner of Elmhurst as an example of how local organizing can push beyond the double-bind of predatory development and exclusionary upzoning."

I thank da Crapsta for thoughtfully posting this, which I e-mailed him about two weeks back.

Oh snap! That building if going up next to the former nickle and dimes strip club. Someone should landmark the vehicle on the roof. Buggy or model T?

Anyways, another project requiring a 2 fair zone ,nice just what we need. Look across the Blvd., Another big building is going up, and 2 more near by. I have a strong feeling this will be filled with Asian tenants/ condo owners.

At the COMET meeting Monday it was explained that the area is zoned for a maximum of 10 stories but because of they are making some apartments "affordable" they want one building 15 and the other 17 stories with a total of 561 apartments and retail..They will have retail on ground floor and parking for 250 cars.
What's the use of having zoning laws if they'll change it every time a developer dangles the "affordable" offer and the offer to plant a few trees and benches and call it a public park.Years later many of those public access parks will be gone as well as those affordable apartments.

These spots are seen as the bowels of Queens. The precious northeast won't see this kind of abuse.

Not to sound so entitled, but I think those of us who were born and raised here should get preference over housing before anyone else

Would you like a slipper warmer for your doorstep, too?

Queens Blvd will become a dreary place that will have Chinese and other immigrant tenants from Woodside to Woodhaven. It will look like any 3rd World boulevard with run down ill maintained buildings, junk on the balconies, full of transient illegals.

Queens, where no one cares.