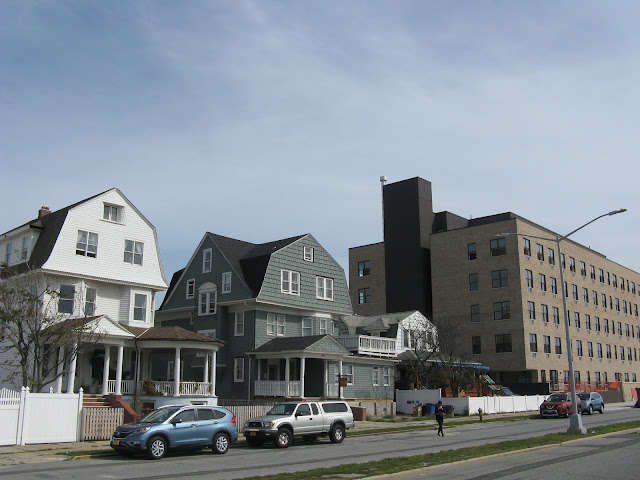 Published reports say that the new building at 9306 Shorefront Parkway will be housing homeless in 30 percent of its units under a new city ruling. Applications for the new 63-unit affordable apartments will close on December 27.

A new report from Crain’s New York Business puts a question mark on the new residential building opening in the near future at 9306 Shore Front Parkway in Rockaway Beach.

According to the highly-respected business newspaper, which is known for its excellent contacts with both business and city government, Mayor Bill de Blasio is apparently attempting to put homeless at the head of the line for affordable housing units such as those planned for the new Rockaway Beach building.

Hey, remember when this was posted which included a remark about it becoming a shelter? Well, BdB fooled us as it will only be part-shelter. What a way to revitalize Rockaway!

They are framing this as "these are for the homeless who can afford an apartment" which makes us wonder why, if they have a job and can pay a modest rent, they don't just move somewhere more affordable.
Posted by Queens Crapper at 7:11 AM

There are some homeless people who work and can afford a modest rent so they should be mixed in with low income people. Get them out of the shelter and let them contribute to the community. It should be an equal share of homeless families and low income.
Many homeless families lost their home and are looking for this. They are not your average street people who when asked about going to shelter they tell you they rather live on the street.

And what happens when they default on the rent? The city will tell the owner they just have to house them at no cost.

Why are we placing the homeless in desolate areas away from public transportation?

No wonder those brooklyn hipshits and their poser chef from playland inn took that deal from the city. (they are still lurking on the beach though, trying to gentrify averne and federal parkland at riis.)

As a working poor person who did not vote for Big Slow De Fuastio, this, as the other alleged affordable housing projects, is ideal for me, since I wanted to move there for years. Although I am still a bit apprehensive because of the risks living near the shore under the extreme effects of climate change, and the way Blaz and Banks doesn't distinguish between the working poor, the recidivist criminal and the mentally ill and warehouses and compartmentalizes them together.

But yet again, despite this marginal improvement to the forced existential miserable stasis weighed upon the majority of citizens because of the fabrications/speculations of the rental market driven by REBNY, the agents of the city and a complicit news media, abject and unjust poverty is being moved further east and south out of the way and sights of the frivolous spending hipshits and tourists. This conjures in me dystopian fears that our city and state are going to build an island off shore or maybe use Rikers if they shut it down to put them (or me) in. A virtual poverty prison. Shit if they are going to build towers practically on the water in the South Bronx and Red Hook, this might be a possibility.

Respect due to the Crappers for posting this story. Great prophecy by that initial comment too. Although that ugly ass building was such a giveaway.

"Why are we placing the homeless in desolate areas away from public transportation?"

the A rockaway park line and the S train shuttle is 4 blocks east. It's not desolate but it's long distance. Modus Operandi for the placement of poverty.

> Mayor Bill de Blasio is apparently attempting to put homeless at the head of the line for affordable housing units such as those planned for the new Rockaway Beach building.

Lovely, this will pit the working poor against the even poorer.

Same thing is going to happen for those "veteran's" housing in Astoria. Nice BS by Costa & Company.

SomQueens gets screwed again.
What else is new?

Putting the haves and have nots in the same building is a recipe for disaster .