Nationwide homeless population is down - but way up in NYC 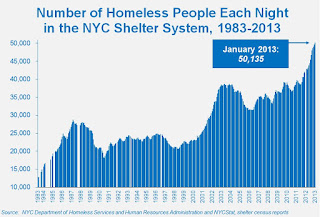 Despite a record rate of homeless in New York City, homelessness across the country has continued to decline over the past seven years, the U.S. Department of Housing and Urban Development announced Thursday.

There were 549,928 homeless people on a single night in January 2016, a 14% drop since 2010, the year the Obama administration started Opening Doors, a broad plan to combat homelessness.

The data is based on figures reported by approximately 3,000 cities and counties across the country.

But the success has not spread to New York City, where there are an estimated 73,523 homeless people, according to HUD.

Also Thursday, a new poll showed nearly all New Yorkers think homelessness is a serious problem in the city, and respondents gave Mayor de Blasio lower grades on handling it than any other issue.

In the Quinnipiac University poll, 96% of voters said homelessness was a serious problem — 70% saying it’s “very serious,” and 26% “somewhat serious.”
Posted by Queens Crapper at 1:33 AM

Of course it's down in other states because they are flocking here and the other cities where right to shelter laws exist.

This may sound like naivete, but the right to shelter should be a divine right, like life, liberty and the pursuit of happiness, and it should be every state in this countries responsibility to address and provide for poor people being priced out, suffering from addictions or just being released from prison returning to society.

We know why...as a right to shelter state...they are here. Using hotels to warehouse the homeless and renting out ones as the hotel continues to run.
It is time to vote this progressive dope out and take all his snowflakes with him.
I did not and will not vote for him.
We need to drain the swamp...Bill DeBlasio must go.
He has no solution for the homeless and when he is voted out the majority of hotels will be warehousing the homeless.
To him it was no big deal parts of Maspeth were not clean out during the snowstorm.
His stance on sanctuary cities...and wanting to get rid of documents with these people's name on it. A Hillary Clinton move with those emails.
His big push to get rid of the horses by Central Park...really that was so important? People working and this brings many tourists to see the park. I rode in one of those carriages. Simply lovely.
Your vision zero which has created what traffic nightmare congestion in our streets and as a pedestrian I Do Not Feel safer. Cyclist just eat the light and oh the pedestrian is at fault or the car is at fault. Real tired of that!
Will be voting for the right person to clean up your mess.

It's because they all came here. We are the state who gives out welfare easier and we take care of them better than we take care of the working class here. Every single person in nyc is on medicaid....trust me I work in a hospital so this is the only type of insurance it seems like I see all day long besides medicare.

The full article is very interesting. First, the city always focuses on the homeless population of 60,000, but the article mentions that this is the population in shelters. According to HUD estimates, the real population (including people who don't go in shelters) is something like 73,000!

They also note that homelessness is up in Seattle and LA, but attributes that to the high cost of living in these cities. No mention of right to shelter in NYC or the fact that they are all sanctuary cities!

One reason is that there are some cities that pay for a one way bus ticket to NYC for their homeless.
They export their problems to the big apple. We get the brunt of it all.
A lot of homeless are mentally ill and can blow up in a flash.

The article does not say homelessness went way up in NYC. In fact, the article states there was a decreased in the homeless population.

Did I miss something?

"Despite a housing crunch in New York City, homelessness decreased there 2.4 percent"

Homelessness increased in Dallas, Seattle, Los Angeles County, and Washington, D.C. "There's no doubt that the lack of affordable housing is the big driver in our homeless numbers,
"

The decrease mentioned has been over the past 12 months, but overall since 2007 it is way, way up. What do you not understand about this?

Ok, so homelessness is noq going down. That's a bad thing?

There's a record high in shelters and you think this is a good thing?

Then we need more high density apartment building to bring the vacancy rate to 8 percent. But no one wants that! More apartments, more density. That's the best way to get people into housing because it lowers overall rents.

""Then we need more high density""

Nonsense, just stop handing out all the free stuff and bogus illegal municipal ID cards and these free loaders will stop parachuting in.

Where is all that $$ Obama's been handing this mayor to blockbust & destroy neighborhoods going ? I been to Philadelphia & Delaware, jeez what dumps. Which is worse ? We don't want a messes like that in Queens !!


You don't think we have an army of illegal Mexicans and south americans here too? And illegal Chinese and illegal Indians and illegal Pakistanis? You think that we don't have illegal everything up here as well as the army of homeless people? You must be living in Delaware for way too long then!

We have a 2.5% vacancy rate and people need years of tax returns and 3 months of rent to legally get on a lease . There are 8.5 million people in NYC. We don't have enough housing

Our infrastructure in many places is at its limits. Sewage, postal service, transit, schools, sanitation...all packed to the limit. We can build as high as we want, but we will not have enough of those critical services, and then what? Just look at elmhurst/jh/corona/Woodside/astoria. Packed to the gills, constantly increasing density, but still lacking infrastructure because the city can't add enough to keep up with the population. Is that what we should all aspire to?

"We have a 2.5% vacancy rate and people need years of tax returns and 3 months of rent to legally get on a lease. There are 8.5 million people in NYC. We don't have enough housing."

We overdeveloped the hell out of LIC, Williamsburg, etc. and the problem is worse now. Why? Because we need low income housing, not "affordable" housing or luxury housing. But no one is building that.

So you are saying an investor should not maximize profits when legally allowed?

Perhaps you should request a pay cut, or put all of your investments into non interest bearing accounts?

There is an answer: "The Projects".

How is that working???

Yes Williamsburg was over developed but NYC was already behind on creating new apartments so it only provided housing for the upper tier . The only way to get rents down is by increasing the inventory until the vacancy rate is higher. Landlord charge high rent went the vacancy rate is low. We need 100,000 more unity by the end of 2016