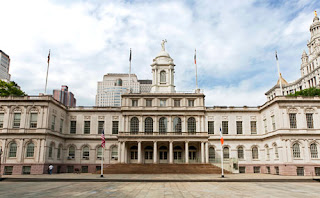 City Hall is where the government does the people's business — but it's awfully hard for the people to come in and take a look.

A new bill by City Councilman Jimmy Van Bramer would change that, requiring City Hall to be open to the public on weekends.

“It’s shocking in some ways that this building is not accessible to the public,” said Van Bramer (D-Queens), who chairs the cultural affairs committee. “It’s one of the most important structures in all of New York City, and you have people who come to the city, people who live in the city, who tells me they have never been here, they have never seen it.”

The legislation, which will be introduced Tuesday, would require the Department of Citywide Administrative Services to open the building to all comers on Saturdays, Sundays, or both.
Posted by Queens Crapper at 10:30 AM

Once word gets around to the homeless who need safer warm places to encamp, this policy will be reversed pronto.

How about if they let people protest on the steps of City Hall again?

What the hell why not open it to the public during the week? No one is there anyway...

Has anyone realized that most governmental services are now online?

Is there any real purpose, other than tourists and homeless wanderers stopping in to bid greetings and well wishes?

It is truly incredible idea when you need not pay for for it.

Just pass the costs onto We the People...

Jimmy is under a lot of pressure from his community because they are getting his number.

Therefor the bridge walk stunt which the Queens lapdog press put on every front cover. Come on guys, get with the program!

That crap doesnt work outside of the snowflakes and seniors.

Never mind that, how about getting the Council to return our calls and emails.

Jimbrowski wants a taste of mayoralty before he announces his run. This and the recent "protest march" to Trump's weekend midtown oval office. Here's your first challenge in the primaries, and why not, he's seems out of central casting for NY's first openly gay mayor. Like a lame version of Harvey Milk.

I think the constitutional right to free assembly gives us divine permission to protest in on the city hall steps, without the aide of some opportunist elected official and some choreographed event. But the stupid war on terror and the patriot act took care of that. We sacrificed freedom for security a long, long time ago.

JQ LLC said...
"... But the stupid war on terror and the patriot act took care of that. We sacrificed freedom for security a long, long time ago."

I wil not forget President G.W. Bush signed the first "Patriot Act"' HOWEVER, our current President Barack Hussain Obama has only allowed increased powers and an even increasing enormous erosion of the few and limited freedoms we have left!

So, I ask, who is the greater threat to our freedoms?
The so called conservative, President Bush, or the current President, Mister Obama?
You can opine what my answer is.
This overreacting boondoggle is what we would expect from the far right.
I had a sliver of hope that the so called liberal, "progressive" formal Democratic Party leader would have eliminated such a horrific mess.
It just gives those who claim that President Obama is a fascist, socialist, communist dictator much evidence and justification...

Jimbo really wants to retire.
Is up to the voters to make it happen.

No one is innocent.

>This overreacting boondoggle is what we would expect from the far right.
>I had a sliver of hope that the so called liberal, "progressive" formal Democratic Party leader would have eliminated such a horrific mess.

I expected Dubya Bush to be the worst President either, and he didn't disappoint.

I expected Obama to be much much better, and he wasn't.

For $3000 you get serviced by the man himself. Kneepads and whole shebang.

I Said:
And he gets to write off his mortgage payment as a business expense because he used his home to hold a fundraiser!!
you cannot make this shit up....

What a phony!
His office is locked to real public access anyway.
Van Bramer likes to make theatrical shows of everything.
Meanwhile he does nothing real to improve the quality of life within his own district.
Backdoor politics Jimmy as usual.
He has no problem being owned by developers who have overbuilt his district.

Who is going to pay for the cost of extra security Councilman Jimmy?
The gay rights movement?

or all of the illegals that he is fighting for -

The first ever Skillman Avenue Holiday Festival will be taking place this Saturday.

The Skillman Project, a collaboration of businesses located on Skillman Avenue, is hosting the festival to bring the community together and celebrate the new holiday lights strung across the avenue.

The new lights are a significant upgrade from the past when snowflakes illuminated the street.

The Skillman Project is closing the Avenue down between 51st Street and 43rd Street, and will have activities lining the business corridor. The cross streets will remain open to allow for cross traffic.

The festival will run from 4 to 8 p.m. with food, drink, music and activities offered by local businesses and community groups.

“We hope this gives people a chance to come hang out, get in to the holiday spirit and see their neighbors,” said Jean Clancy, one of the organizers and a co-owner of Claret Wine Bar. “This is such an amazing neighborhood and a diverse community, and it will be a great opportunity to come out and enjoy the neighborhood.”

The centerpiece of the event will be the Christmas tree lighting by Councilman Jimmy Van Bramer at 6 p.m. at Sunnyside Reformed Church at 48th Street where a stage will be set up.

Many activities will line the Avenue throughout the afternoon and evening. Local choirs, carolers, artists, dancers and marching bands will perform before the tree ceremony.

After the Christmas tree lighting, children will be able to get their picture taken with Santa at a special grotto set up at 49th Street and Skillman.

There will be a professional photographer on hand to take photos, which will then be posted to the Skillman Project Facebook page after the event.

Beginning at 4 p.m. there will be a DJ playing music, food and drink specials at the local bars and restaurants, a wreath making workshop and various arts exhibits.

Throughout the night there will also be performances from local theater, dance and music groups, caroling by the girl scouts and PS 150 school kids, and a holiday raffle that will be drawn at 7:30 with about 35 prizes, including tickets to the Nutcracker and Carnegie Hall, along with prizes from local businesses.

In addition to providing a fun holiday outing, Clancy said the businesses also want to give back to the community.

Most of the businesses lining Skillman will have collection boxes for Toys For Tots. Residents are encouraged to bring unwrapped gifts and put them in one of the boxes. The toys will then be distributed to children in need.

“It is really a community effort to bring something spectacular to the neighborhood and brighten up the street,” Clancy said, adding that funding for the event had come from many different community organizations and stores, Van Bramer’s office, and the Chamber of Commerce.

“We want to make Skillman somewhere everyone wants to go out and have a drink or a bite to eat, to go shopping, and really just get in to spirit of the holidays,” Clancy said.

>Who is going to pay for the cost of extra security Councilman Jimmy?

Anti-gay graffiti reading “kill fags + dykes” was posted on a bus shelter in Astoria over the weekend.

The hateful message was scrawled on an advertisement for a gay pride celebration posted at the bus stop at Steinway Street and 31st Avenue. The graffiti comes on the heels of a spike in hate crimes throughout the neighborhood.

A twitter user pointed it out to Councilman Jimmy Van Bramer yesterday, who then went out and cleaned it up himself.

“Hate crimes are on the rise. It’s on all of us to step up and say loud and clear that these are not our values and this is not normal,” Van Bramer said in a statement.

“When a constituent notified me of the hateful and homophobic graffiti on this bus shelter, I reported it immediately, but couldn’t stand to see it up a second longer—so I cleaned it up myself. I know that in Queens, we value and celebrate our differences, and when we come together, love will always trump hate.”

Since the election, there has been an increase in the number of hate-related incidents reported in Astoria.

On November 17, an Uber driver recorded a man screaming anti-Muslim slurs at him out of his car window while stopped at a red light in Astoria.

On November 19, several teenagers were sitting outside of a bar at 27-35 21st Street when three men approached and allegedly made anti Muslim comments, leading to a fight. The encounter ended with a 17-year-old Muslim teen in the hospital after getting hit in the face with a glass bottle.

Police have also found swastikas painted in Astoria Park and at the 30th Avenue subway stop.

Hate crimes throughout the city have been up by more than 30 percent this year compared to 2015, which the Police Commissioner attributed to the hateful rhetoric surrounding the election.

Be prepared! #QueensResponds mass action is a self-defense, anti-bullying, upstander and de-escalation training, so we all know how to respond in hateful situations. Join us on December 14! Thanks to Jimmy Van Bramer!

this was posted on JVB page -- unbelievable for sure -

Vandals are usually smart enough to wear hoodies and keep their faces obscured.