New 421a regulations will cause NYC to lose a lot of $ 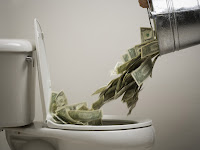 Developers have warned that Mayor Bill de Blasio's plan to build 80,000 units of affordable housing would be in jeopardy without the state's 421-a tax break. But a proposed update to that law could actually cost the city billions of dollars in what advocates describe as a "wasteful giveway."

Under a new 421-a agreement up for approval by state lawmakers, the Real Estate Board of New York trade group that represents developers says it needs the program to put shovels in the ground for affordable and market rate rentals.

But an analysis from the Alliance for Tenant Power — a coalition of housing, community and legal service groups — said the new program would cost the city $2.4 billion a year in lost tax revenue.

That’s double the $1.2 billion the program cost the city in 2016, which only yielded about $100 million a year worth of affordable housing, the group said.
Posted by Queens Crapper at 5:37 AM

Those feral dogs at REBNY thinks that our tax dollars is their disposable income.

And that's apart from the fortune lost by blatant violation of the last go-round from the flagrant violations by landlords de-regulating uncountable numbers of apartments while claiming undeserved benefits. Conditions of this regulation need to be diligently enforced!

$1.6 Billion on the homeless.....and climbing! Something's gotta give. Something is dreadfully wrong with how the city is handling this issue.

$1.6 Billion on the homeless.....and climbing! Something's gotta give. Something is dreadfully wrong with how the city is handling this issue.
---

Aboslutely not. You do not understand how the country organization works. This is exactly as planned.

City govenment is not to govern: that is what 311 and their bogus civics and community boards are supposed to do - institutions that exist to shut you up or discourage you.

The Democratic Party, like a virus, has hijacked government for its own purposes.

For example, governing enables the paty to take public taxes for programs like the homeless.

Its purpose is to attract needy people to NYC so that insider landlords can get a great return on donations to people, like, say Joe Crowely, so they can rent space at crazy profits for shelters. Party drones can be employed for programs around those needy, and, the point of all this, is a system for future Democrates to be groomed.

They in turn, graduate from the program to be employed to bring more needy into NYC. It becomes a cycle, sort of like the Sorcerer's Apprentice.

Its all so simple if you accept the facts in front of your faces.

Shut up and pay your taxes sheeple !