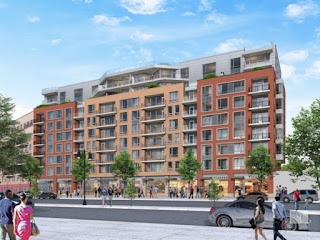 Rockaway residents who have been around for a while will probably remember fondly the Beach Club restaurant and catering space where many locals held their important events and where many local meetings were hosted by Ken and Steve Good.

Soon, however, the abandoned Beach Club property and the former Spin City gym next door will become four nine-story mixed use buildings with shops on the first floor and residential units above. At least, that’s the plan.

As detailed in onrockaway.com a month ago, it will be part of a larger complex called Seaside Landing, which will feature market-rate condos and affordable housing. The building would hold 142,660 square feet of residential space and 17,652 square feet of commercial space. And, if Mayor Bill de Blasio has his way, it will also be mandated to open about 30 percent of those units to the homeless.
Posted by Queens Crapper at 12:05 AM

From one of the "pioneers"/creeps about this "groundbreaking" development. From goddamn Brooklyn of course.


Mark Caller, 44, the principal partner, said he had been looking at the Peninsula Hospital site more than a year ago to do affordable housing but said “We are not affordable housing developers” and plans there fell through. It was around then that he started taking a closer look at Rockaway. “I’m from Brooklyn but I bought myself a bike, rode over the Marine Parkway Bridge. I went to 116th Street and said, ‘I want to do something here.’”
Of the Seaside Landing project Caller says, “I believe this will completely change 116th Street.

The way these people speak of their projects and their lofty goals is just comical. ("I bought a bike and rode over Marine Parkway Bridge, oh did I mention Brooklyn", can you be more pandering) The messed up thing is development like this gets approved even though there is still poverty and blight in the area. A few blocks away is a men's boarding house that has the seediest elements of society, a lot of them are child molesters. And of course the effects of Sandy, despite the new boardwalk and the new sand, is still visible and palpable because of future sea level rising from the accelerating effects of climate change. Well, because of ambitious jerks like this and the persistence of neighborhood protests, the homeless have to be sheltered no matter how opulent you design your units.

Note that he was after the Peninsula grounds. These lowlifes love destroying hospitals for faux luxury and upscale living.