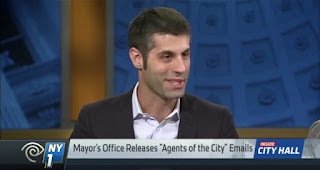 Mayor Bill de Blasio's office has released hundreds of pages of emails between the mayor, his top aides and Jonathan Rosen, a key unofficial adviser who city officials declared to be an "Agent of the City." NY1's Grace Rauh filed the following report.

New emails released by the mayor show Rosen is invited to major policy meetings and included in high-level internal discussions.

But while he may be treated like a top City Hall advisor, he is far from an official one. He runs an influential private consulting firm, BerlinRosen, with clients who have business before the city, including powerful real estate firms. And the state now considers some of the work he does to be lobbying.

But that did not stop City Hall from including Rosen in an August 2014 meeting about the mayor's affordable housing agenda. He was the only non-city employee to attend.

Rosen was also asked to come to Gracie Mansion to discuss the city's strategy in Albany.

Government watchdog groups have criticized Rosen's close ties to the mayor and argued he and other outside consultants are part of a shadow city government.
Posted by Queens Crapper at 1:08 AM

I am waiting for the bottom to fall out when NYC declares bankruptcy . It's coming soon my friends. Time to high tail it out of here.

The timing for this long overdue release is grotesque. Like we should be thankful for this corrupt mayor for giving us this belated transparency.

Berlin/Rosen are rapacious opportunists and have practically, actually have shaped this illegitimate affordable housing policy. Which may explain why the AMI standards are out of reach for a majority of citizens where these plans are taking place, especially now it's in the genesis stages in East Harlem and East NY. It also explains the decision by the NYCHA stooge Shoya to destroy project playgrounds and parking lots to build towers on it despite the utter lack of space and what such construction will do to the environment of the people already living there. And the others that were inferred by Ms. Rauh could be hoteliers profiting off the homeless crisis being manufactured by The Blaz, Banks and Lil' Lincoln.

A lot these are not that revalatory because these stories have been reported in the past year. AT&T/NY1 now known as SPECTRUM should not get much credit here because the station as gave our duplicitous corrupt mayor an outlet to address the public he supposedly serves to avoid the press junket (mostly Marcia Kramer and the NY Post, the latter being surprisingly good covering his awful exploits with objectivity). Even Grace and Errol sugarcoated the correspondence that these fiends had with each other, and the parsing of words displayed couldn't look more defensive and obvious. It's like Berlin Rosen is in the same studio with them. In fact this segment looks like our mayor and his agents are bragging about their shadow govt.

And what possibly, for a foia release, could justify redactions, this isn't the CIA we are dealing with. Unless overturning deed restrictions and manipulating rental market rates fell under the purview of that advisor who used to work at the UN

Recall when Mayor Big Slow went to Trump Tower to meet with our twitter vomiting leader. Considering that De Faustio's last meeting with a billionaire elected only led to continuing his demented policies for enriching his friends and himself makes me wonder if he asked Trump to get rid of Preet.

In fact, the way the Big Slow runs and operates city hall and how he initially manipulated his base running as a populist is no different than how Don Worthless ran his campaign and how he will benefit personally after Jan 20. (well, in the Big Slow's case, sans the violence and bigotry)

How is this different from previous mayors? didn't lobbyist always run the place?

He looks like a Coney Island barker-sheister in a suit.