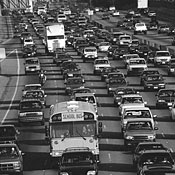 The following was published by the Tri-State Transportation Campaign. Queens Crap will reserve judgment on this one. We'll let you decide whether you agree with what they wrote. One thing is for sure, however: SOMETHING needs to be done about all the traffic in Queens. When you serve as the gateway between Manhattan and Long Island, it's inevitable that traffic will be a nightmare!

Discussion about congestion pricing in New York City continued over the past few weeks, with the Manhattan Institute releasing results of focus group discussions of the issue. Bruce Schaller, the transportation consultant running the groups, found that support for congestion pricing among New Yorkers is mixed but not the political hot potato many think it is.

The study found that New Yorkers are especially attracted to congestion pricing if they think it will increase travel choices, be equitable, and reduce travel time in severely congested corridors. Overall, the findings were consistent with a Tri-State Transportation Campaign survey that found New Yorkers evenly split on applying a London-like congestion pricing plan to New York (MTR #545).

Knee-jerk opposition to congestion pricing in any form came as usual from Queens politicians, now coalesced with the AAA and parking industry as the Committee to Keep New York City Congestion-Tax Free. The committee is headed by former NYC City Council member Walter McCaffrey. The group says it supports improvements in transit service though offers no way to pay for them nor identifies clear entry points for discussion of such plans, such as the next MTA capital program.

Strangely, six of the seven bridges or tunnels that connect Queens to other boroughs (and most of Queens to the Rockaways) already have tolls. So is the big fuss in Queens really just about keeping the chronically-clogged Queensboro Bridge toll-free? It is true that Queens connections to some of the free bridges in Brooklyn are pretty direct (if one were driving from eastern Queens to City Hall, for example) but the big shifts in free versus paid car access to the central business district under the Manhattan Institute plan would be in Brooklyn and The Bronx, rather than in Queens.

McCaffrey told the New York Post that congestion pricing is a tax that would “hurt those just trying to make ends meet” who “have no choice but to drive.”

But the data contradicts such statements, as Bruce Schaller noted recently in the Gotham Gazette. Most people who drive in New York are in fact wealthier than those who take transit. Schaller notes that Manhattan-bound auto commuters from the outlying parts of Queens, Brooklyn and Staten Islandearn 35% more than their more numerous counterparts who take the subway. And the fact that, according to the Census, only 28% of Manhattan-bound commuters who live in eastern Queens, southeastern Brooklyn or Staten Island drive to work proves that most people do, in fact, have access to transit. Driving into Manhattan is a choice, not a necessity.

According to the Tri-State Campaign public opinion poll, Queens residents are not overwhelmingly opposed to pricing policies to reduce congestion, as McCaffrey’s group would like the rest of the city to believe. In fact, Queens’ residents are evenly split on the issue, with 44% for and 45% opposed.

See www.manhattan-institute.org and gothamgazette.com. For further results of Tri-State’s poll, www.tstc.org.
Posted by Queens Crapper at 12:00 AM

This is the same sleeze they are now trying to remove from Queens Plaza (called the McCaffrey Entertainment Zone by some of us wags)?

Instead of studies, why don't they talk to their neighbors like those of us in Queens do?

Everyone uses cars, including people of modest means. Why? Not only are we a car culture, but people, especially those with limited means, need them to save on time.

Now, once again, we are forced to inconvience ourselves for people that don't even live here (yet.)

Why don't they stop development until all these hidden costs are outlined?

I'll bet the authors either (a) don't live here, or (b) don't have to drive to work. Tolls are already ridiculously high. I pay $40 a week to cross the Throgs Neck Bridge daily. That's $2,000 a year - to subsidize the subway I don't ride. Congestion pricing assumes the driver has complete discretion to either NOT drive or to delay driving until a less expensive time. I don't know anyone who can dictate the time when they will go to work. And mass transit is not an option for many (I travel from Great Neck to White Plains. It can't be done on mass transit in less than two hours).

It's absurd to institute congestion pricing before they offer a real solution from driving to using mass transit from many parts of southeastern queens and other parts of nyc without some sort of a reasonable mass transit solution into manhattan.

From SE Queens just try taking the Q 40 the worst bus in all of NYC first to the jammed E train and then dealing with all of the delays on that train into the city with a travel time of over 1 hr door to door and tell me this is some sort of an alternative to driving,

I'm sorry, but this is just an attempt by the elite to make sure there's a little less traffic for their limos to get through or for them to bike through from their multi million dollar studio apartments to their jobs.

With the MTA tripping all over themselves spending billions to give the rich folks on the LIRR a one seat ride to Grand Central, the tourists a one seat ride on the 7 to the Javits and the folks on the upper east side a couple of blocks less to walk to the subway, not a thought is given to providing the working stiffs in SE Queens with any sort of decent mass transit alternative and now they want to hit them with even more costs??????

The East Side once had three elevated/subway lines. Right after WWII they tore down the 2nd and 3rd Ave els and floated a 2nd Ave Subway bond issue.

That was over 50 years ago.

No 2nd Ave subway was built.

In that time, the Lex has had to support the traffic of three lines. And 5 story tenements were replaced by 30 story towers.

Where is city planning?

City planning is not doing its job.

It is not helping the people who live here (and pay the taxes to support their salaries.)

Lets take care of the needs of people that live here -- now!! We need to stop all new building until all costs for taking care of our current needs are identified and reported.

Only then can we make a determination on the wisdom of new development.