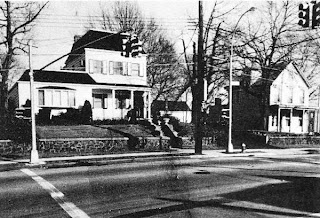 Major James Cating served in the Union army during the Civil War and received a battlefield promotion for bravery. In 1865, the war hero settled in Maspeth and established Cating Rope Works, which became one of the area’s major employers. He was also a master builder. Among the houses he constructed were three along 69th Street north of 53rd Avenue – one for himself, one for his brother and one for his sister. Two of these houses are pictured here. 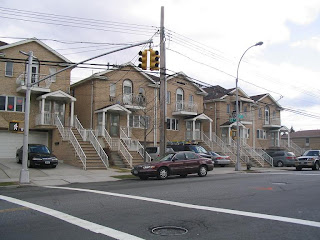 In 1998, the three one-family houses were knocked down and a dozen cookie-cutter two-family houses were built in their place, ruining both the history and character of that part of Maspeth, not to mention eliminating your chances of finding a place to park around there.
Posted by Queens Crapper at 12:00 AM

That is a shame. I remember those homes everytime I drove along 69th Street. There is no excuse for this, especially when you see the junk that replaced them.

I guess the question I have is how everyone that get a tiny bit of power, be it the community board, a minor office holder, even the local press, turn their backs on the community?

How did this culture arise? What can be done to change it?

Where is our leadership?

The answere to this problem is simple. If you command all forms of information and then skew the message, you will get people supporting somethng that is not good for them.

If they never get a chance to hear anything else, what are their options?

That's one reason this website is so important: it gives us a chance to freely express our opinions without the distortion of political agendas.

This is a real shame. I remember driving past these house with my Dad when I was a child thinking they were the most beautiful I'd ever seen. As I got older, I appreciated them and other (most of which have also been treated with the same "respect" as the Cating Houses) historical houses for the integrity and sense of history they brought to the neighborhood. It really goes to show you what some will do for a couple of bucks.

James Cating was a relative of mine, a great uncle by marriage. I remember visiting Cating Rope Works with his grandson, my Uncle Bill Cating. I found this information about his Maspeth houses while researching the family's history. Sad to see part of the family's legacy dead-end this way.