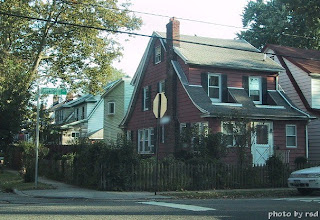 Sometimes, when homeowners get reported to the Dept of Buildings for having an illegal occupancy, they get mad. When they're actually caught with an illegal conversion, they can get furious. They want to "get back at" the people that reported them. 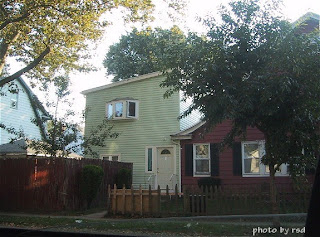 With the anonymous complaint system in place, how do they seek revenge on the one person who reported them when they don't know who it is? 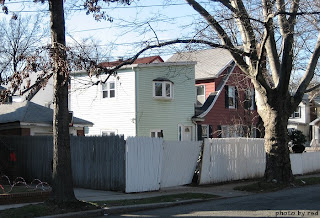 Heck, they might as well get back at the whole neighborhood, then.
This is one homeowner's intelligent response. He had a 285 square foot "horizontal enlargement" approved by the beauty pageant people at DOB. Yes, this green monster attaches itself to the original house like a parasite. Pure beauty, wouldn't you say?
Posted by Queens Crapper at 8:00 AM

Looks like an enlarged "outhouse" from a mining town in the "Olde West" What an addition or is it a subtraction? If this kind of construction is allowed to multiply it will divide the overall cohesive appearance of many a neighborhood's existing beauty. This deserves to be one of the contenders for the "Crem d' la Crap" award to be presented at the end each year! D.O.B. should be re-named Department of Offensive Building for its complicity in this crime!.........VERDI

What kind of architect and builder would put up something this hideous and out of character? I built better stuff out of legos when I was 5.

You know, on reading the papers, from their pro-building rants it seems that the biggest thing in everyone's mind is MORE HOUSING!!!

Wonder why those points are under reported?

Just think of the effort to bring in jobs, or the work that requires an improvement in choices, or the hard choices for better health care.

In exchange for campaign funds and a few spins from the press (which stands to earn $ from the gravy train like everyone else, except John Q Public) its easy to turn the farm over to the developers.

No work needed. They just do everything.

Gee, the two buildings are different colors. And the fence is kind of falling over. How charming!

They will say we are anti-this and anti-that and we don't think that Queens is such a wonderful place and how we are anti-Queensite and .. and ...

When we are just anti-developer.

Remember. Whats good for the developers is good for Queens.

YOU BETTER TAKE MY ADDRESS OFF YOUR SITE. AND THE PICS.

I used to know the people who lived in that house in the 70s. It was very cute, and charming. Now it looks like a JUNK YARD.