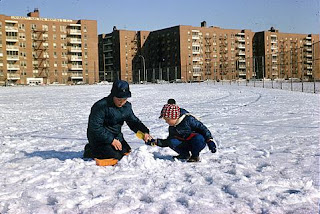 This picture shows the Bucknell on the left in the background during the '60s. I'm not in the picture, it's a photo of a friend and his brother. But notice the attractive, Soviet-style architecture, so familiar to anyone living near Chernobyl. It was built by Lefrak around the same time as Lefrak City. The development was called University Park, because each of the buildings were named after colleges - Notre Dame, Tulane, etc.

Other than a regular supply of cockroaches, there was nothing really wrong with the place. It was basic, working-class housing. But it certainly helped set the trend for the ugly housing that would soon sweep across the borough. Would it have hurt to invest just a little in an attractive design? I suppose it never crossed their minds."

Could Queens Crap have originated with the Colden Street apartments?
Posted by Queens Crapper at 12:00 AM