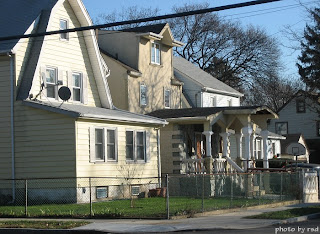 "It started as a small growth in the front, and just kept getting bigger and bigger until the neighbors started to wonder what the heck was going on.

First the porch, then the attic, and then this monstrosity emerged from what used to be a decent-looking home at 92-87 224 St. 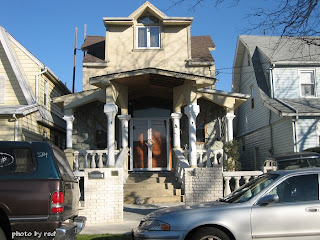 DOB's response to a complaint about the creature in the front? A violation for "not having the plans on the premises." A simple little violation that's used when the inspector really doesn't want to give out the summons the homeowner deserves. Hey, it's still a violation, right? Well, it's easily dismissed, once the plans show up. And of course, no need to pay a fine, because the violation was "cured." 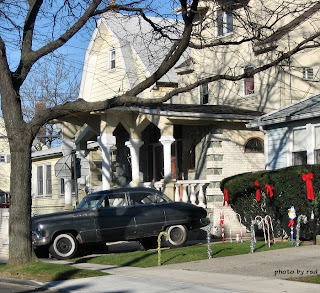 Meanwhile, the appendage is still there, and the complaint is closed.
But wait, what about that illegally enlarged attic that will be used for (wink, wink) storage? Pay a $250. fine, and go on your way. Sure, there's still an "uncured violation," but you really can't expect the poor innocent homeowner to remove it all, can you? The nerve of you to even think that."

A close look at the 2nd photo shows that after all this time, the right side ceiling still isn't finished, and the holes for the light fixtures on the four pillars are still open with bare electrical wires hanging out.

The pair of white "storm doors" in the front aren't storm doors at all, but they're heavy-duty aluminum and glass storefront doors, the same type that are used on stores throughout NYC."
Posted by Queens Crapper at 12:00 AM

Why doesn't he just add a few domes to the roof and have a mini Taj Mahal?

This website is great! Thanks for all you are doing.

You know, the funny thing is if you go to those places that all the politicians have their summer homes, or where the developers live, you don't see stuff like this.

This is a joke. And those who let this happen think the people that live in the community are big jokes, too!

loser..all you idiots are losers post a picture of your fucking homes dumbasses!