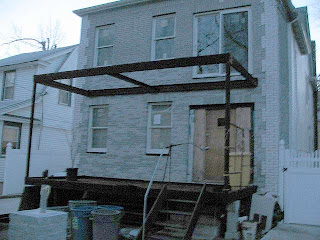 Today's Queens Crap comes from East Flushing, on 161st Street near the Auburndale border. Though the Broadway area north of Northern Blvd is protected, things can run wild south of the Boulevard, and intrepid neighborhood improvers are busily carving buildings up.
This house, on 161st between Sanford and 43rd Avenues, had been covered with temporary insulation for over a year, but in the past few months, the owner has added some ugly two-tone faux bricks, and gotten a front porch and fence started. "Started" is the operative word, because the metal framework and concrete posts have sat there now all summer and fall, just like this; note the garbage pails and wooden front door.
I don't think the neighbors are complaining. Why, the guy in the house on the left completely paved over his front yard to park his SUV. 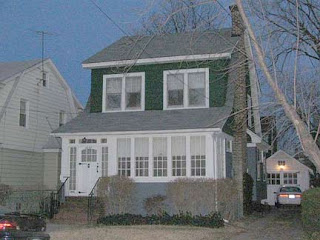 For decades, East Flushing looked like our second picture: tidy cottage-style homes, with grassy front lawns and garages in the back.
That's so 20th Century.
Posted by Queens Crapper at 12:00 AM

Why don't you sponsor a neighborhood tour with members of city council, and the press, and record their spin when confronted by these buildings.

I think that the term "re-muddeling" is appropriate here. As they say on the "Roadshow"......"there are some condition issues here" (in fact many). The owner of this house has taken a vintage quality "antique" and ruined the asthetic appeal that it once had , thus reducing the value considerably. I'm sure that there are plenty of "country-clods" out there, who think that it's worth much more now. Well, they're welcome to buy it! If it were given to me free of charge, I'd bulldoze it and create a beautiful garden and contribute it as a side yard to an adjacent deserving neighbor!........VERDI