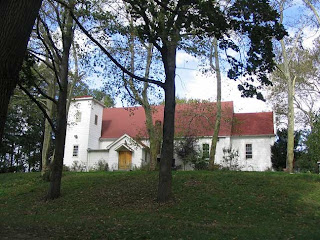 This scene is in West Maspeth. The area was once made up of the summer homes of wealthy Manhattanites, such as Governor DeWitt Clinton, who planned the Erie Canal from his mansion which sat on Newtown Creek a stone's throw from this, St. Saviour's Church. The land became overwhelmed with factories in the 20th century, and now it is heavily polluted. There is a truck route and a diesel trainyard across the street from this property. The 185 trees upon the 1.5-acre green space, many of which are old-growth, act as a buffer between all this pollution and the pre-industry homes on the other three sides of it. 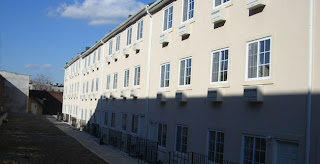 The developer who bought the property last year intends to demolish the structures, destroy the trees, level the hill and build 71 units of Queens Crap. At right are glimpses of the developer's other properties. 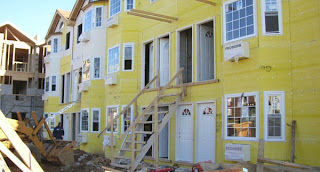 The councilman in this area, Dennis Gallagher, was asked to help but told his constituents there was "nothing he could do." When they got angry, had the developer shut down and threatened the passage of a required zoning change he had applied for, the developer hired the Parkside Group, a powerful lobbying firm. 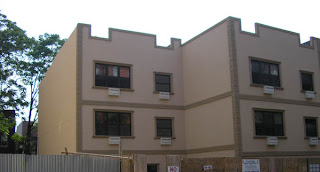 One of the founders of the firm happens to be the councilman's best friend and donates tons of money to his campaign.
All of a sudden, Gallagher found that there was something he could do - and now he is lobbying the community board for approval of the zoning change on behalf of the developer!

With our elected officials shamelessly doing the bidding of developers in exchange for campaign contributions, is there any mystery as to why we have so much crap here in Queens?

The St. Saviour's story can be read in detail here.

The Juniper Park Civic Association is asking Mayor Bloomberg to have the city purchase the property as part of the initiative to have every NYC resident within a 10 minute walk of a park by the year 2030. You may ask the Mayor to arrange for the city to buy St. Saviour's so that the kids who live in this area will no longer be forced to play in the parking lots of warehouses. Yes, that's what they are doing now. Submit your suggestion here:
PlanNYC2030 - Open Spaces 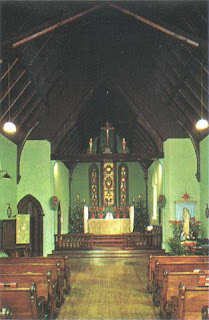 This is how the interior of St. Saviour's looked in 1961 at Christmastime. Queens Crap hopes that Mayor Bloomberg receives a visit from the ghost of Christmas Future, sees what a mistake it would be to lose this place, and becomes "the man who saved St. Saviour's." This place should be preserved for the people of Maspeth, who, as evidenced by this blog, are inundated with Queens Crap. One New Year's resolution for a group of residents is to continue to fight to make sure that the entire parcel is protected for the benefit of present and future generations.

In parting for our Christmas Eve celebrations, let's recall a quote from a famous poem penned by Clement Clarke Moore, descendant of original founders of western Queens:

"Happy Christmas to all, and to all, a good night!"
Posted by Queens Crapper at 12:00 AM

The Landmarks Law is not applied equally throughout the city. It is discriminatory.

The communities that are already designated do not fit the economic or demographic profiles of NYC.

Ethnic and working class communities are ignored by both the commission and the 'established' preservation community.

If St Savious AND/OR the lot is developed, the Landmarks Law should be overturned and all current designations throughout NYC thrown out the window.

When the elites in Manhattan suddenly know what it feels to be from Queens, they will certainly sing a different song.

This is not idle chatter. The preservation community is served notice.

As to the future, well, they have no one to blame but themselves.

You have a proposal for making this a community education center and park.

Why is it not covered by the press?

Who is suppressing this story?

Why is it that those proposals from developers are always lovingly depicted in the local paper (with no delay!) and presented as as an established fact, a done deal?

The press never gives it thorough coverage, no real questions on envirnmental impact or feasibility or costs for infrastructure - just something right off the architect's desk word for word with perhaps a window dressing from the community -- if they are in favor, of course.

Why does not a local paper do something like this for a change on the St Saviour proposal?

As with other 'development' proposals, of course the press should also ask for Galligurr, Kats, and the local community board on their position for this idea.

A pointed question: why is it that the needs of the community's youth do not trump (no pun indented) the developer's desire to make money?

Isn't that powerful lobby firm the Parkside Group led by Evan Stavinsky, the same fellow that was the chief of staff for (ahem) Brian McLaughlin?

Maybe someone should investigate their activities (if they insist on remaining involved in St Saviours)?

Better yet, why doesn't someone ask the Staviskys why children should be denied a park for yet another developer to make money (and who doesn't even live or vote in Maspeth.)

It's clear that Councilman Gallagher has gone to the "Darkside" side of "the force", as the "Parkside Group" is known. This lobby group, which includes that "son of a Stavisky" (a disgrace to the memory of his father Leonard) often represents developers and the various "rich & famous!" Does Gallagher have a drinking problem to have allied himself with such a community destroying organization? If Dennis really represented his constituents he would be pulling out "all stops" to save St. Saviour's not just a thin "token effort"! Happy holiday to you Councilman, even if it's not in keeping with the situation!

In the fall of 1963, when the demolition of the old Penn Station began, the NY Times ran a famous editorial about how future generations would judge our society not by what it built, but by what it destroyed. Forty-three years later, it appears that NYC's "Power Elite" still don't get it.

NY's Power Elite gets it all right

They write grants as if they represent the five boroughs, and then spend it all on Manhattan.

They made certain the Landmarks Commission remained active until they get their neighborhoods into the received canon. Then they close the book when the outer boroughs show up.

They go about to undermine everything the grass roots do in the outer boroughs and make certain they set the agenda and dialogue in preservation.

They also make certain that the outer boroughs have a few do- nothing 'Uncle Toms' to represent those communities -- and more importantly, to keep their fellow neighbors in check and in the dark.

The only problem with this wonderful little scheme is now the developers, who were unmolested in the outer boroughs, are now taking these finely honed skills to Manhattan.

Much to the amusement of us in the outer boroughs!!