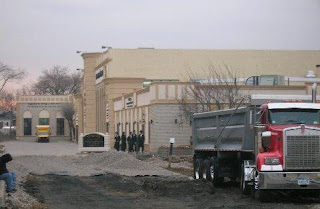 After a long struggle, the owners of the former Monarch knitting mill have finally received a certificate of occupancy, bringing their vision of turning the site into a yeshiva a step closer to fruition.

The certificate of occupancy, granted by the Department of Buildings to YGS Congregation Inc. on Monday, calls for a two-floor, 28-foot high structure with a lecture hall, a kitchen and cafeteria, a mikvah (a traditional Jewish bathing room), a library and classrooms for the yeshiva.

The site has been the focus of controversy for several years, but in recent months (as previously reported by the Times Newsweekly) the Glendale Civic Association had announced plans to file a lawsuit against the city and the DOB, demanding that the city crack down on what the GCA claimed to be numerous code violations by the developers at the yeshiva site and other locations in the area. The lawsuit also seeks to end the city’s self-certification program.

In November, representatives of the GCA told the Times Newsweekly that the DOB was alerted in October 2005 to as many as 20 buildings code violations found by an architect hired by the civic group to examine plans for the yeshiva site. At that time, it was noted, the blueprints called for the construction of transient hotel rooms to ostensibly house students overnight. The GCA had contested that these rooms would violate existing zoning statutes. However, the DOB reportedly did not issue any violations to YGS.

New plans for the yeshiva were later submitted to the DOB, where the hotel rooms were removed and “classrooms” were added to the plan instead. The GCA contends that the revised plans did not differ greatly from original blueprints, and that the developers were trying to circumvent DOB regulations.

The GCA’s private architect again looked over the plans and again allegedly found 20 building code violations. However, the civic claimed that the DOB did not investigate the plans any further.

It was noted that the DOB had issued a temporary certificate of occupancy to the developers in order to host a Sept. 17 function at the site.

According to the Department of Buildings’ website, 61 complaints have been lodged against the site over the past two years, most of them coming this year.

Gary Giordano, district manager of Community Board 5, told the Times Newsweekly on Tuesday that “we pretty much expected that this was going to happen pretty soon.”

He noted that he still is worried about the issue of students staying overnight in the structure; however, he has been “informed that no one’s going to be sleeping there.”

He also mentioned two other issues that concern him:

• Up to 14 school buses a day will be used to load and unload students at the yeshiva. Giordano stated that to perform those duties on 88th Street would cause major traffic problems.

• Safety issues involving the entrances and exits of the yeshiva.

Giordano noted that, because community boards are city agencies, Board 5 cannot be a party to the GCA’s lawsuit.

“When I’ve called him, he’s called me back,” Giordano said.

The moment many Glendale residents have been trying to forestall for over two years came at 10 a.m. Sunday, when a line of buses pulled up to a new yeshiva at 88th Street and began unloading hundreds of students for their first day of class. The United Talmudical Seminary, located at 74 10 88th St., opened to an initial 600 pupils, despite loud objections by civic leaders who claim the facility will drain local resources and add nothing useful to the community.

The opening came six days after the city Department of Buildings temporarily certified the property for complying with city zoning, electrical and building ordinances. That approval defied calls by opponents last month to not issue a certificate of occupancy until the school had obtained a license to operate as a vocational school from the city Department of Education. The opening has also renewed concerns about increased traffic and noise problems. Since plans for its construction were first unveiled in early 2004, the yeshiva has drawn fire from residents who worry the school’s 11 buses will block roads and tie up traffic as more than 1,000 students arrive daily from Williamsburg at 6 a.m. and depart for home at 10 p.m.

“We’re going to have major problems with this school,” said Dorie Figliola at a Glendale Property Owners’ Association meeting last Thursday. “Now we have to wake up to the sound of buses idling in the street at six in the morning and blocking traffic on our way to work.”

Yeshiva officials were quick to allay these concerns, saying they had deliberately scheduled classes so as not to interfere with morning and evening traffic, especially near P.S. 113, the 529 seat elementary school located just blocks away. In addition, bus drivers will only allow students to board or disembark within the yeshiva’s fenced perimeter.

“We have made a special effort to accommodate people’s concerns,” said yeshiva spokesman David Neiderman. “Check our record. We are good neighbors.”

But some residents remain unconvinced. As early as Sunday’s opening, locals witnessed several buses blocking the entire roadway as students disembarked in the street outside the complex.

Civic leaders also worry the yeshiva sets a dangerous precedent for rapid, large scale future development in the neighborhood. The Glendale Civic Association sued the city on Nov. 9 for failing to enforce its own building codes and improperly “delegating government responsibility to private citizens” through a process known as self certification. That allows architects to approve their own plans without input from the Department of Buildings.

Citing evidence compiled against the yeshiva for over two years, the civic association will argue at a Jan. 10 court hearing that self certification has allowed developers to routinely abuse the department’s authority and paved the way for rampant overdevelopment throughout the borough.

“The yeshiva is just one of the more egregious examples of this (problem),” said Kathy Masi, president of the group filing the lawsuit. “At some point, we all need to stand up and do something about this.”

The yeshiva site was first slated to house a transient motel, but developers scrapped the plan after learning it would violate M 1 zoning rules. The Brooklyn based United Talmudic Seminary then purchased the site and, after receiving city approval, began converting planned bedrooms into classrooms. The Department of Buildings shot down an initial proposal to build a 100 student dormitory at the site.

Since work began in early 2004, the property has incurred four violations. In January, it was also slapped with a stop work order after developers failed to provide proper paperwork to inspectors. In addition, the yeshiva has prompted 61 complaints from residents, who have alleged that crews were working on weekends, building beyond the approved limits and violating the stop work order.

According to the lawsuit, a former architect for the Department of Buildings, Joseph Trivisonno, conducted two independent inspections at the site in October 2005 and March 2006, and found that the structure warranted additional violations for shoddy construction and lack of fire escapes from the cafeteria. A spokeswoman for the department declined to comment because of the pending litigation.

“When this kind of thing keeps happening, over and over, we can’t just sit around and wait for the DOB to do something,” said Gabriel Tapalaga, the lead attorney in the suit, “because by the time they act, you’re stuck with one of these three story atrocities.”

Here's an article which appeared in the Village Voice last year which exposed how DOB allows developers and certain religious groups to get away with building just about anything in our sister borough, Brooklyn. When the borough commissioner tried to crack down on it, he got fired!
Posted by Queens Crapper at 12:00 PM

Will Queens produce another Comptroller with questionable ethics?

Councilman Gallagher's lack of enthusiasm for fighting this was glaring. His silence on the matter was deafening.

I think it would be a good idea to start advocating legislation to impose propert tax payment for all major religious houses of worship. Non-profit organizations? My eye. They own more property than any of us can ever hope to own. And influence government. Let them pay just like the rest of us.