SAYING NO TO CONDO 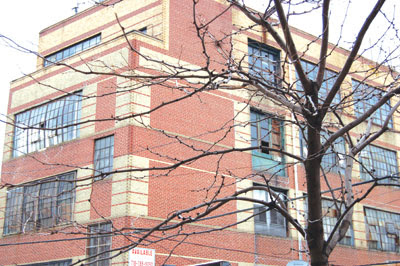 The owners of the site of a former knitting mill and gym located at 71-13 60th Lane in Ridgewood (pictured above) are seeking to turn the four-story structure into a 55-unit condominium building. Community Board 5’s Land Use Committee passed a resolution at their Dec. 6 meeting in Glendale rejecting a variance for the proposal, suggesting that the developer redesign the plans to reduce the number of housing units to be constructed. (photo: Robert Pozarycki)

The planned conversion of a former Ridgewood knitting mill into a 55-unit condominium took an early hit, as Community Board 5’s Zoning and Land Use Committee voted to oppose the needed variance at its meeting last Wednesday, Dec. 6, at the board’s Glendale office.

Members of the committee drafted and agreed to a resolution last Wednesday recommending that the entire advisory body reject the variance application submitted by the owners of the four-story building, located at 71-13 60th Lane in Ridgewood.

Board 5 was scheduled to vote for or against the committee’s resolution at their meeting held last night, Dec. 11. No decision was rendered by the board as of press time.

The decision came after the committee heard concerns from its members, as well as local residents who stated that the current proposal provides enough parking spaces for only half of the residential units slated to be constructed. The lack of available spaces, they intimated, would compound existing traffic and parking problems in the neighborhood.

Before being considered by the Land Use Committee, members of Board 5 first heard plans for the condominium during a public hearing held prior to the advisory panel’s Nov. 8 meeting in Middle Village.

The community board held the hearing to consider a variance application submitted by the developer, Ridgewood Equities, Inc. The variance would allow for the owners to bypass an existing city zoning law requiring that all residential properties have 30 feet of clearance between the building line and neighboring properties.

Christopher Wright, an attorney representing Ridgewood Equities, informed the Land Use Committee last Wednesday that portions of the building’s northern side (near 71st Avenue) and southern wall (near Myrtle Avenue) were too close to adjacent lots, measuring less than the required 30 feet of space.

The attorney noted that the variance would allow for the units to share the “air rights” of neighboring properties in order for the proposed condominium units to obtain air and natural light. It was reported that the property is predominantly surrounded by the open backyards of homes and businesses on 71st and Myrtle avenues. Without the variance, Wright observed, the developers would not be able to use window spaces in areas where the building does not meet the 30-foot requirement. As a result, he noted, almost half of the building would be rendered uninhabitable.

Paul Kerzner, a member of the Land Use Committee and president of the Ridgewood Property Owners and Civic Association, charged that the variance application denies the property’s neighbors of any opportunity to expand their homes.

“What you’re doing is taking value from those people,” he said. “If they wanted to get a variance to extend their property in the back, they would be precluded from doing that ... You’ve taken that property away from them without compensating them.”

Should the current building plan move forward, Wright stated, the developers would replace all windows on the property while also refacing the red and white brickwork. Additionally, he noted, contractors will restore existing fire escapes while installing two new elevators within the building.

The main entrance into the complex, Wright noted, would be located on the southern side of the property. All residents would enter through a lobby to be built close to the driveway leading to 60th Lane near Myrtle Avenue.

As noted, a total of 55 housing units have been proposed for the site, comprised of 15 one-bedroom apartments, 37 two-bedroom units, and three three-bedroom residences. The total gross sale value for all units is $20 million, Wright said.

To accommodate motorists living at the condominium building, the attorney stated, the developer will construct a 27-space parking lot in the rear yard of the building. Under the proposal, motorists will enter and exit the lot through a driveway leading to 71st Avenue, while the secondary driveway to 60th Lane would be reserved for foot traffic and emergency vehicles.

It was noted that the property currently remains on the open market, with the owners reportedly asking $6.5 million for the structure. Wright noted that the site must remain on the market according to regulations set by the Board of Standards and Appeals.

At the Land Use Committee meeting, committee members and residents living near the knitting mill called on the developer to reconfigure the parking proposal to provide additional spaces to condominium residents while also allowing for both driveways on the property to be utilized by motorists.

One resident of 71st Avenue noted that most families in the area currently have two cars, outgrowing the number of available spaces on local streets and garages. As a result, he observed, many residents are forced to park their vehicles several blocks from their own home.

Another resident complained that the proposed dual entrance/exit from the lot onto 71st Avenue is too narrow and would most likely lead to numerous accidents along the residential street.

Fred Haller, a member of the Land Use Committee, stated that similar condominium projects within the board’s confines have also created enough parking spaces to provide at least one spot per unit. In citing one example, he noted that the Glendale condominium complex on 69th Place near Luther Road built parking spaces on the first floor of one of the buildings, which was a former factory.

His sentiments were echoed by committee member Michael Hetzer, who is also vice president of Citizens for a Better Ridgewood. He confirmed the numerous parking problems in the area and urged the developers to create a number of parking spaces equal to the number of residential units to be constructed.

Kerzner intimated that the entire knitting mill may even be better suited as a parking garage for the community. He noted that a converted facility would provide up to 100 parking spaces for local residents and shoppers.

One resident who heard of the idea stated that providing additional parking would be “a home run for the community.”

“I asked the architect to put as many spaces as they could, which turned out to be 27,” Wright said. “Could we squeeze one or two more? Maybe. But there are certain turning radiuses that you have to have” in order for vehicles to get around the lot.

Wright added that the developer had considered three possible scenarios for lowering the housing units to be made available at the site. Each plan would increase the size of two- or three-bedroom apartments inside the premises.

In each case, Wright noted, the proposed number of units were lowered from 55 to between 48 and 51 apartments. He observed that the developer could lose up to $1 million in gross sales if the number of units is reduced further.

Committee member Theodore Renz, who also heads the Ridgewood Local Development Corporation, stated that the economic hit the developer could take by reducing units would be minimal, adding that the loss would be compensated through reduced construction costs.

Following Board 5’s vote, the variance will then be submitted to Borough President Helen Marshall for her approval or denial. Her decision will then be forwarded to the city’s Board of Standards and Appeals, which makes the final decision on all variances.

It was noted by Walter Sanchez, who chairs the Land Use Committee, that the BSA may still approve the variance application even if Board 5 and/or Borough President Marshall vote to reject it.
Posted by Queens Crapper at 6:00 PM

Isn't it nice that the BSA can still do whatever the hell they want and completely ignore the community board's vote?!?!? Great system we have here. It really stands for Bull Shit Administration.

And if they're going to 'replace all windows on the property while also refacing the red and white brickwork' then they're going to basically destroy its historical and architectural value anyway. Idiots.

The Board of Standards & Appeals is often , "affectionately", called....... the Board of Rubber Stamps! As quick as a developer's request for a variance appears on their desk, it gets their stamp of approval even quicker! .......VERDI

Isn't it interesting that developers make these expensive investments based on the assumption that they will easily obtain the variances they seek? And they have good reason for doing so. Has BSA ever come across a variance application that they didn't like?