A "Yikes!" from the Queens Gold Coast 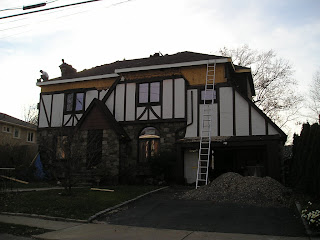 Submitted by P.D.G. representin' the other side of Queens:
"This house, currently in the process of being badly altered, is in the Weeks Woodlands neighborhood of Bayside. Until a decade ago, this area next to Little Neck Bay was chock-a-block with well-appointed houses and mansions, mostly built between 1890 and 1930 for the major stars of Vaudeville. The house shown above was a lovely late 1920s Tudor, located on 215th Street just south of 29th Avenue. Notice the totally inappropriate roofline that is being constructed - a multi-hipped roof - and has destroyed the Tudor-style gables that are the signature of this type of house. It speaks volumes of the lack of understanding of most "architects" when it comes to building form, style and substance. Picture taken in mid-November 2006."
Posted by Queens Crapper at 12:00 AM

What are these people thinking?!?

OMG! that house is almost exactly like the house I spent most of my childhood in Lansing, Mi. same colors and trim. my guess is there is a little bit of NYC all over the U.S. .......Scott