The sad condition of 162nd Street 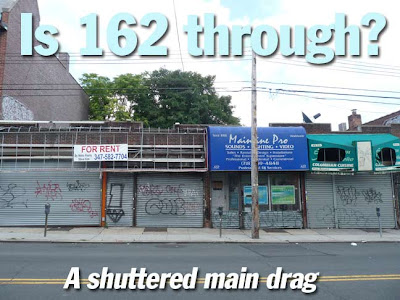 Click photo for story
Posted by Queens Crapper at 12:51 AM

It's a vastly overpriced street.

But the 5+ (Korean?) whore houses on that block are doing just fine!

And "OB's (sic) Cavem" is bustling
on the southeast corner of 164th Street and Depot Road.

Then there's that shady "barber shop" further north which was raided once for being a house of prostitution.

The world's oldest profession is where it's at for a businesses' financial stability during (excuse the double meaning) "hard" times....LOL!

What nabe is this? Jamaica?

FLUSHING as the story says and as is tagged. Sigh...

it didnt help that NYC did construction that closed off the drag for what seemed like almost half a year recently. I walk by this drag and OB's all the time. I see bars not whore houses -- or is buy a hoff draft and ask about the house special?

Do not blame the land lords. The real blame is the City Council and the Mayor as well as Albany. Look at property tax increases,water and sewer charges. All have skyrocketed. The landlords just passes it on. Soon the outer boroughs will look like Detroit.

Local government is taxing the middle class right out of New York. No one has money for the escalating rents and overhead. Middle class people don't qualify for government handouts. Only the illegals get everything for free. This is how Bloomberg wants it. Queens is for the poor people and immigrants and Manhattan is for all his rich cronies and tourists.

Queens Village/Bellaire (west of 212th street on Jamaica Avenue) looked like this 3 years ago-- maybe longer. Will never come back-- not as street level retail at least. With each passing decade, even in NYC, we shop at malls and big box.

let the land lords sit with no income , those greedy ass holes

But Claire insists it will revitalize Queens
The dump that already is and that she had a hand in creating.

No more Megan's hardware I guess...

I do blame the landlords.

One of the business owners on the street confided in me that if he didn't own his property, he would be priced out of business.

Go out and get yourself some street smarts....dummy.
You don't know shit from chocolate syrup!

They might appear to be bars by day, but "call girl" services are available in the wee hours of the morning.

It's pick up and deliver,
when it comes to the sex trade that's flourishing in the area.

No madam wants to get caught with whores doing their Johns on the premises.

Getting paid and laid to
let things go on as they are.

An example:
On weekend nights (mostly Saturday)
scantily clothed women can be seen being conveyed by limo from "OB's Cavem" to who knows where...a waiting client?

You are more ignorant than you sound fella.

But this was originally conceived of as a local street traffic retail shopping area during the 1900s-20s.

Everybody uses cars these days and the parking situation sucks.

An associate of mine wanted to open up a business here, but he actually got a better long term deal in Manhattan and is doing quite well.

The empty old Quartet theater
was renting for over $60,0000 a month!

Eckerd Drugs originally moved out because they couldn't afford that large a slice.

You've also got 2 (or 3) regular drunks hanging around the Broadway LIRR station.

Don't trip on their supermarket cart full of cans, bottles, belongings when using the underpass.

The nabe is definitely turning seedy.

It being Flushing and with so many high-rises going up, I'm betting that LL's are colluding to drive tenants out so they can sell the parcel of land for a mall, hotel, or mega-housing development.

Murray's Clothing on Northern Blvd. ( a full block) at 161 street was the first large space to sell to the Far Easteners. it was devastating to observe. i could always find a fit for the tall man.
at 162 st., Jackie Gleason's orchestra leader, Sammy Spears owned a club,about 1956. i think the name was "BLUE NOTE". Gleason would appear at times .
i believe the pub, "Netties" @ Depot/Northern was a popular local place for commuters to wind down after a day in the big apple.

and finally on Depot Rd.one could visit the W.J.Clinton ( once proud dem. club ,before hijacking by progressives) formed by prisoner B.Mc Glaughlin.

Queens COUNTY and 162 ST. sure has PROGRESSED WITH THE PROGRESSIVES IN CONTROL ?

FYI:
"L&L" does not own the property you speak of on Northern B'lvd.

Nobody will buy it for that price, and it will sit vacant for at least 3 years unless the rent gets lowered.

If someone wants to build there,
they can only go up 3 stories high with a setback.

I used to be on 162nd all the time. But now everything is run down and there is constantly a population of gang tattooed high-as-a-kite illegals standing around and trying to talk to me. No thanks. I'll shop elsewhere.