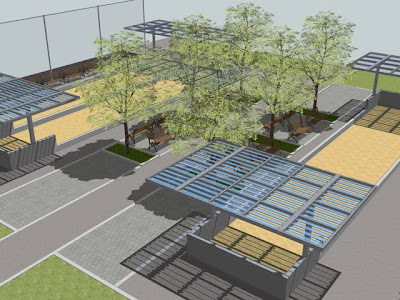 Bocce ball players in Middle Village will have more room to play soon, because the city Parks Department is planning on adding a new court to Juniper Valley Park.

The new court, revealed in a city request for proposals released Wednesday, is part of several bocce-related renovations for Juniper Valley park.

The renovations will cost $850,000 and will include the reconstruction of two existing courts in the park, along with shade structures, benches, game tables, lawns and trees.

The new court is a welcome addition to players in Middle Village, where bocce is hugely popular. Players say the current courts have several problems; including a slanted surface that prevents the court from draining rain water properly and the midday sun.

But the bigger problem, players say, is that the courts are too crowded.

Yep but no money for Little Bay

No money to acquire land in Whitestone.

Weren't these courts renovated not too long ago?
Bocce is a dying recreational sport
90 % of those playing at Juniper are in their 70s and 80s
What happens to these very expensive courts in 10 years or so when nobody will be using them???
Use the $ for something more lucrative. And long-term.

Some 12 years ago, they build a bocce court on Main Street, opposite NY Hospital Queens, at a cost of $300K, funds supplied by then Councilmember Harrison. No one used the court, weeds grew, and a few years later it was replaced by a mini children playground.

I agree how much longer till demograpics render this useless

Queens politicians never look long term. Look at the decrepit Worlds Fair site that has sat 50 years rusting and crumbling away. The old LIRR abandoned rail line is another blatant exMple of how our so-called leaders only think short term, exclusively for their own political benefit.

There's 1 bocce court in Astoria Park - down by Shore Boulevard, between the Triborough and Hell Gate. I haven't seen anyone EVER play bocce there.

Why does it cost so much to build these courts? Couldn't they find someone to do it for less? All these courts consist of is a little concrete and some sand.

Funny how Crowley can fund bocce $850 million for two bocce courts but can't find any money to save historic landmarks. She's a total loser.

Score one for the local "social club."

I guess they got envious of the shuffleboard players carousing in the shade at the top side of the park.

"Can you imagine in this day and age, prejudiced against Italians?"

I don't really know, looks like bocce
is a poor mans game. Why aren't these guys playing golf instead?

if the Italian and Serbo-Croatian bocce players are leaving us, maybe it is time to amend the 1965 Immigration & Naturalization Act (LBJ/TED KENNEDY) to allow more than 20% to migrate from Europe to the U.S. ,legally.

the present multi-cultural mix in Queens,(illegal & legal) has done it's damage already.