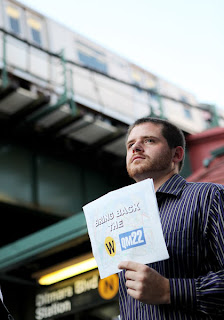 In light of recent public transportation restorations across the city, Astoria’s elected officials and civic members demanded Tuesday that the MTA bring back the W subway line and the QM22 express bus.

The request has been a common one for Astorians. Community members had protested the Metropolitan Transportation Authority’s budget cuts-inspired decision to get rid of the lines in 2010 as well as conducted petitions and more rallies to restore services after they were eliminated.

The MTA did not respond to requests for comment.

The W train ran from the Ditmars Boulevard subway stop at 31st Street in Astoria along the Broadway line and ended at the Whitehall Street stop in Lower Manhattan from 2004-10, and ran from Ditmars to Coney Island in Brooklyn from 2001-04. The QM22 ran from Jackson Heights to Midtown Manhattan, making stops in Astoria and Long Island City.

Why no mention of the Q train? That goes from Astoria to Coney Island.
Posted by Queens Crapper at 12:17 AM

A very interesting question, Crapper. One that Gianaris apparently doesn't know the answer to.

Q train is only temporary, and will become the Second Avenue Subway when the first phase is completed.

Because Astorians probably want three lines to run on their one track, with the Q serving as an express train from Ditmars, and the N/W going local.

And then the W will come back to replace it or another line will be routed there. There isn't going to be a service cut.

Three times as many trains at Lexington are already headed for the Ditmars spur rather than the heart of Queens along the R line which desperately needs more service.

In Astoria, the only time the politicians (and their puppet press) sees a 'need' for 'improvement' its to provide something to enhance development.

And they hide behind what the 'Astorians' want who, as a community, have no real independent voice in their affairs.

All aboard the Tony Bennett Express - next stop, Borough Hall!

Astorians can scream and demand all 'til their faces turn blue...
but all they will get is more shit
(over development, etc.)...
except where the Vallones live.

The W was a more convenient option for getting to the Wall Street area than transferring to the R.

What are these people thinking? The R is always more crowded that the N/Q. The R need the extra service.

Since you're talking about subways - I just recently have been taking the 7 train later at night (around 12 am) and it is like rush hour on there (no doubt mostly folks working low wage jobs getting off the night shift).

During the day, there are plenty of trains, but at night they seem to run only, like, every 15 or 20 minutes - why don't they run more trains?

They tried that on the 7 about ten years ago.

When I ride back to Manhattan after 1:00 AM the trains coming outward are crowded but mostly because people bunch in the middle and rear of the train that last effect stems from where people get on at Times Sq.

The problem is that when the W was cut, service on the N and Q was cut too. The trains run less frequently.

The Q is going to go to second avenue when that line opens, so they're going to have to bring back the W sooner or later.

I don't see seats open on either train during rush hour. Usually they are full one stop down the line, or by 30th ave. All the new hotels around 36th and 39th ave have added ridership.

I'm sure queens blvd. could use more service too, but cutting the W was a big blow to service in astoria.

The express bus ran too infrequently to be useful. I think it was 3 buses per morning. No one from central astoria used that bus, though the neighborhoods closest to LGA lost a good fast option...

There is the same amount of service on the Astoria line with the Q as there was with the W. Nothing was cut.

In the past when I would pick up the 7 train at Queensboro plaza later at night, I could count on getting a seat by taking the back car.

But just like in the past month or so, even the last car is jammed with people with barely room to stand - it's almost surreal.

Also - lots of Q trains now, even on the weeknights are stopping at 57 street in Manhattan and not going through to queens. I got REALLY messed up the other night when there were no notices posted and a Q train I took was running on the F line.