Astoria potholes to be repaired 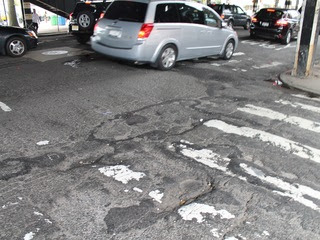 More that 30 potholes that marred 31st Street — the consequence of the harsh winter of 2011 — have become an annoyance and a safety hazard for both pedestrians crossing the street and drivers forced to maneuver around them, Councilman Peter F. Vallone Jr. said.

But after receiving multiple complaints from Astoria residents, Vallone asked the Department of Transportation to repave 31st Street between Ditmars Boulevard and 34th Avenue.

After fixing the portion between Ditmars and Astoria Boulevards last year, the DOT will now complete the remainder of 31st Street through 34th Avenue.

And in 6 months, it will need repaving again.
Posted by Queens Crapper at 12:23 AM

The company that is currently repaving the Major Deegan should get the contract.Haven't seen (or drove on) a road that well done in 35 years!!

Things like this happens when you double a community's population within a few decades ... and stick the bill on your stupid constituents who keep on reelecting your cause you can take care of a few 'problems' for them.

I have a solution: build a canal.