Is this really a good thing? 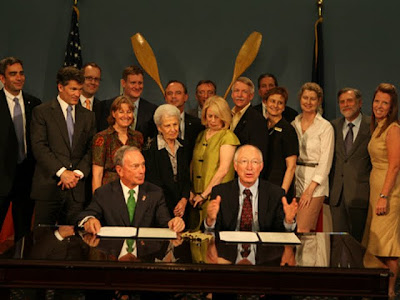 More camping sites, bike trails and enhanced boat access could be coming soon to Jamaica Bay Park, according to a new initiative signed between the city Parks Department and the National Park Service.

Under the agreement, which builds upon one signed in October last year, more than 10,000 acres of federal and city-owned park land will be merged into a “single seamless park,” said Interior Secretary, Ken Salazar.

The initiative will also help fund research that can continue to help preserve the area's fragile ecology, authorities said.

The park houses almost 300 species of birds, including some that are endangered, and has been under threat because of its proximity to JFK Airport and raw sewage discharge.

The land covered by the agreement is part of the 27,000 acre Gateway National Recreation Area.

A new “friends” group, similar to the ones in Central Park and Prospect Park, will also be formed to help plan and raise funds for the park, authorities added.

The public has also been invited to chip in with their ideas on how to make the Jamaica Bay Park better under the joint management.

Of course, because when one thinks of management excellence, the NYC Parks Dept comes to mind...
Posted by Queens Crapper at 12:43 AM

Queens Parks dept will find a way to ruin this ...

I have a developer next door for 2 years with broken sidewalk with falling down fence andbig hole dug and project stalled.

No one has funding for enforcement.

They take my taxes for boat launches and bike lanes for hipsters.

What's up with your page, when I visit your page two of the news videos start to play automatically.

Who will maintain this?

Mostly agree with you, but they may charge a fee to manage the property, which makes hiring additional help easier.