Fat Boy kidnapped; not coming back 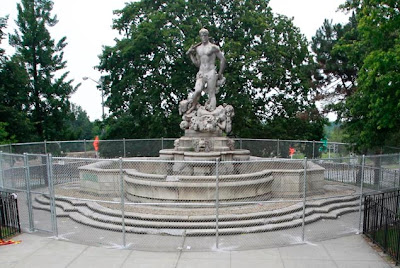 The city has hatched a secret plan to move a controversial, crumbling public statue out of Queens and into Green-Wood Cemetery in Brooklyn, the Daily News has learned.

The Triumph of Civic Virtue, which sits near Queens Borough Hall in Kew Gardens, has been both hailed as a priceless piece of public art worthy of restoration and derided as a sexist eyesore that should be trashed.

The city is mulling plans to replace the statue with a plaza dedicated to famous women from Queens.

Classic work of art to be replaced by a monument to tweeding. Only in Queens.
Posted by Queens Crapper at 6:48 AM

I told you so.

And the really neat thing is how everyone will stand at attention and cheer as they do in North Korea (if you don't they will cut your funding!)

The Hall of Lame.

History... while feminists in a fist of orgasmic outrage may point out the word breaks down into HIS-story, not HERS, "history" is the study of the past - subject to interpretation, of course. Making this status disappear (the cemetary?!) and replacing it with a monument to females is a stoopid idea... far more instructive to keep it and incorprate the latest take on appropriate in the plaza... creating a problem for future generations.

They might as well take a sledgehammer to it now and charge admission for the politically correct people to take a swing.

"Fat Boy kidnapped; not coming back"

But the fat ladies will keep on singing!!!

Well, by sending the statur to Greenwood Cemetary, at least they are acknowledging that Queens is now dead, and they and their ilk killed her!

Remember, women are equal to men, but they are very sensitive and we have to do what we can to protect them from what they might find offensive. They aren't strong enough to be able to just deal with reality. Oh, but they are strong and smart, and every bit the same as a man.

The writer of the News article spelled "Craigslist"wrong. Does anyone proofread anymore?

How about a statue of Ann Jawin while they're at it?

Helen Marshall has no money to restore the statue yet she has millions to build a "community performance center" in her name.
And she illegally cut down 12 healthy Japanese cherry trees to make way.
She is an insult to Queens and to our intelligence.
She will go down as being the worst BP ever!

Yeh. Move all of the beautiful art out of Queens and give it to the dead in Brooklyn.
What a shame.

A brilliant masterpiece, carved by the Italian American master sculptures, the Piccolini brothers. The statue is the second largest marble sculpture in the world. Only the statue of David is bigger. To state that the sculpture is sexist is ridiculous. On the day that the sculpture was unveiled at city hall, a lengthy explanation of the meaning of the artwork was provided by the woman who paid to have the masterpiece made. Its an outrage that such a masterpiece is used as an organizing tool by Queens progressives. The statue should be at the Smithsonian, so it can be restored and preserved for future generations.

Replace it with a bronze
of Moby Stavisky's fat ass!

Kill off Queens - strip it (sic) of anything worthwhile.

To add insult to injury, It was Anthony Wiener who first started the "Women are being denigrated by the meaning of this statue" campaign. Anthony Wiener was worried that this statue would offend women and while he was making this public claim he was sending pictures of his naked self to young women. You cant make this stuff up!!

This is an insult to the Italian-American community.

The word is that this is going to be the future location for the Queen Catherine statue.

Note that a decade ago they never allowed that Queens being named for her was a fiction, but only canceled the project cause an important tweeder group, the blacks, accused her of slavery.

Note that truth did not factor in their decision, but tweeder interests did.

Queens Historical Society, being the party organ, waffled the issue.

BTW, when opponents reached outside of Queens to try to get the broader historical community involved (read 'adults') to help those speaking the truth, they wisely ignored the issue and left Queens to its masters - who promptly beat everyone up - secure that no one will care or notice what happens in Queens.

Americans of Italian ancestry should band together and demand this sculptures restoration. Its an insult to our heritage to distort the meaning of this sculpture for evil political purposes.
The sculpture, with its historical significance, should be removed from Queens. It should be taken to a museum for restoration and display. The grand history of the great American master sculptures should be given. Its an outrage that our Italian ancestry is being denigrated and trampled by a bunch of progressive political operatives.
Shame on them, and shame on us for allowing it.
Let's get that sculpture out of their hands, and give it back to the American people.
Italian Americans should be enormously proud of their ancestors work. The Piccolini brothers were and are a credit to the Italian people.
They also carved the lions outside of the NYC library.

With Italians like Iannece, Gulluscio, Addabbo representing Queens, don't expect them to defend the honor of the Piccolini Brothers. They do what County tells them.

Oh, but they are strong and smart, and every bit the same as a man. Oh are you talking about Quinn? She looks so radiant as a newlywed husband.