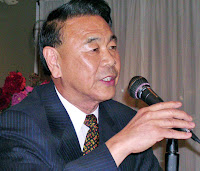 Jimmy Meng, a former Flushing state assemblyman and father of current Assemblywoman Grace Meng (D-Flushing), was arrested on charges of wire fraud in an FBI sting operation after he accepted a fruit basket containing $80,000 in bribery money Tuesday afternoon at his Flushing-based company, according to federal prosecutors.

In 2011, Meng told an unnamed acquaintance facing charges on state tax crimes that members of the Manhattan district attorney’s office could be influenced into doling out a lesser sentence with an $80,000 bribe, according to U.S. Attorney Loretta Lynch, who alleged that Meng offered to broker the deal.

But Meng never actually contacted anyone in the prosecutor’s office and instead led the acquaintance into believing the money could influence the case, Lynch said.

The unnamed person eventually went to the government and turned into a witness, wearing a wire since December to record ongoing discussions between him and Meng about the nature of the bribe, Lynch said.

The sting operation ended Tuesday afternoon, when the cooperating witness brought a fruit basket filled with $80,000 stuffed inside, on Meng’s instructions, to Queens Lumber, at 34-47 College Point Blvd., and federal agents arrested Meng.

Posted by Queens Crapper at 5:37 PM

Congresssman Halloran? Who'd a thunk it!

That's right. "Bury" that there Civic Virtue in a Brooklyn graveyard.

And this guy Meng was in the State Legislature? What is this guy stoopit? Er, ah, we know the answer to that. He expects to get 80G's. The CW then goes to the hoosegow and then doesn't squeal out somewhere along the line, "Hey I paid you guys 80G's!!!"...The lumber business must be bad.

The voters of Queens would never vote for someone unless they , or a family member had been arrested. It's part of the culture in that cesspool called Flushing.

Paying tribute via cash or favors is the Chinese way and the only way in China to be a success. It's done the same way here, it just that you don't see it or know it if your not Chinese.

Banks for the memories...

Meng indicted? Here we go again
It's just disGRACEful!,,
Vote them all out you Queens voting idiots!

I recall the first time i met Grace , we stated chatting over coffe, we exchanged backrounds, she told me about pops...law school and some other crap, but whats funny is she said if she runs for his office she dose not want his help and no way will be like him...true!

The Meng dynasty shall crumble...

I received a Grace flier during the recent campaign, praising her dad for waiting on restaurant tables to support the family...

What goes around, comes around. He'll be waiting on tables again and you know where.

Huang, Liu, Meng....
what else have the Taiwanese contributed?

"Mr. M", a very big time lawyer (who shall remain nameless) once described Flushing's Chinese as,
"a lying people from a corrupt society".

He also noted that Donald Manes
did "business" with Tommy Huang.

RU following all this, you eager beaver FBI guys and gals?

Finish the job by following the money trail to its very end...GARY ACKERMAN!

It all began with ACKERMAN!

In the mean time, stay tuned to Queens Crap for more tips.

For years on this distinguished and perceptive blog site, Queens Crap, readers' voices have been crying out in the wilderness, "Bring in the Feds!"

The cavalry has finally arrived?

Great day today, Meng and co. are finally getting what they deserve.We hope they confiscated his passport.

He(Meng) states that" I haven't done anything wrong" Really?! Does he think he is so important that he is being set up, that it's all a conspiracy just because Grace is running for congress. Hey jimmy,grace maybe it's a Masonic conspiracy;hehe.

Think back to the year 2009. Who did you cross?Who did you befriend and then deceive? You welcomed him at your Democratic club of flushing at the Queens crossing building.But that was all ruse wasn't it. Someone who never met you until they attempted a well intentioned run from the Hill. Remember that guy? He remembered you.

Mess with the Bull
You get the Horns

Once a Meng, alwYs a Meng.

Grace is still gonna go to Washington. In our borough, the only folks who vote are County regulars.

From Huang to Meng...
these corrupt Taiwanese have proven to be a treacherous crew!

If you want real reform in Flushing...begin by flushing out those fat lazy asses from CB#7.

BTW...
Marylin Bitterman's salary was just raised from $85 grand and supplemented with a portion of 2 retiring staffers' pay.

We wonder if she still gets "advice" from Wellington Chen?