Chronicling the US Open invasion 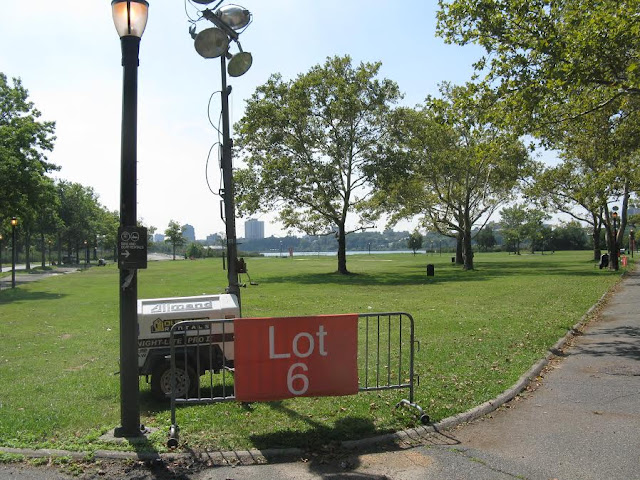 "Hi Crappie, I was in Flushing Meadow Park and took these photos of all the parking lots that are marked for the US Open.Of the 6 parking areas all are on grass except 4a and 4b which have paved over many years ago for parking.

The electronic sign is directing cars to Citi Field for parking. The two adjacent parking lots by the Queens Museum are used for all the emergency vehicles and there are more police vehicles all throughout the park as every car the enters the park must be inspected at various check points. 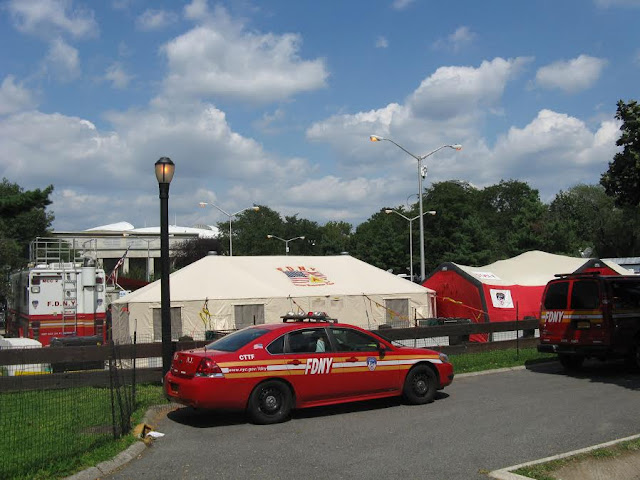 Remember the lie put forth by the Wilpon's and Related developers that Citi Field parking lot is not needed? This week on top of hosting the US Open there was two days of concerts by Lady Ga Ga.There was a traffic nightmare and I saw cars going all through the park on the various roads not just the outer roadways and none are well marked and are dangerous to cars,bikes and pedestrians alike. 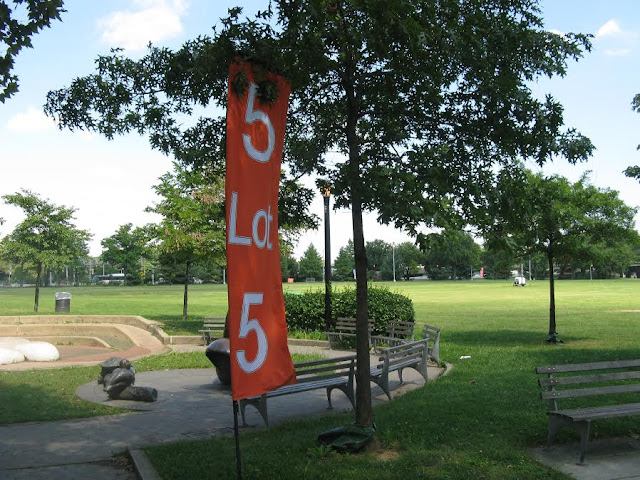 Yes there are plenty of parking areas in the park and surrounding areas but Citi Field lot is well used too and needed.Add a mall with stores, restaurants, movie theaters on top of the Met's, US Open and large events and concerts is a recipe for disaster and not what a park should be.

The Mayor and our city council wanted a mall so I guess their plan is to use our park as a parking lot for all the stadiums they want to build. 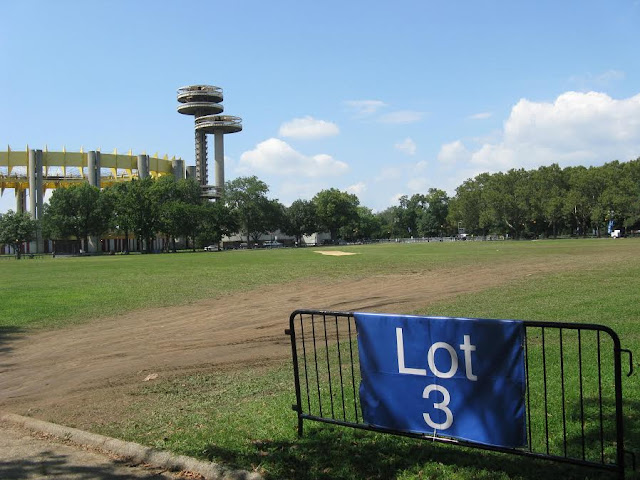 I sure hope the city is making lots of money from the US Open because one can only imagine what it is costing us with all the police,firefighters and other assorted first responders involved each day.I know one thing the money isn't going back into the maintaining the park.I bike from the Promenade along Flushing Bay to around the lake all the time and I see roads not marked and in bad shape, I see homeless camped out on the rocks of the bay, I see lots of garbage washed up on the shore.Yes for the Open they plant lots of flowers and it looks pretty for the people going in but with all the millions of dollars from baseball,tennis and concerts you would think we would have a world class park up there with Central and Prospect Park. 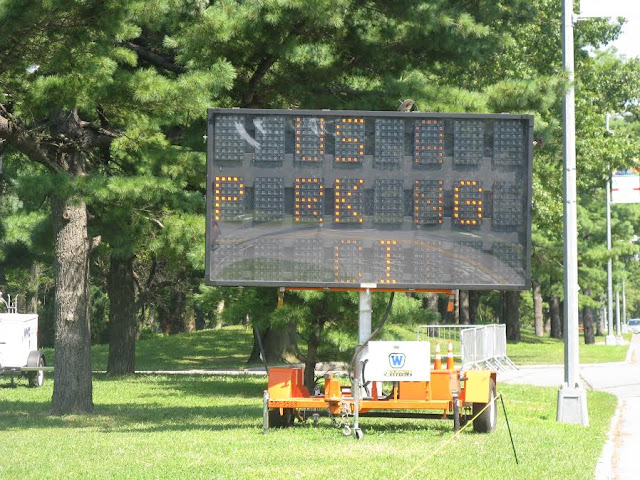 I've been trying for 12 years just to get the city to put in a crosswalk for pedestrians walking and biking to the Marina and they have done nothing.They spend millions on building a promenade not realizing the people are going to want to get to it and this is a very busy road with trailer trucks whizzing by. For years I wrote the Park's Dept. and they said there was no funds available and there is a Master Plan and these things take time. This year I contacted Councilwoman Ferraras's office and they contacted DOT to do a traffic study. 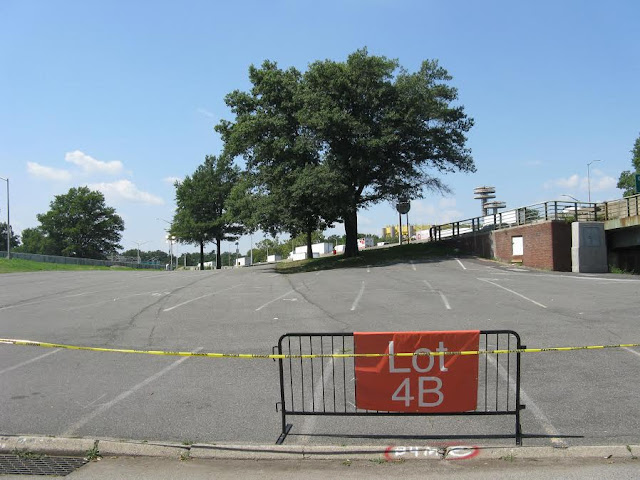 The city is so concerned about putting bike lanes everywhere how about in Flushing Meadow after all it is a park and there is even a bike rental concession .Biking around the park there are no bike lanes or signs informing drivers to share the road and many of these roads drivers treat as extensions of the highway's that surround the park. 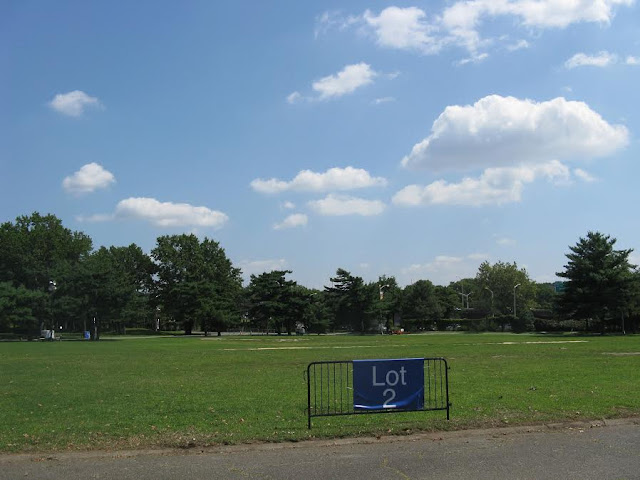 The future of the park looks grim, when you think that the Mayor ,the City Council and the Boro President all were in favor of the shopping mall and it was only a small group that opposed the plan that got it stopped for now.Remember the Formula 1 race track that was to race around the lake or the many stadiums that have been proposed?It will only be a matter of time when a plan will come along that can't be refused and the people will be too complacent to care." - Richard

Thank you Richard your concerns about the use of the park are right on.
I tried to go to the Queens Museum and was told it will be closed for two weeks because of the U.S. Open and I find that outrageous !

Looking at this, Joni Mitchell's Big Yellow Taxi comes to mind. Even if it's for a few weeks.

The park will always be maintained to the level that is needed to support huge moneymaking enterprises-- the largest of which is the USTA-- which is never going elsewhere. Why would it?

Parking on the grass was used during the entire construction of the new Citi Field Stadium.

This method of parking cars on verdant fields is used throughout the entire world.

Suddenly we are advocating for vast swaths of concrete.

I'm concerned about Francisco Moya, who in the past supported a soccer stadium in FMCP.

Let's keep in mind the infamous Mayor Dinkins, who signed the contract on his last day in office, giving FMCP land to the USTA for 99 years. There is even a clause that if LGA planes fly over the USTA stadiums during the games, NYC has to pay a fine to the USTA. Dinkins was named a Board member of the USTA.

all they need are more bike racks

This is my local park. It's where i go to exercise, run and on occasion catch a free event. During the US Open it is a completely different place, a 'Fort' if you will. All the law enforcement resources from throughout Queens converge and make FMCP their home for the duration of the event. Good for the tourists but bad for the residents of Corona & Flushing. i would like to see a command unit on my block to deter the drug dealers and gangs that still plague my neighborhood but because we are residents and don't bring in tourist dollars to the city they just don't give a rat's ass. Our political leaders, Julissa Ferreras-Copeland , Francisco Moya, Jose Peralta have done absolutely nothing to make our community safer except for pushing for 'sanctuary status' for the city which was a calculated political move on their part. SHAME ON THEM !!

And here I thought that everyone who goes to Citi Field for Mets games parks under the elevated portion of Northern Blvd, near College Point Blvd - there are always cars parking on the concrete islands under the roadway.

This simply drives home the fact that the Queens Democratic Party owns Queens and everything in it and that ownership is for the benefit of that party.

and watching the farce the Vallones are making in the sacred ritual of an American election,

or the anti-fa thumbing their nose on American history (like that Columbus) statue,

or the brainwashing of children and faith with transgender issues,

people like DeBlasio, Jimmy Van Bramber, Croonin' Melinda Batz and Honest Joe Crowley (who raises his family safely away from the riff-raff (in his eyes) that elect him)

are all heedless that times they are a changin'.

Bob Dillon is right. The much delayed revolution from the 60s are upon us.

The 3 flag poles on Shea road still fly no flags nor are light poles working. Portable diesel lighting.......breathe in those fumes tennis fans!

The U.S. Open means it's open season on nearby residents. The park is somewhat privatized until the games are over. More airplane noise over our homes. Congested highways, etc.
Do any of the tennis fans spend money in downtown Flushing? Certainly not! Who can blame them? A jump into the downtown sewer is not to the liking of the snootily tennis crowd. Flushing stinks! It's streets are overcrowded and dirty. No.....it's back to Port Washington, Manhattan, Connecticut. Peter Koo take note. Get up off your fat crooked ass and clean up your act as well as third world Flooshing!
Beijing is much cleaner!

First it was the Asian invasion, now it's love set match invaders!

Great post, great pictures. This is what the news, print and televised, should be. Take note, Sinclair and "Tronc"

well this park has degenerated into a place of open container drinking, rape, assault, and dope smoking...it jumped the shark a long time ago

Remember the comments that ballplayer made a few years back? That is pretty much the feeling of mid America for the 7 Train.

So why has this group hijacked our borough this week?

Get a grip people! Jesus.

Then post it in their backyard or your backyard.

We don't really care except dealing with the annoyance.

Have no fear the Flushing Meadow Corona Park Conservancy will fix it.

'Flushing Phantom' I could not agree more !!

Go for it retardo.
Host it in YOUR BACKYARD.

FUCK THE USTA. GO BUILD YOUR STADIUMS IN JERSEY !!

Should we get rid of the baseball teams too?

>>We don't really care except dealing with the annoyance.

Why isn't TransAlt demanding bike lanes from NYC and Long Island direct to the USTA and CitiField events? Hypocrites.

I demand bike lanes from NYC and Long Island direct to the USTA and CitiField events.

>>Why isn't TransAlt demanding bike lanes from NYC and Long Island direct to the USTA and CitiField events? Hypocrites.

Sounds more like the latest special snowflake gender choice than the serious organization it is.

As an avid bicyclist I joined Transportation Alternatives when they first started and was a member for a few years but quit after they refused to print any letters or answer anything critical of the behavior of cyclist.