Amazon looking for space and Sunnyside Yards is in the running 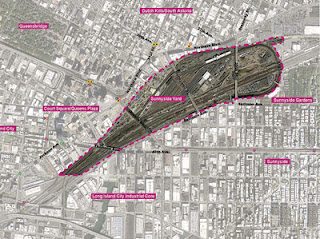 Amazon has announced that it is looking for a location to develop its second headquarters—which would be known as Amazon HQ2—and Sunnyside Yard is among the spots it is eyeing.

Earlier this year, the city’s Economic Development Corporation (EDC) released its $2.5 million Sunnyside Yard feasibility study, which evaluated the viability of decking over active rail and facilities currently at the site to make way for housing units, retail space, parks and schools. Sunnyside Yard—which currently serves as a storage hub for Amtrak, the New Jersey Transit and Long Island Rail Road—sits on approximately 180 acres of land in western Queens.

Grant Long, a senior economist at Street Easy, an online real estate organization, spoke to the Queens Tribune to discuss the possibility of Amazon HQ2’s being built above Sunnyside Yard.

“Sunnyside Yard is the best fit,” said Long. “Through this project, people within the community can get good jobs.”

Amazon HQ2, which would seek up to eight million square feet of commercial space, is expected to create 50,000 high-paying jobs that offer an average salary of more than $100,000.

Long said that these salaries would enable workers at the new headquarters to afford apartments or condos at the numerous buildings constructed in Court Square, Downtown Brooklyn, DUMBO, Williamsburg and Long Island City.
Posted by Queens Crapper at 12:54 AM

So they will pay enough to afford a $3,500 studio shared by two people ?

I think this is wonderful news for LIC, Queens and NYC. Will create a lot of jobs for a lot of people, and the location has unique access to different subway lines and the LIRR, and right next to the heart on Manhattan. I can image a beautiful Amazon headquarter there, with public and cultural event spaces. I hope this happens.

@georgetheatheist, expected median salary for AmazonH2 is over $100K. Do you really want more low wage Walmart stockpeople cramming into Queens, or singles/DINKs living in those new West Side condos and families buying in Nassau?

Amazon is a job and business killing entity. For the past few years as all those luxury towers went up, the tower people never leave their abodes and do their shopping on their stupid apps and it's led to thousands of stores shutting down and department stores cutting staff and nearing bankruptcy.

I have seen the way Amazon is shipping deliveries now, they hire these contractors who use rental trucks and park them on street corners and set up the parcels on the sidewalk, obstructing pedestrian traffic and small business storefronts. It brings to mind when the mafia used to steal trucks and sell the merchandise on the street.

Now with Cuomo giving them excelsior welfare tax abatements for millions and this stupid idea, they are going to further destroy the fabric and economy of this city.

Funny how they rejected Wal-mart and not this heinous, life and privacy invading corporation. Maybe it's because de Faustio shares his neoliberal values with Bezos and the Wilson Family, though they are avaricious ghouls, lean ultra-conservative. Of course there is the deranged obsession and admiration with all things tech.

Kill this proposal. Besides, whatever jobs will be offered they will be replaced by automatons.

"Amazon HQ2, which would seek up to eight million square feet of commercial space, is expected to create 50,000 high-paying jobs that offer an average salary of more than $100,000."

Believe it when you see it.

I would think that the cost of shipping products IN AND OUT OF the area would be too high to make Sunnyside a consideration.

The EDC only has a plan to DECK over the yard - the city has NO PLANS to add any new transit routes, bus routes, electric feeder cables, subway stations, sewage lines, etc.

This is going to end up being a multi-billion dollar boondoggle for the entire city with taxpayers left holding the bag.

One point of clarification- This is not a distribution center, it is a proposed second campus/office space, primarily for their business people and engineers. Many cities around the country are pitching themselves, and throwing lavish tax breaks, at Amazon trying to attract them. https://en.wikipedia.org/wiki/Amazon_HQ2

What is wrong with you people?
Why would Amazon ship products from their headquarters?
This is one of the most successful companies. NYC should go for it.

>> JQ Funny how they rejected Wal-mart and not this heinous, life and privacy invading corporation. Maybe it's because de Faustio shar

Not a headquarters but a store presence. The unions and their NYC council flunkies said no to Walmart in any of the 5 "burros".

"I think this is wonderful news for LIC, Queens and NYC. Will create a lot of jobs for a lot of people, and the location has unique access to different subway lines and the LIRR, and right next to the heart on Manhattan. I can image a beautiful Amazon headquarter there, with public and cultural event spaces. I hope this happens."

Do you think the ink is dry from the Amazon office printer yet?

Amazon CEO stated that minorities makes higher salaries than whites.
Isn't that statement and the idea that some people are paid higher wages than others a violation of EOE labor laws and the ANTI-discrimination law ?

The day I heard that statement I decided I would never but from Amazon again - and I haven't.

"This is one of the most successful companies. NYC should go for it."

Look up the word 'am-hole'.

That's not the type of person we need living in Queens.

ok well I will moderate my comment... I bet some local councilmembers and other elected are salivating at the prospect of this...Van Bramer, Katz, Gianaris, Crowley (Both Liz and Virginia Joe)....If this deal goes down, they will be tripping over each other to A) Take the credit and

B) be the most prominent at the ribbon cutting ceremony (photo ops anyone?) I used to like Amazon but now see them for that they are...a behemoth that is hell bent on taking over every possible sector of the commercial sector (I mean you can order cans of soup from them for god's sake) they are putting department stores out of business, they treat their employees like dirt, Jeff Bezos is a greedy, soulless troglodyte who relies on grunts and bad labor practices to keep his business profitable. He is an insufferable, ungrateful a-hole. Why people still champion Amazon is beyond me. They seem to be an almost criminally bad company.

But hey, they will fit right in with the criminally bad Queens Democratic Party Organization (aka The Machine, or County). As any reader of this blog and resident of this borough knows by now, we are represented at best by mediocrity, at worst by downright criminality and deceit. Some say we get the government and society we deserve. I don't know about that.

Most people I know are just trying to keep their heads above water, build a decent life for the family, and are working their butts off. Small business owners are really taking it up the you know what right now, really struggling. Then we have this influx of all these self important genius creative class hipster millennial type whatever you want to call them from flyover states who move here and move into boroughs like Queens, take over the neighborhood, drive commercial rents up so they can have Beyoncé yoga classes and farm to table egg white omelets and organic beard oil, meanwhile the coffee shop that has been open for 50 years has to close down because the rent has been raised and they can't afford it anymore. Yeah, progress. The BS is starting to pile up so high, we're going to need wings to stay above it (or drones if we want to fit in). Ok that's my rant. Sorry if it's long

This is one of the most successful companies. NYC should go for it.


Wonder why. Like not paying taxes, boss is CIA connected, WaPo is the Company newspaper, always has been, selling cheap shit chinese garbage.

So you are right, they are very successful by all means, fucking people over and mostly mom and pop stores, that cannot compete with this type of shit.

Do you want your kids to finish graduated and be able to get a job? Then you need companies like this.

I can't find this anywhere. What is the source?
>>Amazon CEO stated that minorities makes higher salaries than whites.


They sell many products including groceries.
Are you suggesting companies should sell everything but Chinese products?
What is your argument?
>>selling cheap shit chinese garbage.

They pay taxes. Many internet companies did not pay sales taxes to states.
Amazon does now.
>>Like not paying taxes

Amazon does not own WaPo. Jeff does.
>>WaPo is the Company newspaper

Mom and Pop Will Die said...


They created a business model that was better. Do you also blame Apple for hurting the Commore 64. Do you cry at night for all the Commodore 64 engineers that lost their jobs?

>>fucking people over and mostly mom and pop stores, that cannot compete with this type of shit.

2007: Walmart is driving department stores out of business! They must be stopped!

2017: Amazon is driving Walmart out of business! They must be stopped!

Amazon hires 1000 MBAs a year and slated to hire 50,000 new software developers plus they have a secret deliver service to compete with FedEx on deck do roll out nationwide in the next few years.

This company has jobs.

Put Amazon in the Southeast section of Queens. There is 15 acres of land (Former Elmhurst Diary Plant) just waiting to be used. Plenty of transportation (subway, LIRR, buses) and people in that area need the opportunity to work.