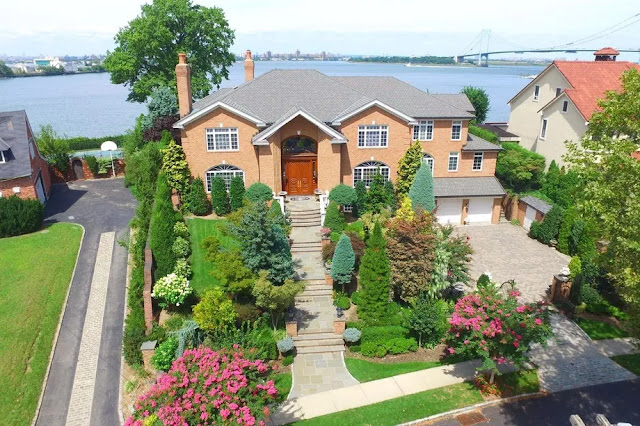 It should come as no surprise that the most expensive home for sale in Queens right now—according to StreetEasy, at least—is in the tony enclave of Malba, situated at the foot of the Bronx-Whitestone Bridge on the East River waterfront. (One ambitious broker once described’ the neighborhood as “the Hamptons of Queens,” which, sure.)

It should also come as no surprise that the house—listed with Ryan Serhant, and asking a whopping $8.795 million—is an enormous single-family property (with McMansiony qualities) built in the 1990s, as is typical of homes in this price range in this particular part of town.

The 12,000-square-foot space—16,000, if you take its full lot into account—comes with seven bedrooms, nine bathrooms, a seven-car driveway (and a three-car garage), two family rooms, a temperature-controlled wine cellar, a wood-fired oven in its second kitchen, an outdoor kitchen, and a 40-foot in-ground pool, and really, that’s just scratching the surface.
Posted by Queens Crapper at 7:26 AM

Good for the owner. Looks like a nice property that was significantly improved over the years all within NYC's building codes.

DeLousio is going to ruin this neighborhood too.
Can't wait to see the value plummet in this part of Queens when the prison in College Point is up and running. Enjoy it while you can.

Looks like a political DemonRat, I mean democratic compound for the Crowley-Rivera-Pfeffer/Amato-Vallonia-Weprin 'Hack' dynasties of Queens/Bronx Counties, and their respective chapters in LEGALLY organized corruption, graft——and an endless loop of openly practiced crime sprees of 'NAKED GREED,' dutifully presided over by the King of Albany corruption HIMSELF: 'Gargoyle Andy Cuomo' (the greatest politically failed dynasty in New York State, of them all)!

Or, maybe it's the New York based headquarters of the foreign based Genting, Malaysian casino crud/gambling mobsters, all of whom have already destroyed the former Aqueduct racetrack to obliterating effect, by transforming it (overnight!), into a virtual ghetto of 'underclass' peasant-like gamblers who can't afford to gamble their penniless futures away in the first place (and leaving southeastern Queens looking like 'The Fourth World' of societal collapse——currently in mid-level progress)!

❝Politicians are the entertainment division of the military-industrial complex.❞ ——Frank Zappa

Junk, You really are a hater. Go make more money and you soon can have the same.

I am Elmer J. Fudd, millionaire. I own a mansion and a yacht!!!

That's no mansion, that CHEAP slap up pre-fab computer design garbage.
8 foot denominations and all the same angle cuts designed to use every piece from the scrap pile are dead giveaways.
Must have cost $200K to build that box
Love the stock made in China plastic Home Depot windows and bowling pin walkway that will be turning green with moss, failing and literally disintegrating in 5 years. These CAD slap ups also drafty and cost a fortune to heat.
My niece can build better looking with legos, -she's 12

Junk, You really are a hater. Go make more money and you soon can have the same.

Asshole, I have all the money I need in the world. Is till junk. No taste.
and at the end of the day the house owns you.

What a cheap-looking, butt-ugly McMansion. There WERE some gems in that neighborhood but the low-class gangsters have ruined them. I hope this POS is featured on mcmansionhell.com!


Shitty, shitty McMansinon crap. That said, the landscaping is decent.

Its really amazing to me what Queens considers "nice"

HAHAHA, they couldnt even be bothered to get the doorway centered in the under the peak of the roof!

One good hurricane surge and that man made mountain of landscaping and 2 retaining walls are coming down into the street. Will likely take half the house foundation with it.
Its called "liquification" --What they did to build that box higher over the other homes is very dangerous and unstable when saturated with water!!
Liquification and compromise of that flimsy retaining wall could bury and kill the people next door in seconds.

How the hell could such plans pass approval, I wonder what the $$ payola was and who was involved. Is this Vallones district ?

Its really amazing to me what Queens considers "nice"


hahaha, you don't expect the commie snwoflakes to have taste do you?
Ugly piece of crap, overpriced piece of crap so idiot owner can pay $250K in 10 years in taxes. And we suppose to be jealous and envy the "success"

Wait Till DeBlasio puts a homeless shelter right next door to it. Watch the value go down.

It could happen anywhere.
A woman and a man from department of human services was snooping around the block, then came up to me at the house on Seneca when I was placing a ladder through a window. They were looking, then asking to rent. They had badges. When I responded with "no renting" the woman asked why ?
I told her once a tenant establishes residence starts getting mail they stop paying the rent or causing problems as an excuse not to pay the rent. Renters and illegals are receiving FAR to many protections under deBlasio. Renters get every dam break and 10th "last chance" in the book in housing court. One cant get them out when they become assholes, or a worse some pregnant female with kids, and its the landlords who get called "heartless" "racist" "selfish" and treated like a criminal. She responded with this sales pitch that would guarantee me rent money if I joined this new program (a contract) and none of my neighbor's would have to know about it.
I responded with: "Oh yeah as in take in homeless, Illegals and every other deplorable nuisance piece of shit parachuting into this city on the taxpayer dole right?" As the woman gasped I told them "NO FRIGGAN WAY to go F_ yourselves" get off my steps and slammed the door. I then called 911 and was patched to the 104, They responded with "yea we received some calls they are working that area today and are legit"
--So some kind of sneaky new STEALTH shit from the deBlasio administration is going around !!

Check out the Byzantine palaces on Samos Lane down the street from this, they initially wanted five million before the crash then sold for a fraction

Do these people have the right to come in your property and ask about renting??? After having a three family and having issues with this crap that you have renters I just sold it and moved into a one family. Why deal with that crap. Is the money really worth all that headaches you have renting out apartments?

Do these people have the right to come in your property and ask about renting???

From what I understand from my lawyer If you do not have a no trespassing or peddling automatic -YES.
A contract with public services such as gas, electric or phone company is also a -YES
A government official on official business including to serve a warrant or summons also -YES
A charity organization -YES
The police -YES

Your steps, stoop, mail slot, doorbell but not beyond or inside pertains to all of the above unless the police believe its a life or death emergency.
Pages of other things apply to but these the common ones.

All the nonsense these anonymous people are commenting on are full of crap. You people are jealous and just don't want to admit it. Excuses, discount bricks,cheap looking. Wow. Instead of being happy for the person who lives there you have something to say.
You just wish you had a house like this. Lame a$# miserable people. You also say that you have all the money you need, please. Show a pic of your dwelling, no where near this house.

"no where near this house"
--------------------------------
I'll put my name. And what house ? All I see is an out of place computer designed big gory box made from a bunch of stock material delivered on a trailer with not one foot craftsmanship or skills to do. Somebody's sick vision of so called "class"
Friggan hell, Not even a front door with a hand painted gold address on glass above it ?
My 97 year old house on Seneca ave, original hand pounded wrought iron work front gate, andiron posts & globs and back yard is better !! --No bling, plastic windows, bowling pin's or eurofucco-facing neither. All hand restoration, no Home Depot shit on my house (houses) I even mill my own router bits to re-create molding.

That McMansion is not class, its a friggan joke just like the cheap re-production furniture in it.

To EDnED: Stop barking already, you chihuahua! Why is it that no one can face facts without attacking and shooting the messenger?

The house is made of camel dung, so get over it! And, I am one of those respondents who has all the money that is needed, as the owner of not one, not two, but THREE homes: One in Queens County, another in Sag Harbor (on the water), and a third in Bucks County, Pennsylvania!

So I think that, as an architect I qualify to weigh in on a cheap crap facade when I see it. But, if you like this 'hideosity' so much, then why don't YOU open up your OWN cobwebby wallet and make an offer, and, then you too can watch your dream McMansion decay faster than your purse string's content!

To EDnED: Stop barking already, you chihuahua! Why is it that no one can face facts without attacking and shooting the messenger?

The house is made of camel dung, so get over it! And, I am one of those respondents who has all the money that is needed, as the owner of not one, not two, but THREE homes: One in Queens County, another in Sag Harbor (on the water), and a third in Bucks County, Pennsylvania!

So I think that, as an architect I qualify to weigh in on a cheap crap facade when I see it. But, if you like this 'hideosity' so much, then why don't YOU open up your OWN cobwebby wallet and make an offer, and, then you too can watch your dream McMansion decay faster than your purse string's content!

Ok,buddy with your three homes but spending his time on a forum. Who gives a rats a#$ if the house is made of camel dung. Don't look at the house, my point is people are freaking miserable and always have something to complain about. How do you know if the owner prefers the home the way it is, people need a life and stop worrying about the next mans situation.