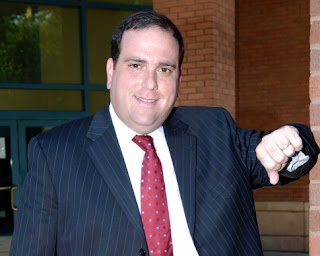 The Queens native was first elected to state office in 2011, representing a wide area in the center of his home borough — including his old neighborhood of Forest Hills.

He had previously served for 15 years as chief of staff for Assemblywoman Nettie Mayersohn, and worked for the city Housing Preservation and Development department prior to that job.

Simanowitz was eulogized in The Yeshiva World as “a tremendous voice for the Jewish community,” and Gov. Cuomo issued a statement hailing his colleague.

The Democratic assemblyman “worked every day to make life better for his constituents and I join them and all New Yorkers in mourning his sudden passing,” said Cuomo.
Posted by Queens Crapper at 6:55 AM

So, nearly 20 years of purported public service (i.e., assembly member, lackey for Nettie Mayersohn, as well as the Housing Preservation and Development racket), and not a single day spent in private industry——you know, where everyone else HAS TO WORK for their corporate wage slavery!

Funny, how the ones who claim to know so much about the people whom they purportedly represent, are the SAME ones who've never stepped foot into a union shop, much less a job in private industry that demands actual job ACCOUNTABILITY.

And, why, Governor Cuomo (the greatest party-machine-failed hack of them all!), was his voice only 'tremendous' for the Jewish community, and not for ALL of his constituency? Why make this about religion when it's SUPPOSED to be about honest, ethical, inclusionary, NOT FOR SALE, POLITICAL leadership, that leads by example (please, Queens Crappers, stop laughing now)?

No wonder I've never heard of him——just another damaged product of the pay-to-play, sycophantic, Albany DemonRat, party-machine-failed system that has already (and long ago) destroyed Queens County altogether——and, in ways that are even worse than nuclear proliferation——and, 100 trillion times more lethal to all pretense of ACTUAL democracy——and, the public be damned (again and STILL).

All farcical, as these party-machine hacks are all for themselves. One light bulb dies——another handpicked, DemonRat hack to replace a bulb that wasn't too bright to begin with (and replaced by a bulb of less output, no less)!

This is Forest Hills where only Jewish pols get elected.