Vallone "community letter" turns out to be political ad 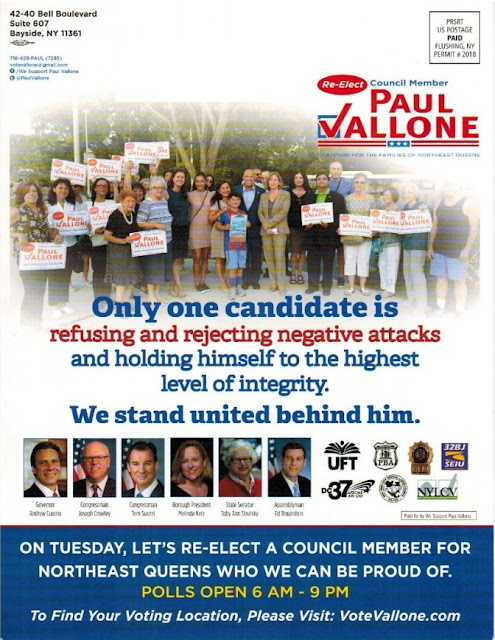 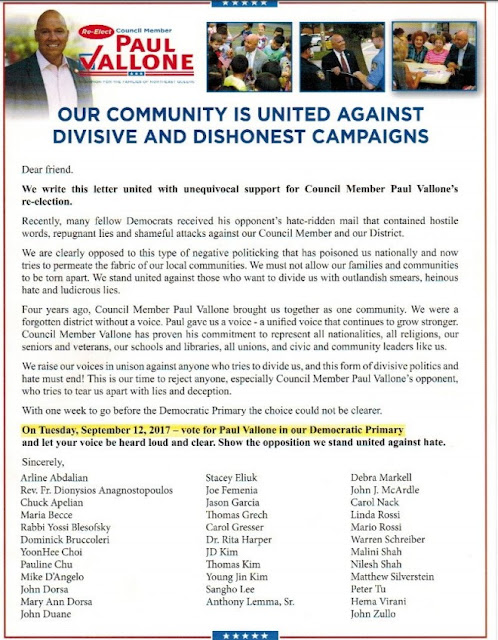 I read "Paul vs. Paul getting really amusing" a few days ago and couldn't believe how hypocritical these so-called "community leaders" who support Vallone were in condemning the mailers from Paul Graziano...I remember what happened four years ago with Vallone's mail pieces - they were nasty and people got really turned off, and none of those people said a peep when it happened, but whatever, they want to say their piece now, so be it.

So imagine my surprise when I got a mailer on Saturday with the letter on one side and all of these elected officials on the other. What a crock! That letter was phony - Paid for by We Support Paul Vallone! Classic Queens Democratic Machine BS."

So he tricked newspapers into printing a free campaign ad?
That's pretty lame.
Posted by Queens Crapper at 12:12 AM

All you get from Vallone .... lies

Those vallones sure are tricky.

It should also be pointed out that all the self righteous individuals who four years ago condemned attack ads, are now conspicuous by their silence. Hypocrisy reigns supreme!

Better to say, "Vote GRAZIANO!" Those who support him should help get the vote out. Good Luck, Graziano!!

Since we already know that Vallone's supporters engaged in fraud and forgery in collecting signatures for his petitions, I would check with everyone whose name is listed on the Vallone letter to make sure that they actually signed it. Fool me once...

So Vallone has to resort to more lies and drama. Why can't he just say what if anything he did? He touts all that money but he fails to acknowledge that every councilperson received the same amount of money. What a fool.

Don't be a fool, vote for GRAZIANO.

it shows how the machine has destroyed all the institutions in Queens. - this man has contempt for the process and now a newspaper has elected to destroy its credibility.

i see no difference between queens press and brietbart media.

Can I vote for Graziano?

>Since we already know that Vallone's supporters engaged in fraud and forgery in collecting signatures for his petitions, I would check with everyone whose name is listed on the Vallone letter to make sure that they actually signed it. Fool me once...

Wadda you want Walyo?
These Queens weekly rags cannot differentiate fact from fiction. Political fake news is what they have just swallowed. No Pulitzer Prize for you! Shows you just how crooked Paul Vallpne and his Mafiosi family are. DISGRAZIATTTO!

I see BFHAs Maria Becce's name is on it!
Gag! I thought that not for profit organization members ARE NOT allowed to endorse ANY political candidate. What's the explanation here?

Anon #13:
Not-for-profit organization members may endorse candidates, so long as they don't endorse in the name of the organization.

I see BFHAs Maria Becce's name is on it!
Gag! I thought that not for profit organization members ARE NOT allowed to endorse ANY political candidate. What's the explanation here?

I think it only would have been an issue if she had put her organizational affiliation next to her name. But, nonetheless, she destroyed her credibility (if she had any).

Splitting hairs if she didn't put her orgaization's name beside her name. This lady is a Vallone advocate. Nothing wrong with that in itself but Vallone is against practically everything that neighborhoods in the northeast desire. They desire good quality of life without overdevelopment. Vallone represents rapacious over developers. In fact his main job is being a developers' lobbyist.He merely moonlights as a councilman. It appears that The lady in question might be clueless as to the damage Vallone has done to the district. She should consider stepping down for the longer term good of BFHA.

Garden judging tea and crumpets and bronze recognition plaques do not protect a neighborhood from law breakers and speculative developers.
Church socials and mothers club luncheons are passé. Those skills don't cut the mustard in the serious work needed in civic orgaizations.

Can I vote for Graziano?

--- Today, Sept 12, is voting in party primary; can only vote in a party primary if you are registered in that party --

Im a registered Republican.
Can I vote for Graziano?


Nah, you are a registered idiot or a registered troublemaker.
Vote for your boss VALLONE, like you guys always do, at least 10 times.

Well at least Lionel knows he can pay his food bills for the next four years, fat piece of crap

I vote Republican all my life and they would not allow me to vote for Graziano, These communist crooks say I must become a democrat. Why nobody say anything about this political bullshit months ago. I am a plumber not a politician.

I vote Republican....
Come November all the Republicans, Democrats and Independants can vote for Graziano.

Graziano will unify the entire NE Queens and tackle overdevelopment, fight for a real estate tax cap and keep Riker's open and jails out of our communities. Vote Graziano in November!