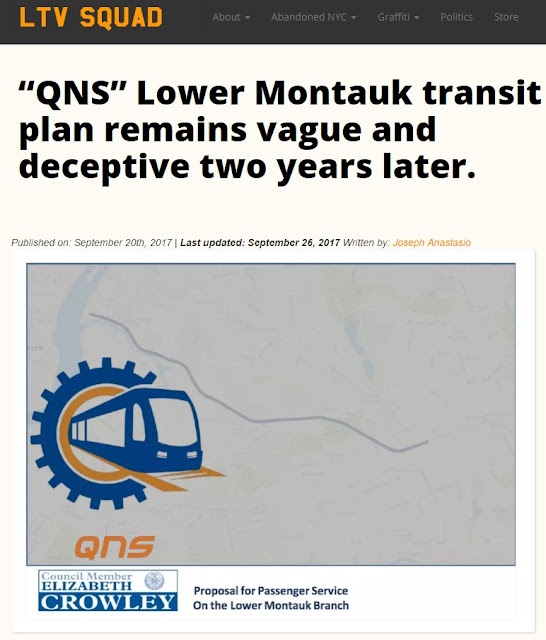 If you have a chance to sit down for about 20 minutes and really examine this entire presentation at the link from LTV Squad, it will be worth your time. Highlights presented below:

The need for new transit options is huge. However, I am often extremely disappointed by what passes for transit planning and advocacy these days. Many of the plans being pushed by our elected officials are devoid of facts, or purposely misrepresented with outright lies. These plans are too often not based on actually commuter needs, and are instead only take the considerations of the real estate industry to account. It is easy to see why our politicians are so concerned with pleasing the real estate industry, since many of them are financially supported by deep pocket real estate ‘developers’.

This time two years ago, Ray Cevoli penned a scathing rebuke of Elizabeth Crowley’s initial Lower Montauk transit plan. We had hoped, by simply pointing out many facts, that attention would be paid to actual reality (vs. a vague pie in the sky idea). Looking through the latest presentation on this route, I can see nothing has changed at all. We are two years into talking about this project and no closer to it ever happening in any form. 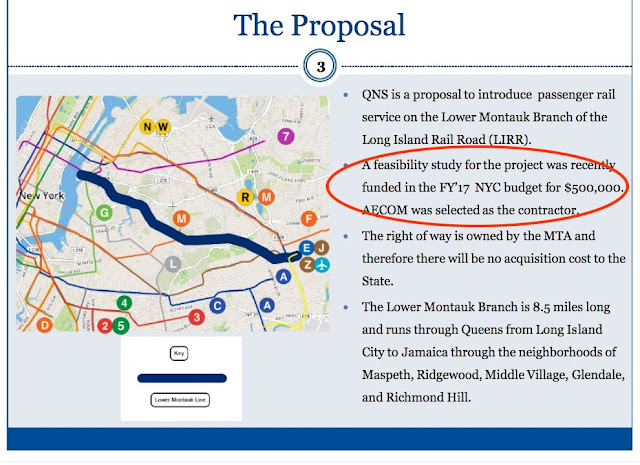 To illustrate my points, I’ve circled key areas of the presentation in red. Here we see that AECOM is being paid half a million taxpayer dollars to create a study on project. I’m a little confused here. Isn’t this a plan from Crowley’s office? Does she not have staff to do some of this research work? Is she herself adverse to work? I sure hope AECOM’s study considers all the facts, because that’s a lot of money. I could do the job for half the cost in a year.

[AECOM is also the consulting firm helping the city push for the Glendale homeless shelter on Cooper Ave.] - QC 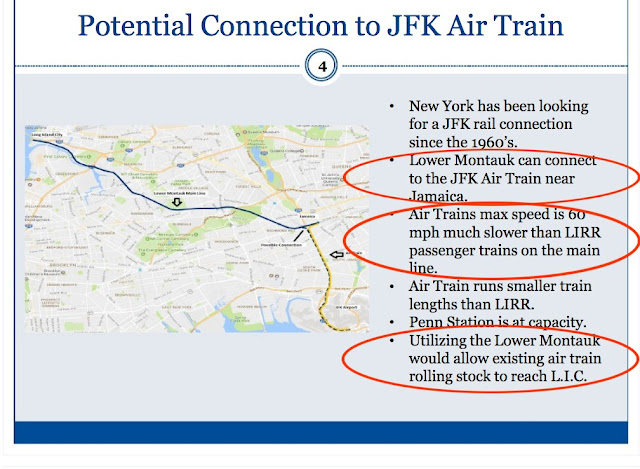 The last statement on the slide is a complete lie: existing air train rail cars can’t use the Lower Montauk line. Again, there is no third rail. Installing one, with a modern signal system, would be a billion dollar project. There’s also the little matter of FRA and ADA regulations, which are being ignored. All of those AirTrain cars would likely have to be replaced. Anyone who knows anything about rail operations knows this. This is not an oversight on Team Crowley’s behalf. They have been working on this for two years now. This statement is a lie. A purposely stated lie.

I’m not sorry to say this: lying to the public is not kosher. It is willful deceit with the intention of achieving a hidden agenda goal. And it is being presented right here, just one slide into this presentation. Once you open the door to lies, it throws every single other piece of information in this presentation into question. Now every line must be analyzed to verify if it is factual or fake news.

Again: we’re talking about an NYC transit project. Everyone knows we need more transit options. There is zero need at all for any lies. 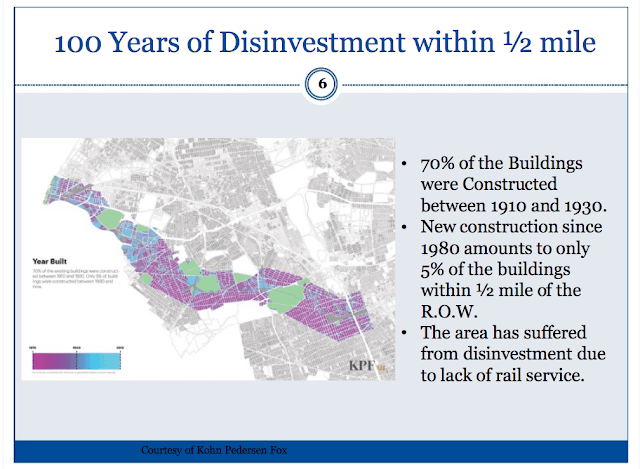 I found this slide interesting – disinvestment? We’re now going down the rabbit hole of evil real estate developers, who make it sound like older houses and buildings automatically means low value, bad for the economy, perhaps even blighted? Look at this map, and then go walk around these neighborhoods. In the residential areas you’ll find homeowners who care about their neighborhoods, maintain and improve upon their homes, and who like their neighborhoods just they way they are. The only purpose for this slide is to target real estate developer, showing them a part of the city that hasn’t see the skyrocketing rents we see in places like Astoria, LIC and Greenpoint.

It’s worth referring back to Ray’s article, where Liz is quoted as saying “there is a lot of underutilized manufacturing which is also threatening us." Again: none of this property is ‘underutilized”. Blue collar jobs are needed to maintain a large city. We need to work to preserve the few industrial zones we have left in NYC.

A footnote here: if you mention the “G” word to transit advocates, they get really bent out of shape. Personally I think it’s lazy to argue against a transit project on the grounds of ‘gentrification’. I wouldn’t even mention this G word if literally this whole (*&(*&^ presentation wasn’t geared towards real estate development. I’m not going to pound on this drum though. As you’ve seen, I have a dozen other red and yellow flags to throw. I’m sticking to those. Don’t be surprised if someone else throws this G flag though – and when they do, the only person to blame here is Team Liz Crowley for opening this door by putting out a presentation that is all about real estate development and not about actual commuters.

We explained what this was about before. Thanks to Joe for really driving the point home and exposing this for what it is. The sad thing is that most voters are dumb, don't read and swallow everything these tweeders throw at them as something positive.
Posted by Queens Crapper at 12:06 AM

I will throw the G word. Because that is what this is. Another strategy with the warped collective the Gentrification Industrial Complex of elected officials and predatory developers. And being that this involves Ms. Crowley, a person that gets more repulsive every time there is news about her, this fraudulent plan/conspiracy is amateurishly executed.

These moneyed and powered humanoids do not care about the citizenry. The part about comparing home owning to economic stagnation to build a crap transit line might be the most callous and frankly evil thing that these speculators and Crowley's feasability team concocted so far. These people are literally and clinically certifiably insane. And they deserve failure in perpetuity.

The Montauk line of the LIRR was in passenger service until 1998. It could be started up again to carry people. Once used for other purposes (parks? trails? car road?), you can never get these rail corridors back.

Lizzy has no problems with replacement of the current housing stock even though see lives near this proposed trolley. The minute her last term is up I'm sure she will move to a ritzier nabe, hopefully in January.

and she'll get re-elected...

She already lives in Rockaway with her fiance. The "trolley" as you call it, won't affect her at all.

And the Montauk line has been in continuous service. The line is used for freight. No threat of losing it.

she has a degree in urban planning
her professor who knows only the theoretical he was taught
then spewed it to the next class, and so on........

Not to mention all the whorehouse hotels she builds ostensible for homeless. She's a WOMAN, she needs it, BAD.

she says it'll be shiny and new

"She already lives in Rockaway". Great, then she can't run for 30th CD. O, wait, I forgot, she's a Crowley. Living outside the district never stopped them before. Never mind.

She's well connected with the local longtime realtors who have been destroying the neighborhood for years. You know which ones...

She already lives in Rockaway with her fiance.

Liz didn't come up with this plan on her own. Funny how the same company doing the study for the shelter did this for her. Isn't the neighborhoods fight against the shelter that there's no local transportation? She with met with local realtors to help push her plan. By the way, she doesn't live in Glendale anymore. She lives with her boyfriend.

She is selling out her neighborhood in order to advance her career. Who are these morons who continue to vote for her?