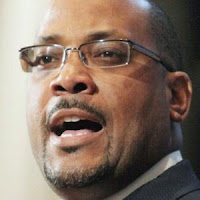 Sampson, who was alone, wasn’t hurt and no criminality was suspected in the accident, which was reported at 3:13 a.m., cops said.

Four unoccupied cars that were parked along 108th Street near Flatlands Third Street in Canarsie were also damaged when Sampson’s 2012 black Ford Taurus collided with one of them, setting off a chain reaction, according to the NYPD.

The powerful Brooklyn Democrat said he was driving to his district office to do some work when he swerved to avoid an animal in the road.

“A cat or something ran out in front of me, and I swerved to miss it, and I got into an accident,” he told The Post after arriving at his apartment last night.

Sampson, 47, had also planned to work out at a gym at about 6 a.m. and then spend a full day in court in connection with his private law practice, said his spokesman, Mike Murphy.

The crash scene is about six blocks from Sampson’s home and about a mile from his district office.

Murphy said that Sampson called 911 three times to report the mishap before cops arrived and that he remained at the scene.

Sampson wasn’t given a Breathalyzer test, and his car, which sustained “substantial damage,” had to be towed away, Murphy added.

The outlandish stories politicians are coming up with are becoming more more and effronteric.

I guess everyone has their own nickname for that part of the female anatomy.

Why is it so hard to believe that brother John Sampson was going to work at 3:13AM?

Haven't you ever heard that minorities have to work twice as hard as whites to get ahead?

I think brother Sampson should be commended for his dedicated work and all the great things he's doing for the minority community.

Perhaps he was distracted by a pussy, but I doubt that it was a cat.

How he was not offered a Breathalyzer or had a field sobriety test administered after smashing some number of parked cars.