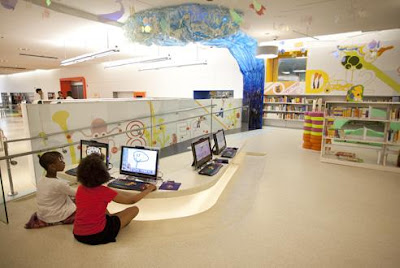 Less than a week after police arrested a "high risk" sex offender for allegedly sexually abusing two young girls in a Queens Library, local politicians are urging state legislators to keep sex offenders away from children at city libraries.

Though sex offenders are banned from entering playgrounds, Public Advocate Bill de Blasio and Councilman Peter Vallone said the law does not keep them out of kids' reading rooms at libraries.

In a joint letter to Assembly Speaker Sheldon Silver and Senate Majority Leader Dean Skelos, the city pols urged the leaders of both houses to pass a law keeping offenders out of those specific areas, which they said "protects our children from the criminals who prey on them."

Spokesmen for Skelos and Silver said they would review the letters.

They're already breaking the law by molesting children, do these 2 really think they are going to stay away from the kids' library room because of another law?
Posted by Queens Crapper at 12:36 AM

Well, I believe the courts have grappled with the issue of patrons using library computers to view pornography.

And recently we also learned in Queens Crap that they are considering vending machines in Queens libraries to boast revenue.

We've also learned that Bloomturd would like to limit sales of soft drinks larger than 16 oz.

So, I guess that means that if you're a patron of the Queens library system, you're only going to be able to purchase soft drinks less than 16 oz. at library vending machines.

Whether you can sit with your drink at a library computer terminal and look at pictures of Leonardo Da Vinci's David statue is another issue though, I think the courts will have to decide on this one.

But do we really need another law to keep perverts away from children?

It's not that kid touchers are going to just obey the new law. The purpose is that there is some kind of legal action taken against them BEFORE they actually touch a kid. Otherwise unless they actually touch someone, they are technically not doing anything wrong.

I wonder how much it costs to pass a law? on average? Printing alone must be a hefty charge. So these laws, which, face it, are effectively little more than photo ops, cost us $$$$$$$

What happened to parents watching their kids???

Who is going to be assigned to look out for sex offenders? The library staff? How will they know who is a sex offender and who isn't? There are thousands of them.

the only way it would work is if someone asked for ID from every adult that comes into the children section of a library. But they have already committed many crimes already, whats to stop them from having false ID? Child Molesters can not be re-habilitated, they need to all be left on a deserted island to fend for themselves.

The pols are famous for filling their time for frivolous things while the body count tabulated on Queens Crap just gets higher and higher.

How are they going to monitor this if they are always threatening to let staff go. Besides, considering the limited hours many branches are open ...

Children are not locked in the children's room, and there are other places where they can be accosted, including bathrooms. Some pervs are actually quite "normal" looking and clean-cut, unlike the security footage of the guy in this case. Short of ankle bracelets that set off alarms when they enter the library, there's not much that can be done. Criminal rights defenders will argue that these people have already been punished and done their time, so you can't keep punishing them now and in the future for things they did in the past.

soon after the old nyc Bd.of Ed proposed that teachers, without being monitored for their gender preference,teach sex education to elementary pupils.

i was the only parent in the P.T.A. meeting who objected loudly. many of the parents sat there like dopes.

i quickly removed my three children from public school.