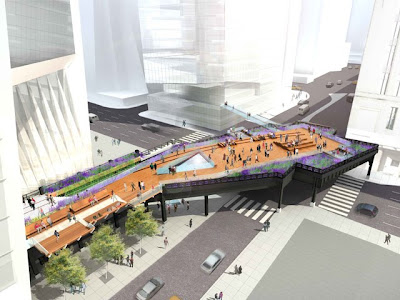 The High Line is set to get a whopping $5 million in extra cash from the city — more than almost any other park — even as it reported pulling in $85 million in private funds and established a lucrative concessions deal, city records show.

The High Line cash, appropriated by the City Council as part of the 2013 budget's capital expenditures, will be paid to the Friends of the High Line for use building the estimated $90 million construction on its third section.

The move has some park advocates questioning why the city is set to spend on the High Line such a large part of its $105 million, 2013 appropriations for 142 park projects — when the taxpayer money could go to other city parks that have greater infrastructure needs and fewer wealthy donors.

Geoffrey Croft of NYC Park Advocates, called the difference in city allotments to park space discouraging — pointing to several other parks that could use city cash for improvements, including Ferry Point Park in the Bronx and Highbridge Park in Washington Heights.

"When you consider the dramatic needs of other parks that need a tremendous amount of help, the disparity is unbelievable," he said.

"The High Line and Brooklyn Bridge Park, they’re exciting new additions to the parks system," Croft said. "But clearly that money could be used to take care of longstanding needs in other, poorer communities. But it’s not a priority."

Let's recall that Friends of the High Line was supposed to raise the money for their tourist playground-in-the-sky PRIVATELY. But they failed, so Christine Quinn saw to it that they got bailed out. Again. Meanwhile, parks in Queens look like crap or won't get built because "we have no money."
Posted by Queens Crapper at 12:03 AM

Ah yes, yet the council has no money for that six acre site in Whitestone.

What a bunch of bullshit!!!

Queens residents listen carefully. The city has run out of KY and Vaseline so keep bending over it'll only hurt a little.

you still do not get it....this site is the lavender mafia 's play plaza and they control where nyc tax revenues are spent.

Remember the kid in Wyoming who was murdered strictly because he was gay.

i hope the killers got the death penalty. but ,wait, the left wing is opposed to it. why ?

why is , mass killer Al Queda connected, muslim Nadal not on trial for killing many military personnel in Texas ? is it three years now since the murders took place ?
i read that the Obama gov. is claiming that this was a "WORK PLACE DISPUTE " ALL B/S from a bunch of A.C.L.U anti-americans.

are you tying to say that corrupt nyc politicians are to be exempt from scrutiny if they are "gay" ?

"Gotta keep the Euro-tourists and tower people happy THIS IS MANHATTAN" Let us not forget Williamsburgh and Park Slope - soon the subway maps for everywhere else will say "there be dragons here..." I'm starting to think EVERYONE should secede.

I walked the High Line for the first time on a beautiful Sunday morning back in May... I failed to see the appeal.

People had the curtains drawn. There are other times when it's quite entertaining.