All lined up and no place to work 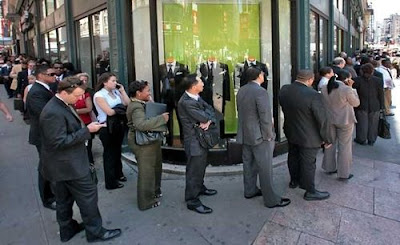 Despite continued job gains, the city's unemployment rate jumped to 10% in June, from 9.7% in May, matching its recession peak, the state Department of Labor reported Thursday.

The jobless rate was more than a full percentage point above last June's figure.

An analysis of employment over the past four years by the Fiscal Policy Institute shows that blacks have been hit especially hard. Household employment in the city was down 2.9% for the 12 months through May from four years earlier, but down 13.3% for black men and 8.6% for black women. It was up 8.4% for white women, the analysis showed.

An increase in people who held multiple jobs or were self-employed moving back into payroll employment could also account for some of the disparity. Mayor Michael Bloomberg also pointed to another factor: an expanding workforce. "As fast as New York City is creating jobs, people are entering the labor market even faster, which indicates optimism and confidence in the long-term future of New York City," he said in a statement.

I thought a third term for Mike Bloomberg was supposed to take care of all this. What happened, fiscal genius?
Posted by Queens Crapper at 12:46 AM

Keep on outsourcing. 18 million jobs sent overseas tht should have stayed in America!
Thank you Washington for selling our country down the river!

This post is about NYC job creation and the mayor's failure to do anything to help the economy.

The economy is being trashed at the national level by the lunatics in DC. I don't don't see how Bloomberg can be expected to prevent that from affecting NYC.

Because that was the entire reasoning behind term limits extension. That he was the only one who could lead NYC during the recession.

The mayor can do many things to help small business prosper, which is the number one employer in the good ol USA. How about making it easier to do business here in NYC, overbearing regs or working to provide small business loans for new and growing businesses. It's you folks who elected this shiester!

There are too many people in NYC.

There's always someone that will do the job for less, under the table.

Jobs that used to be real (for example a Macy's salesperson) now pay $10.00/hr with no benefits.

The problems are two-fold - outsourcing of white-collar jobs and excessive demand for blue-collar jobs.

if Black employment is so low then what are all those people doing working in NYC or State agency's?
too bad they don't count crack dealing as a profession or all those other illegal activities that Black Spanish -Dominicans are so very good at that they control in the NYC metropolitan area.

The concentration of illegals and people on some form of public assistance works to the advantage of the Democrats. Any business that could relocate out of New York is likely to have already done so.

So we are left the government as employer of last resort, along with the parts of the financial, media, and entertainment industries which have other reasons to remain.

New York's long decline just gets a little more visible once in a while.

Con Ed has locked out 8500 union members. All these people will collect unemployement and food stamps until their contract is negotiated. Not a word from Bloomberg or Cuomo. Very little in the press (which Bloomberg controls). No public outcry. What are these guys doing to get these people back to work? Nothing. Bloomberg is in bed with Con Ed CEO and Cuomo's right-hand man is on the Con Ed executive board. Local politicians don't care because there is no payoff for them. Union busting at it finest. Anybody out there care? No wonder the middle class is leaving New York in droves.

Unlike the future democrat illegal nationals who get it all for free (as a reward for hopping over a fence) those educated black US citizens working in NYC, State agency's like DMV, social workers ect HAVE to work a minimum requirement to get Sec 8 ca$h, food vouchers & services.

That’s one reason the people at places like DMV are so miserable. Those people don’t want to be there. All those black democrats need to rise up and realize they are getting SCREWED buy th epeople they keep re-electing!!!
Not every black person has a highrank relative from the West Indies to get them into the MTA Union.

are there not two sides to this mgt/labor conflict ?

i warned my son-in- law ,a union zealot for 22 years, not to listen to his dumb union leaders at Verizon, and strike two months ago.

only union fools con their rank and file to strike during a DEPRESSION,when 23 MILLION Americans are unemployed. he was lied to ,that his health care benefits would be lost.

mgt. fired him recently . the union did crap for him.

his family will be without heath care now and no weekly paycheck, permanently......

Gramps rolls out this story again. If your "son in law" can effectively tie his firing to retaliation for union sanctioned job action, he can probably establish a wrongful termination claim.

My guess that this is a made-up story.

NYC attracts all sorts of people willing to live 5 to an apartment/2-3 to a room. Cost of living is high. That drives the number of job seekers up.

Demographically, the Baby Boomers have just begun to retire, and the Echo Boomers/Millennials, are entering the workforce in droves. That drives up the workforce just as the economy is crawling along.

Large numbers of white collar and health care jobs will be automated. There is software that allows nurses and physician assistants to do the job of General Practitioner 95% of the time. There can be apps to treat patients before they need to get to a doctor and head off personal health and medical costs. Statistical software can spot concentrations of illness and greatly reduce cost of healthcare by concentrating on quality of care and attacking underlying causes.

OCR and search software can replace legions of lawyer needed to go over rooms of documents and evidence during discovery phase of legal cases. Properly formatted CAD drawings allow for automated construction estimating software. Even livery and cab drivers can be at risk if Self driving cars take off.

At the same time, companies are increasingly wary of training people. They fear personnel will jump ship. They also fear competitors will use lower cost structure that can come without training outlays to undercut them via product or service price.

recently the five liberal members of the SCOTUS ruled that obamacare is constitutional. AND A TAX!!!!!
the costs of this democrat voted law in 2013-2014 (it is claimed that few reps. read the 2700 pages ) to employers has resulted in layoffs and no new hires, in July 2012. this may happen till November or if a new administration and republican senate is voted in and functioning in January 2013 ?

private enterprise can not forecast labor costs till they absolutely know their government tax burden.

they can not print money to pay the employees, like the democrat federal government can.

American city and state governments can not print money and must have yearly budgets, unlike the U.S.Senate (dem controlled)without a budget for 3.75 years.

many states will opt not to accept the formerly forced federal medicaid expansion plan, because scotus has ruled it unconstitutional for congress to strip the states of ALL MEDICAID FUNDS, under obamacare.
MEDICAID EXPANSION will cost NEW YORKERS as much as $52 BILLION over ten years.