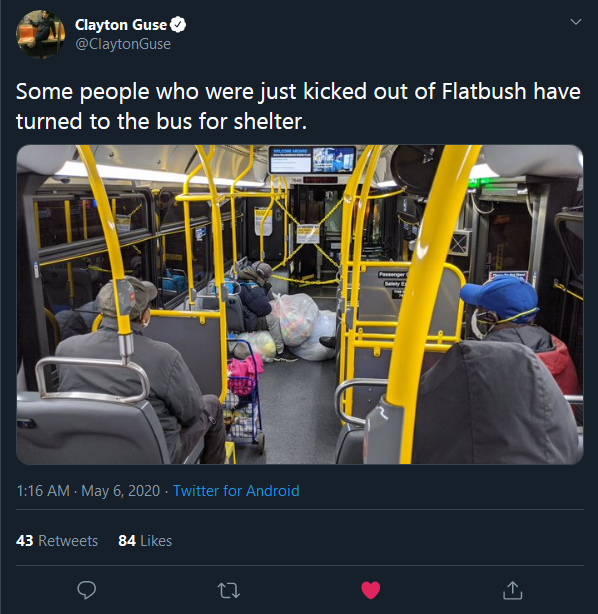 Nine homeless riders on the No. 2 train, evicted from their usual all-night tour of the underground early Wednesday, toted their belongings upstairs to a city bus soon cluttered with their garbage bags and a handcart.

“I’m not going to a shelter,” shouted Tyronne Batte, 35, who struggles with drug addiction and spends many nights riding the rails. “I went five years ago. I got robbed. People tried to rape me three times. It’s like prison with fewer guards.”

Night one of the 1 a.m.-to-5 a.m. sanitizing sweep and shuttering of the sprawling subway system over coronavirus concerns sent more than 2,000 confused homeless people onto the streets and aboard city buses, with Mayor de Blasio declaring the policy imposed by Gov. Cuomo would remain in place for “a matter of months” at minimum.

“My general hope is that we’re going to see more and more normalcy through the next few months,” the mayor said. Asked specifically when things might change for the late-night trains, he replied,
“When the crisis is over.”

NYPD Chief of Department Terence Monahan said most riders knew what was coming, and “no one was really taken by surprise” that the nation’s largest subway system would not run on its round-the-clock schedule.

Batte loudly disagreed before leaving the Flatbush Ave.-Brooklyn College station for the B44 bus shortly at 12:55 a.m.: "They didn’t make any announcement on the train.” He declined help from a group of six homeless outreach workers before boarding.


Another policy failure decision by Governor Cuomo and Mayor de Blasio.
Posted by JQ LLC at 5:46 AM

Unless these bums,derelicts and vagrant are paying the the fair,I hope the driver refuses to let them come on the bus. And if the start spreading out taking up more than one seat or common area with their trash,call the cops. There is a certain protocol about public behavior and now is the time to enforce it,not just to clean the subways,which is supposedly a regular chore?

Wait till November. By then the only person that could beat Trump will be Bernie and they will never let him get the gold ring - too many of the 'boys' would get hurt if he is elected.

By then the Dems will have no constituents outside of the ghetto and off of campus. Trump will have his '30 Days' in which he will propose legislation to the newly constituted Congress with both houses under the control of the Republicans. It will be the biggest program sent through Congress since Roosevelt's New Deal.

This garbage will be swept away. By the time it gets to the Supreme Court, Ruth would be off the bench. It will be the biggest lurch in government in 90 years. I can see the Bible-Thumpers calling this Pandemic the 'Hand of God.'

So the problem just moved from left hand to right hand, subway to bus.

Most drivers are just gonna go to their happy place and do their best to ignore the trash near them till the end of their shift.

Many busses are not collecting fairs. You just enter the rear door. Why don’t the teams that used to check tickets enter and eject anyone not behaving appropriately, such as taking up three seats with your junk or laying down. It’s not hard if you want to deal with it.

Is it occurring to anyone that this problem is never going to be resolved? Mental illness and addiction are too pervasive to overcome. When we all admit this, we will realize only drastic, outside-the-box solutions are needed. Who wants to live in a city that's majority homeless.