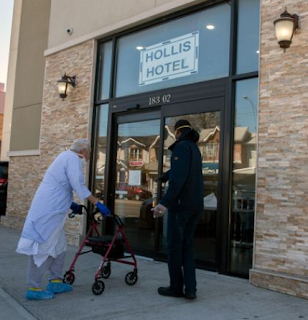 And every time one of these temporary guests check in, a company down in Texas pockets a $27 per room, per night fee.

The firm, Crewfacilities.com LLC, also bills the city $18 for every breakfast, $19 for every lunch and $34 for every dinner provided to the guests, according to records obtained by THE CITY.
And then there’s the actual hotel rooms. The city Office of Emergency Management blacked out the room rates spelled out in Crewfacilities’ contract, arguing the information was protected from public disclosure as a “trade secret.”

But according to an unredacted copy of a related document obtained by THE CITY, nightly room rates range from $128 for a room in Queens to $163 to spend the night near Times Square.

A review of Hotel.com Thursday showed much lower rates available at struggling hotels all over the city. A Hilton Garden Inn in Tribeca, for example, was offering a discounted rate of $89 per night, while rooms at a Best Western in Herald Square were going for $75.

So far, taxpayers have shelled out about $15.5 million for more than 8,600 rooms booked by Crewfacilities in hotels around town. That includes the per room, per night fee and the thousands of meals for guests who request them at the rates set by Crewfacilities’ contract.

In an interview with THE CITY Friday, Councilmember Ben Kallos (D-Manhattan), chair of the city contracts committee, questioned Crewfacilities’ $27 per room, per night fee, noting that the industry norm for such a booking fee is typically 10% of the room rate. That would come out to $12 to $16. As of last week, Crewfacilities had charged $2.5 million in these fees.


Kallos called on OEM to cancel the contract, estimating that between the $27 fee and the $71 per-day meal charge, Crewfacilities could be charging taxpayers $3,000 per month — above the cost of hotel rooms — for each guest.

“At the height of the pandemic we were desperate for hotel rooms and we got ripped off by a contract with $27 overhead,” he said. “We can and must do better by cutting out the middleman and going directly to the hotels. We can use the savings to fund essential services for youth and seniors this summer.”

As for the cost of an $18 breakfast, he added,  “That better be one fancy breakfast. If it’s $18 for a bagel and coffee, that’s expensive even for New York City.”

A few days ago it was revealed a company from Texas got a contract to build a hospital that was never used, now we got another Texas firm profiting from a pandemic.

What is up with these Texas connections? Could this be tied anyway to de Blasio's farcical presidential run last summer when he was traversing the nation for donations to his PAC's?
Posted by JQ LLC at 9:32 AM

Sometimes, I wonder if the purpose of this blog is to depress its readers, because the level of corruption I keep reading about makes it seem like we're only slightly better than Russia.

QC Reader said...
Tammany Hall is at it again !

I hate to say this, because I lived 40 plus years in NYC, but you "are" only slightly better, maybe, than Russia. NYC has not changed for the better and that's because of the political party that most all of you support, the democrats. They're lost in space and so are many of you, with them. Get rid of these children and elect some real thinkers. I now live in a red state, though I do not belong to either red or blue. I am independent.

They leadership encourages the electorate to act on the easy path like simple children and when voters are admonished to act responsibly by someone not in the leadership clique the public's response is not unlike a child told to do chores - they get very petulant.

The other card the politicians have is to recognize that most people lead rather sad lives with scant notice on their feelings - it anyone of power and influence even acknowledges them they get understandably 'happy' with their new 'friend'.

This is the reality of Queens. Most people, even after a few generations, keep the values of their homelands where representative democracy is non-existent.

This is the tale of How Socialism and Marxism Works..... Take a Temporary Crisis..... even one of your Own Making.... and use it to Advance an Agenda to increase your Personal POWER!