A roughly $21 million Brooklyn field hospital authorized by the de Blasio administration at the height of the coronavirus pandemic opened and closed without ever seeing one patient, according to city officials.


The Brooklyn Cruise Terminal in Red Hook was one of several sites across the five boroughs converted into a medical facility as a way to relieve the city’s overburdened hospital system as the COVID-19 crisis mounted.


Mayor Bill de Blasio announced plans on Mar. 31 — a day after the USNS Comfort hospital ship arrived in New York Harbor to aid in the coronavirus fight — for the $20.8 million Red Hook field hospital with an estimated capacity for 750 beds.

The field hospital was built by Texas-based construction company SLSCO. 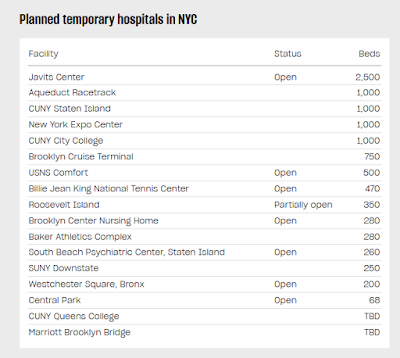 The Central Park Dog Woman gets extensive coverage and this barely a mention. So much for the 'media capital of the world'.

I am still reeling over the farce of subway cleaning. How to even get around town without getting infected.

Now they are talking about moving restaurants outside so the investors (who as a class are big campaign donors) can try to slow the inevitable failure of the eateries. Can you see everyone moving tables to let an ambulance through? And granny can walk extra blocks to get the bus?