Man dies after trying to swim in Rockaway Beach 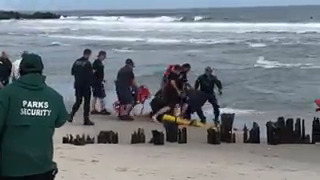 A 24-year-old man drowned in the waters off Rockaway Beach on Friday afternoon — setting an ominous tone for what could be a dangerous Memorial Day weekend on the city’s lifeguard-less beaches.

The unidentified man was pulled from the waters off of Beach 91st Street just hours after Mayor Bill de Blasio detailed plans to open the city’s beaches for people to play on the sand, but also begged them to not go in the water.

A witness who shot cellphone video of first responders hauling the victim expressed fear that pleas to stay on land won’t be heard, and will lead to tragedy.

“Why are there no lifeguards? People are on the beach and allowed on the sand but not in the water. This is going to happen over and over,” the witness told The Post.

“If there were lifeguards, we wouldn’t have had to call in helicopters and fire trucks. People were freaked out, saying ‘Oh my gosh, there’s no one to help.’”

Cops said the unidentified man and at least one other person had been jumping into the water.

The man was pulled from the water around 2:50 p.m. and was rushed to St. John’s Hospital in critical condition, cops said.

He couldn’t be revived and was pronounced dead around 3:40 p.m., cops said.

Sadly this didn't take long at all that someone had to die to expose how moronic and lethal de Blasio's pandemic policy decisions have been. As if not putting lifeguards out there would discourage people from going to the beach. Now 20 people have to do the job of what one or two would have done to save this guy.

Maybe if the distancing and activity bans on the beach included surfers and not favorably exempted them it wouldn't have encouraged this person (or even anyone else) from going into the ocean for a dip.
Posted by JQ LLC at 8:40 AM

Keep in mind, without lifeguards, SURFERS are the only help on the beach, before first responders get there when its too late.

And all the money the city was trying to save by not hiring lifeguards for the season just went out the window with the millions the city will now have to pay to settle the inevitable lawsuit from this.

The mayor kept his word. He was pulled out.

It's uncertain that a lifeguard would have been the deciding factor if this person died or not.

Every year at least 2 people die and somewhere upwards of 5 people die on the beaches due to getting caught in the top tide. Its usually minority/non-white people in their late teens or early twenties and alcohol is involved sometimes.

It doesn't matter who the mayor is to be quite frank. People will drown in the early beach season

Yeah, but where were they? Still waddling on a ripple tide for 30 minutes?

Rockaway Beach is a notoriously dangerous place to swim, at any time.

You're way off the mark JQ LLC. It's the city lifeguards who would not help you if you were drowning. They simply can not. The majority are in what they see as an easy summer job.

Anyone in Rockaway knows that the surfers rush to the aid of anyone in trouble. They know the ocean currents, are experienced in the ocean in all kinds of weather and they have the surfers code - a pride in being of Rockaway. What puny city lifeguard takes to the ocean in the middle of January?

The city lifeguards take a short course in a pool. They do not train in rough surf. There have been way too many incidents on the Rockaway beaches where the lifeguards did not perform basic first aid for beach goers and surfers stepped in before the city EMT's arrived.

Australian lifeguards train in the ocean. There's sea scouts for ocean rescue - young people compete to get into sea rescue. It's taken seriously, unlike here. Unfortunately, there are people working as NYC lifeguards who barely know how to swim and that's in a pool. Many do not have a background in competitive swimming, just a piece of paper from the Red Cross course.

I'm sorry the young man died. I feel terrible for his family and friends. This is a warning not to go into the ocean when you are drunk, high or have taken any illegal drugs.

One of the posters mentioned a law suit against the City. Sorry but they will loose it after the autopsy results. There are signs up on every few feet of the boardwalk in multiple languages saying that swimming is prohibited when lifeguards are not present and that there are dangerous rip tides.

Why such disdain for Bike Riders and Surfers ?
Who's next Hikers, Tennis Players and Cricket...

@Anon re: off the mark

Where were the surfers?

I see you and a few others here are trying to justify the favoritism the mayor is giving the surfing community with this massive loophole allowing them freedoms no other visitor to the beach cannot get yet. That's a big inequity and it leaves it wide open to suspicion of why the city would go out of its way to do this.

What's gonna happen if a surfer fucks up and dies? Gonna cry for the cops and parks dept. to come? "oh you gotta come and help us we can't find him dude!"

Why such disdain for Bike Riders and Surfers ?

Cyclists are always being favored with bike lanes taking away parking space. What are you talking about?

JQ LLC’s argument is why surfers are favored while others aren’t allowed to swim.

I don’t know the rationale for this decision.

Next on Queens Crap, Where are the Skateboarders when you need them ?

Why are we throwing blame everywhere for this and making it a large political scandal? A man went into rough waters with rip currents on the day before lifeguards are ever assigned (friday before Memorial Day) and tragically died. It is partly his fault and partly a natural tragedy. DeBlasio, hipsters, bikers are not really part of this story.

Maybe you should go and monitor the surfers to see when they won't come to the aid of swimmers or any beach goers. In fact, go in during rough waters.

Why so much hostility for surfers?

Who do you think was there on the ground after Hurricane Sandy? The surfers! They helped EVERYONE.

The mayor refused to let in the National Guard, the Red Cross and FEMA set up commands three days before the Hurricane. Even NYPD had evacuated. Yes, the FDNY was present for the residents in the burning buildings on Rockaway Beach Boulevard as the Mayor said on the radio, let Rockaway Burn. At the height of the hurricane, FDNY took people to safety in rubber boats.

The surfers are allowed to be in the water because they have respect for the sea. Unlike the drunk and stoned who think it's cute to go in the open ocean with no regard for rip tides and dangerous currents.

This isn't about the surfers, it's about the protocols and how opaque and set up they are. And how the Mayor and city parks are deliberately going out their way to please a certain community so they can enjoy themselves while everyone else has to abide by those protocols.

What the surfers did when Sandy hit is irrelevant, there is still a pandemic out there and we still have the same idiots guiding us through it. Why such hostility directed at yours truly for demanding equity and accountability?

What the surfers did after the Hurricane is relevant. This is what they do. They help other surfers, they watch out for each other and beach goers. I guess you've never heard of Dylan Smith, Michael McDonnell or Stephen Belson. Maybe it's in Dylan's and Stephen's honor that the surfers are allowed in the water. They're gonna go anyway. Who's going after them, you?

The elected officials and locals know that if their children are in the water and the surfers are nearby, the kids are safe.

I would trust a surfer before I trusted a NYC Parks Dept Lifeguard to come to my aid if i were in distress in the ocean.

If you really truly demanded equity and accountability, you would be going after the City on their lack luster training of lifeguards on ocean beaches. Have the City train lifeguards the way they do in Hawaii. That's not going to happen on Bill DeBlah's watch.

Sadly, even if NYC Parks Dept lifeguards were on duty at Beach 91st Street. , that young man still would have drowned and the City Lifeguards would have not known what to do except to dial 911.

You are only continuing to validate my opinions. If the elected officials know what you know, then why aren't people still allowed to swim?

Amazing how you trash de Blaz but assume he is honoring those people you mentioned with his brazen favoritism to the surfer community and the hipster demographic.

Apparently that young man still died even with the surfers out there. That incident happened at 3 p.m. in one of the sanctioned surfer areas.

Give it a rest.

@JQ LLC 'Give it a rest."
Only when you can admitt you where unjustly picking on Surfers.

I don't have to admit shit. Surfers don't have special needs. But apparently you think they do.

Curtis Sliwa just hilariously showed and explained how ludicrous de Blasio's discriminatory beach rules are. Tell your surfer pals to get out of the water.