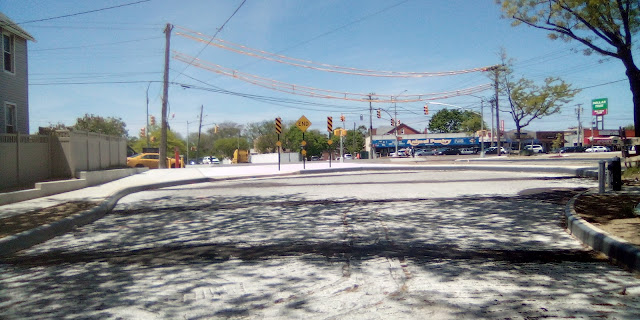 A lot of infrastructure improvements have been happening in Ozone Park after decades of oversight. But this one here, which was done between February and March according to a resident who was watching me photograph this is quite the curiosity. And as you will see, the stupidest and ultimately hazardous street redesign I have seen in this town.

This street is Albert Rd., a one way going west that intersects with Cross Bay Blvd. and is adjacent to 149 ave.. A lot of flooding always happens here after it rains so that may be why this was done going by all the bioswale looking spots recently installed. But prior to the D.O.T.'s decision to place a dead end here, drivers used to be able to turn right into Cross Bay and into 149 ave. heading east, being a two way street. 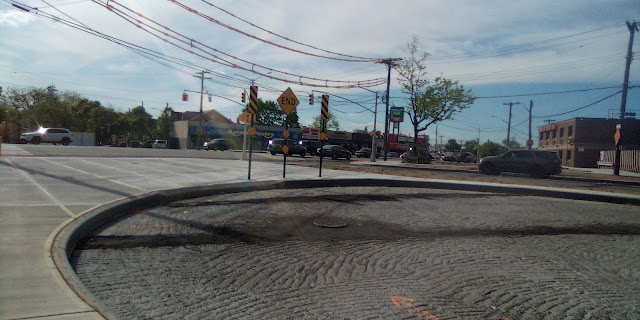 Surely, this new dead end will cut off any potential accidents but here's where it gets really stupid 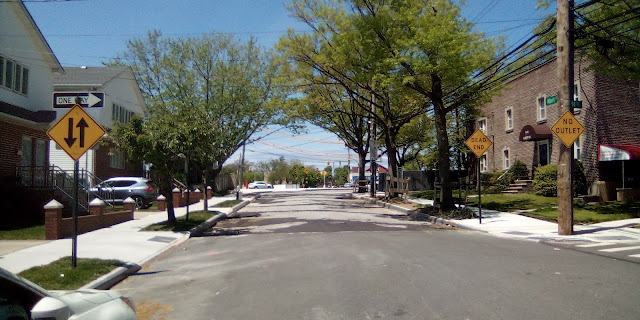 And why isn't there a stop sign placed heading towards it? 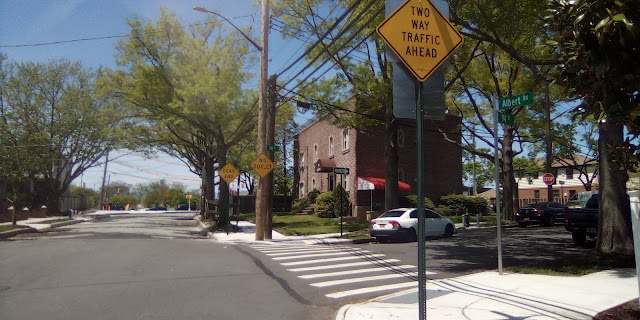 The D.O.T. did think to put a stop sign to alert drivers who were shocked to find this path blocked during their return east to access 149 ave., but it's obscured by a tree.

And instead of a two way traffic sign on the right there (which is already indicated on the sign on the south side of the street) why not a right turn arrow sign? I know we got those. 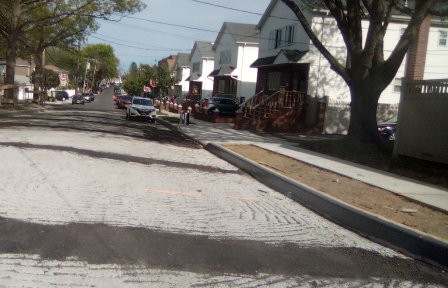 That former intersection used to be pretty dicey and it's good to see new infrastructure after decades of neglect because this area tends to flood a lot when it rains, but even when the city does something good they find a way to mess things up and produce a new hazard after getting rid of an old one. 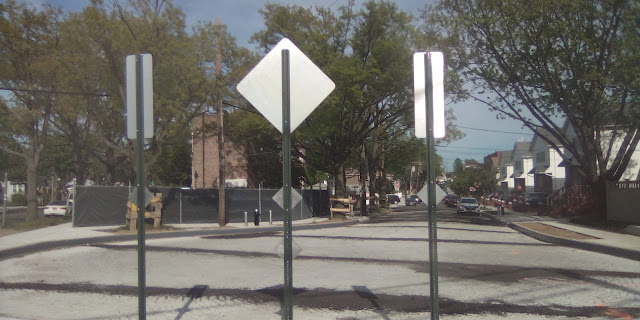 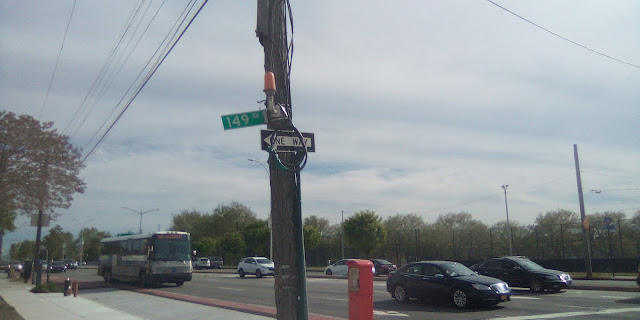 What are your thoughts about how DOT changed the lanes in Howard Beach? The left lane no longer ends at the median. There is about 18 inches marked off.

This means that there is less room to get around double parkers in the right lane. You used to have a little room to move out of the way now you have to merge into the other lane. This is mostly around Guidos. I mean Ginos.

Yet, the very dangerous intersection of Whitestone Expressway and Fifth Avenue in Whitestone, has had numerous accidents in past years. And though the neighborhood has appealed and appealed to the City and Community Board 7, etc. to make Fifth Avenue in the 145th block, a one way street going west, to block traffic coming off the Whitestone Bridge from turning onto Fifth, they are ignored. Does NYC do anything right?

1.In situations like this always call the community board and local elected officials.

Anon 2. Sounds like that street needs a bike lane

To the second poster, a list of complaints and dates better drive the point home.

Then provide phone numbers and challenge a news service to call.

If its election time add info for the challengers to get some traction.

I refrained from saying that for a reason. I don't want to give Polly and the bike zealot lobby any stupider ideas.

But you know what's interesting? There are zero bike lanes in Ozone Park. And in most of the Southwest and Southeast Queens areas. I guess we're not deserving of Transportation Alternatives attention?

> There are zero bike lanes in Ozone Park. And in most of the Southwest and Southeast Queens areas. I guess we're not deserving of Transportation Alternatives attention?

Guess the hipsters don't have it targeted as the next big neighborhood to takeover yet.

The bike lobby only has interest in the hipster communities. By their account south Queens is a bit too far and a bit too dreary. Ethnic food is hot if its in a trendy restaurant, tiresome if the entire block is involved in a three day Hindu wedding.

Something a bit unnerving if the drums start the moment the moon breaks the horizon. When that happens all you can do is double the guards at the parameter and retire early for tomorrow will be a hot one.

The Bike Lobby saves lives !
Reckless Car drivers kill millions World wide !
"How Many Car Accident Deaths Are There Per Year? Nearly 1.25 million people ​are killed in ​​car crashes each year. On average, that's 3,287 deaths a day. An additional 20-50 million are injured or disabled." Bill and Luna

And good use of Trump-like punctuations!