Willets Point businesses have had it with the broken roads 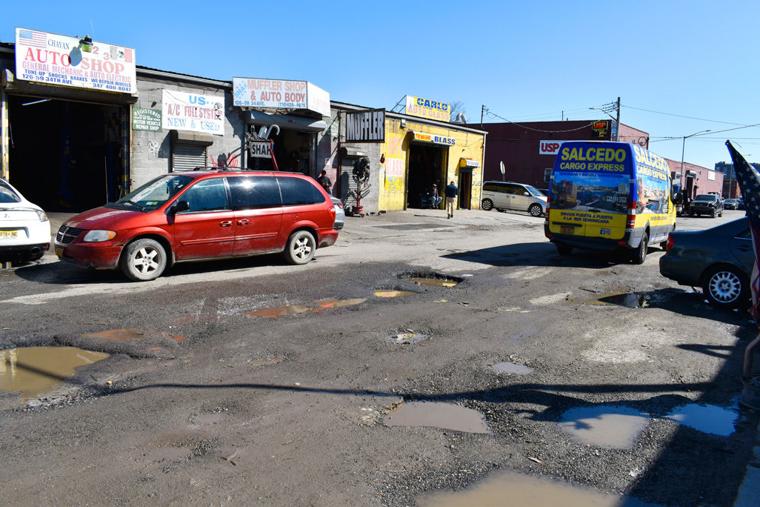 
Fifty businesses in Willets Point signed a petition sent out last week to Department of Transportation Borough Commissioner Nicole Garcia, requesting to meet with her about the industrial area’s dilapidated, cratered streets.

Decades have passed since most of the streets in the Iron Triangle were repaved. They have been compared to those of Kabul, Afghanistan.

But Willets Point business owners didn’t respond with much, if any, praise. The vast majority of the area’s shops are located more centrally within it. The west side of the 126th Place block that the city repaved doesn’t have any businesses on it.

Critics charged the DOT just wanted to make 126th Street look nice for an anticipated ceremony celebrating the block by Citi Field being co-named for Mets legend Tom Seaver. They said the agency did the one-block repavings on 126th Place and 127th Street to placate business owners who might be upset.

The DOT says it does not have the in-house resources available to repave Willets Point at large.
The agency also hasn’t responded to the petitioners, according to Irene Prestigiacamo, an Iron Triangle property owner who wrote the letter to Garcia on behalf of Willets Point United.

“Being very frank with you, I don’t expect to [hear back] right away,” she told the Chronicle.

I highlighted this because the DOT did something similar in South Richmond Hill last October when they resurfaced three blocks days before a movie was being shot on Lefferts Blvd.

Seriously, the roads suck. Fix them.

What you are looking at is political intimidation by presidential candidate and present NYC Mayor DeBlasio. The system wants these shops closed and out so that big real estate can develop in that area. You can't fight City Hall.

This has been a problem for decades. The City has made no secret that they're not repaving the area because they want to drive everyone in the area out of business and sell it off to already filthy rich real estate interests.

They are not even hiding it.

They are not hiding it because these American citizens have very little choice in the matter. They could go to court, but the courts are corrupt and everybody from the supreme judge to the guy who changes light bulbs is on the take. Sorry to say that, but that's the way it is.

Drive on the GCP and the Kew Gardens Interchange see all the lighting that is out. That includes the JRP past Metropolitan Avenue.
How does one get to be a borough Commissioner without an engineering degree?

How does one get to be a borough Commissioner without an engineering degree?

Remember how the big Commissars in the Soviet Union were good Communists and ran the USSR into the ground?

So NYC has, to run things, good Democrats, as defined by a point scale of gender (both natural and perverse) as well as ethic background and skin color. Not by skill, aptitude, or training. They are driving the City into the ground.