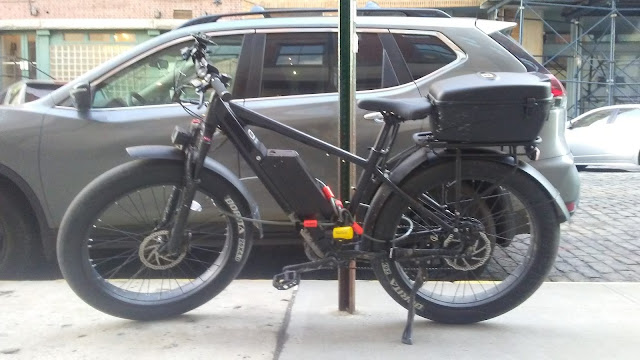 The state legislature is on the verge of legalizing e-bikes and e-scooters in New York City after a deal was reached Monday.


Lawmakers will vote Wednesday on legislation originally introduced be state Senator Jessica Ramos and Assemblywoman Nily Rozic that would end the de Blasio administration ban on e-bikes used by thousands of immigrant delivery workers as a public safety issue while NYPD statistics show they caused just 9 pedestrian injuries in 2018.


“For many of my neighbors, who are immigrant delivery workers, using alternative modes of transportation is a matter of livelihood,” Ramos said during a June 17 rally with workers in the State Capitol Building. “Legalizing e-bikes and e-scooters is a matter of equal access to our streets and our city.”


Ramos added the legislation will decriminalize the work of the estimated 30,000 food delivery workers who use e-bikes daily across the five boroughs.


“From lost wages and confiscations, delivery workers in New York City have been impacted by the ongoing criminalization of unregulated e-bike for far too long,” Rozic said. “Passage of this bill would not only deliver economic justice for thousands of workers, but also bring New York into the fold as micro mobility takes shape across the country as a means to provide affordable transportation alternatives.”

“We appreciate this commonsense legislation that clarifies the rules around e-bikes on our streets,” City Hall Spokesman Seth Stein said. “Safety for everyone on our roads is a priority, and we look forward to work ing with legislators and communities as we deliver plans to implement the new law.”

I wonder which foot delivery app Assemblywoman Rozic ordered for that word salad. I don't know what economic justice will be served now that these electric motorcycle users will certainly be emboldened to break traffic laws to make their deliveries. "Micro-mobility"??

E-bikes would be fine if the riders didn't run red lights, ride on the sidewalk, and ride backward down one way streets.

Food got delivered successfully for decades on bicycles. I'm not sure how essential these e-bikes are to anyone's livelihood.

Are there going to be age restrictions? Will there be licensing? I have a middle school teenager in my community who thinks that riding one of these is OK -- no helmet either.

The "e-bike" riders already use the bike lanes. The worst riders, and there are a lot of them, whiz by close and you don't even hear em. If anything they belong in the vehicle lanes because they all go the speed limit of 25mph.

They absolutely belong in the vehicle lanes. I've had too many close calls with motorize scooters going way faster than any bike coming down the bkie land in the wrong direction. I don't want to be responsible for an accident they cause because of their speed.
But if they're in the vehicle lanes, it will be like being stuck behind someone who follows the Zero Vision artificial speed limit. There's already too many of these road rage inducing cattle without motorized scooters who can't go any faster.

Does "legalizing" them require insurance?

So,they were illegal in Manhattan? Could have fooled me. Last I heard,deliveriy guys compromised by wearing a safety vest with business name attached , and a helmet.

Yes,the jobs no one wants to do. Delivery guys feed their families,moves the economy. Rather have them then grubhub or uber eats.

Time to put a go pro in your car and record everything....

They go much faster than the brakes are capable of slowing them down. They should be governed to a maximum speed of 10 mph.

Because it's the culture of cheating ingrained in the tech industry. This was decriminalized mostly because the app-food delivery industry, like the app-hail cabs, was never regulated and it has become way to big to stop despite the constant illegal behavior of their riders. And also because it's a given that these electeds rely on these scofflaws to deliver their lunch and dinners.


Yep, without question and they aren't that expensive.
I have 2 1080P hidden up in rear view mirror and in the back window with 64 gig media cards. I put them in after 2 assholes driving beaters tried to set me up with a rear ender near South Hampton.
Almost all the drivers in Russia have them to protect themselves.

Wanna have some fun? When you see 'em, tail behind them, then blast 'em with your horn.

Koko's behavior is exactly what is forcing bikers to do illegal things.
We need undercover bike cops to lock up all the Kokos

We could eliminate all of this by simply having people go get their own food. Yes, it's inconvenient but if people didn't use the delivery service then there wouldn't be these people out there doing food delivery by e-bike.

Does the crazy state of New York require that these scooter/bike drivers be licensed just like automobile drivers? Registration? Plates? Insurance? I doubt it! But if they are the coveted illegal aliens of NYC, it won't matter because the NYPD couldn't even ask for their I.D.(license) without violating the Constitutional Rights (which is what?)

##NYPD couldn't even ask for their I.D.(license) without violating the Constitutional Rights (which is what?)##
---------------------------------
Nada, Nothing. Driving is not a right its a privilege not covered under the Constitutional. The cops can stop you, ask for ID, detain and decide to toss you in the shitter for near any reason. Especially is you argue with them, then they get you on obstructing or interfering with a PO.
You don't need to be Ace Frehley to get arrested with a motor vehicle or bicycle