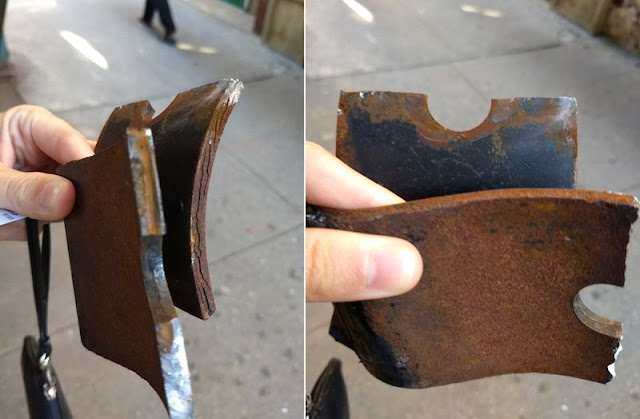 
A woman walking beneath the No. 7 subway tracks Monday was nearly struck by a falling hunk of rusty metal, the fifth reported incident of flying debris along the 104-year-old elevated structure this year.

Erin Koster, 37, was crossing Roosevelt Ave. at 53rd St. at around 4:30 p.m. when she said the piece of metal fell in front of her. Kostner said the debris weighed about a pound, enough to cause serious injury.

The Woodside resident said she’s been aware of the ongoing issue on the line.

“We don’t drive under the train anymore at all in the car, because why would you,” said Koster. “But if you live in this neighborhood, you have to walk under the train tracks.”


The issues along the No. 7 line became well known in February when a falling beam nearly impaled an Uber driver on Roosevelt Ave. near 65th St. Two weeks later, a hunk of rusty metal cracked the windshield of a car parked beneath the tracks near 62nd St.

Metropolitan Transportation Authority officials have repeatedly assured residents that it’s perfectly safe beneath the tracks, and on Tuesday said they were looking into putting up netting to catch any falling debris.

Agency spokesman Shams Tarek said Tuesday’s falling debris appears to have “broken clean” without any sign of slow deterioration or stress to the structure.

Broken clean. Looks like the MTA is becoming more adept at propaganda than at maintenance.

Lookie here, an update from THE CITY:


The MTA said Tuesday it will install protective netting beneath “limited” sections of elevated train tracks throughout the city — including along the No. 7 line, where debris has repeatedly plunged onto Queens’ Roosevelt Avenue.

The agency’s move follows the latest spills — both near the 52nd Street stop in Woodside on Monday and Tuesday.

“It’s otherworldly that we have so many people in Woodside, Queens, when they walk along Roosevelt Avenue are looking up and saying, ‘Am I next? Is something going to happen to me here?’” said Councilmember Jimmy Van Bramer. “They’ve got to fix this.”
Van Bramer has been pressing the MTA to install netting beneath the 7 tracks in the wake of several heavy items plummeting from the elevated structures.

The problems underneath the line started in February, when a piece of wood spiked the windshield of a passing for-hire vehicle. That scare prompted the MTA to pledge an inspection of “every inch of elevated tracks in the city.”

But until this week, the MTA had been noncommittal about installing netting.

THE CITY last month reported that New York City Transit President Andy Byford objected to  Van Bramer’s proposal, warning in a letter to the Council member that netting would “impede access, close-up inspection and assessment of corrosion or defects on the structure and cause extensive street-level traffic disruption to install and secure.”

On Tuesday, a spokesperson for Byford said the No. 7’s elevated structure “has the attention of the highest levels of MTA leadership,” and that the authority is taking the netting on a test run.

The MTA tells lies
That's a stress crack, like on old airplanes and ship hulls get. The rivet stayed in but the metal "fisheyed" and split around it.
If this is what going on the whole structure in in danger of coming down, they will need to slow the trains down. Its going to be hell on riders

Thanks Gino for explaining "broken clean"

The MTA decided to allow trains to go faster months ago. I wouldn't doubt this is happening on the underground tracks too. We are in serious trouble.

But hey, good thing there's free wifi and more LED screens on the platforms and that the app details more of the MTA's malfunctions.

All the deplorables wanted to abolish construction scaffolding?

"It's perfectly safe!" What could go wrong? Until the voters of NYC finally wake up, things will only change for the worse. People all over the nation are wondering what's wrong with all of you!

The city's neglect for Queens is absolutely disgusting JQ LLC

Anyway more about what your looking at:
The rivet holds the center of that bracket water tight but lack of maintenance has caused water to creep in from the sides and form rust. This rust expands (like when you wet a dry new flat sponge) only with 1000s of pounds pressure causing a continuous pry bar effect. The combination of vibration, wind and swaying when the 800+ ton trains cars brake completes the rest. -POP!
That is exactly what your looking at here.

Sandblasting & painting was the old traditional way of dealing with this but its labor intensive and time consuming.
This all could have been avoided by using a non toxic rust converting primer such as Corroseal followed by the installation of an acrylic caulk prior to painting.
The dopes at the MTA are to perhaps uneducated to use such modern methods or want $$$ contracts that will last 20+ years.

To you shitheads at the MTA and City Hall:
Rust Converter is a water-based primer, contains two active ingredients: Tannic acid and an organic polymer. The first ingredient, tannic acid, reacts with iron oxide (rust) and chemically converts it to iron tannate, a dark-colored stable material. Tannins are a group of water based natural products extracted from fruits, trees and grasses. The second active ingredient, 2-Butoxyethanol, is an organic polymer that provides a protective primer layer. The overall chemical reaction converts rust into a stable, black protective polymeric coating that could have bought you another 30-40 years if caught in time.

This is a tragedy waiting to happen. Why not get an MTA employee on it and bump up his/her salary to a modest half a million bucks? Meh, it’ll never work.

Thanks gino. I am going @ the MTA with that.

And I'd like to point out, and bare with me Crap readers because I know how a lot of you feel about this issue, that the extreme effects of climate change, with the heavier downpours and more violent winds are exacerbating the conditions of the parts Gino was talking about. There are going to be brackets breaking clean with more frequency now.

And I am bringing this up because there are supposed to be so called progressives running this city and state that are giving the impression that they are aware of the fragile environment. (Although their tolerance for waterfront tower development proves their phoniness in spades)

Fuck the MTA, the worst fucking transit system in the universe.

From what Gino is saying I consider myself lucky to be working from home. It's bad enough to have terrorism and bombs on the subways but what happens if the overhead subway collapses? The optics in my brain of that catastrophe is mind-boggling. And Roosevelt Avenue isn't the only overhead subway. What is happening there?

The MTA has kicked the can on the 7 line for too long and is now at the cliff.

This structure failing is a disaster, and my guess is no way of fixing promptly this without closing Roosevelt ave and the sidewalk one side at a time. Possibly including a track.
The fix will would require fabrication of parts, scaffolding and scissor lifts.

My second guess is they will put nets and keep things as they are till something catastrophic happens. I large falling piece would cut through the net and kill somebody, perhaps flattens a bus.

Climate change, the modern day opiate for the masses.

It happened under the el in Ozone Park too.

Hey, believe it or not, the choice is yours.

Breaking news on Queens Crap weather and climate change are not the same thing !

Maybe the people need to take a tip from the guy who recently sued various businesses that were making noise (and won). He had been filing 311 complaints and politely asking the businesses to tone it down, to no avail. When the lawsuits started, they quickly adjusted volumes and paid him settlement money. Take the same approach with the MTA and start suing them for this hazardous condition.

The reason that city services are declining is that they are managed by, and staffed by, the 'right' people who fill the Party's fantasy of the 'correct' people. As a past example, the Soviet Union was not run by competent people, but by Party apparatchiks who had the 'correct politics' rather than the 'correct competence.' The country became a train wreck.

So the Party has defined your usefulness to society as what is good for the 'Party' and its conception of a 'Brave New World'. 'Getting Things Done' takes a back seat to 'What is Good for the Party'. Goes a long way to explain the increasing sense that the city is served by third world infrastructure set by third world culture. Today, its your ethnic background, your skin color, your sexual orientation, your political views - that governs your usefulness to society - or so the Party tells us.

Absolutely, if anything good happens in
Queens they move it to Manhattan.
eg CUNY moved optonics to Hunter.
Mind you Queens kids top the NYS Math League

You mean explosion of assholes

Maybe the 7 line should go underground?

This is sort of related to these trains.
Is it just me or have any others been noticing water bottles filled with what looks like pee on these trains, stations and around the city?

I think Byfords decision to speed up the trains has made the usual method of whizzing out of the cars perilous.

That may explain the last few deaths that weren't suicides.

11 car trains and smaller headway’s add weight to the structure...

"11 car trains"
Each car is 60-80 tons and they all brake and take off in unison.
The structure does sway around 2 inches; you don't notice it because the acceleration of this sway is slow. This is due to the dampening effect of the structure being so large and interconnected.

The MTA is in deep shit with this. A good failure could send a load bearing beam, a cross member or a train crashing down.