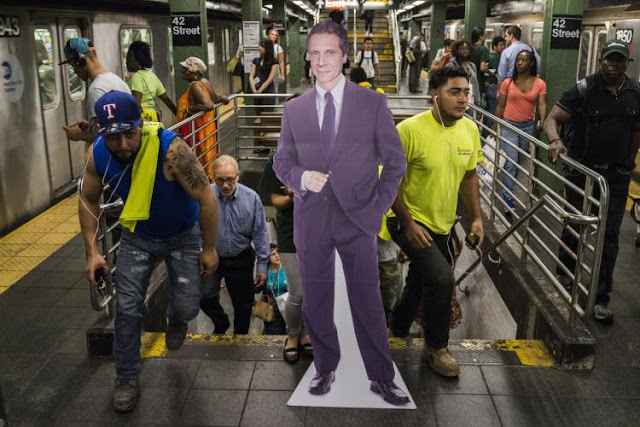 Gov. Cuomo on Tuesday threatened to take the air out of NYC Transit President Andy Byford’s plan to save the city’s subway system.


Cuomo’s budget director Robert Mujica said in March that the MTA’s next capital plan is expected to need $40 billion. A major chunk of that money would pay for the first half of Byford’s “Fast Forward” plan to overhaul the city’s transit system. Byford’s plan is expected to cost at least $40 billion on its own over the next 10 years.

And what of all the taxes NYS/NYC will be collecting from their Marketplace taxes.
I believe it was said those taxes would go to help the MTA, is that still the case.

MTA/LIRR also needs to clean up their houses with the excessive overtime.
It's better to employ more staff than pay the overtime. The huge profit driven companies are all about more more more, but NYC riders will have to pay for the crappy service and dirty stations filled with homeless.

As Butcher Bill would say when he saw the Irish coming out of steerage in Gangs of NY, the money is for 'the Harps.'

The first priority of the Machine is always the Machine and that money is to go for building a future Democratic base even if that means importing one and paying for it while the rest of the country rots.

We see it often in nature when a parasite takes over the body and brain of an organism and uses it for the parasite's benefit. This is why our government is increasingly a Zombie.

We're paying fares thru the nose, he better one, or he gonna get a big sooooprise up his nose

That's why we have "authorities" politicians never want to spend money with results in the future. We need some buffer between them and the money.

When is anyone in state prosecution services going to slap a pair of silver bracelets on this openly practicing career criminal, since his equally crooked, filthy and corrupt, demon seed of a father raped, ravaged and tonsured New York State to smithereens? Everyone else has been impeached, indicted, prosecuted and incarcerated——EXCEPT, that is, the Cuomo Criminal Enterprise of Albany!

That's why I correctly refer to the dynastic, cradle-to-grave, government grandstanding crime family ring as: 'CRIMES WITHOUT CRIMINALS' - and, the ever languishing public be damned!

❝A people that elect corruption, politicians, impostors and thieves are not victims ... but, accomplices.❞ ——George Orwell

Does Pataki have a son?

Yes it is, because they keep on innovating new ways and renovating the old ways of entrenched hedonistic corruption in government.

Tish James is allover it I'm sure.

Nothing will ever change at the MTA while there union exists.
Even FDR did like the idea of government employees being in a union.

Anonymous Anonymous said...
Nothing will ever change at the MTA while there union exists.
Even FDR did like the idea of government employees being in a union.

-------------------
WRONG, learn your facts. This is something that piece of Shit, Scott Walker used in a speech of his and it not correct. And if you think unions are the cause of the issue, you are living in a major bubble that big corporations and CEO's want you to continue believing. This country's greatest prosperity for the average person was when unions were at their highest. I guess you have no problem with greedy corporations, greedy boards of trustees and majorly greedy CEO's who could care less about the average worker trying to get by.

Peddle your bullshit elsewhere and become educated on issues.

How did we get to folks using the
left/wrong side of the stairs?
Nuns would crack our knees with a ruler

By Ford is doing a pretty good job. Hopefully he’ll put a few $$ into lighting the outside train yards so we can see when inspecting/ repairing cars every night.