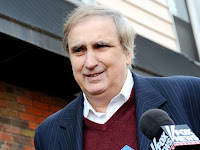 Assemblyman Vito Lopez and his political allies have found a nifty way of ensuring good press: publishing their own newspaper — and you’re paying for it!

The Bushwick Observer, a newspaper founded in 1995 and published by the Ridgewood Bushwick Senior Citizens Council, receives about $70,000 a year in state funding for its budget — not including revenue received from ad sales.

More than 9,000 issues are distributed for free in Ridgewood Bushwick-controlled senior centers and housing developments, businesses and government offices throughout Bushwick every month.

The paper, which operates out of a building owned by Ridgewood Bushwick, is a more sophisticated version of the kind of mailers that elected officials typically send to constituents, consisting of short articles and photographs of city and state leaders attending Ridgewood Bushwick-sponsored events in Lopez’s district.
Mac Support Store

Nearly all of the newspaper’s budget is funded from a member item earmarked by Lopez ally, state Sen. Martin Dilan (D–Bushwick), who contributed $70,000 in funds last year to the enterprise — about half of his $135,000 total allocation to Ridgewood Bushwick programs.

The practice of using a state member item to fund a newspaper is extremely rare. Records show that only one other allocation has gone to a newspaper, a $500 award for an upstate high school to start its own paper in the 2009-2010 school year.

And let's not forget City Hall loves him, too.
Posted by Queens Crapper at 12:47 AM

I always thought Pam Fisher was his girlfriend.

Vito? Lopez? Doesn't sound like a white guy to me. *sigh* all these non-white, America hating mediterranean people sneaking into America and trying to destroy it from the outside in.

He learned from Ackerman. So what!