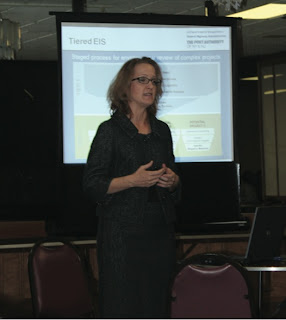 Truck traffic is a constant and serious concern in Maspeth where living adjacent to the Brooklyn Queens Expressway and the Long Island Expressway creates a torrent of trucks travelling through the neighborhood. For the last decade, community activists have fought to relieve truck and traffic congestion in Maspeth, and they have serious reservations about the recently revived Cross Harbor Freight Program being considered by the Port Authority of New York and New Jersey.

In 2004 the community fought and won a battle against a plan that called for a harbor tunnel connecting New Jersey and Brooklyn, which would have required a 143-acre intermodal station in Maspeth. The tunnel wasn’t necessary, the opponents of the plan said, and the intermodal station would inundate Maspeth with pollution from trains and in- creased truck traffic. Mayor Michael Bloomberg denounced the plan and it was eventually killed.

Now the Port Authority and the U.S. Department of Transportation Federal High Administration (USDOT) is reopening ideas to improve the movement of goods around New York Harbor—specifically how goods move east of the Hudson River to the west and vice versa.

For the Port Authority the no action alternative is unacceptable. Maintaining the status quo would lead to almost a 33 percent increase in traffic and associated costs in New York City, according to Laura Shabe, Port Authority manager of the Cross Harbor Freight Program.

Using the existing freight rail system, which is “underutilized and already built,” is one hard solution Shabe is studying to ease the traffic flow.

These alternatives, however, are unacceptable to Maspeth residents. The general consensus from letters sent to the Port Authority by civic groups and politicians as well as the residents at the COMET meeting was that while attempting to decrease truck traffic is an admirable goal, any plans that don’t seriously investigate the impact it could have on communities would be unacceptable.

“I don’t support any plan that would put an intermodal terminal in Maspeth,” City Councilwoman Elizabeth Crowley (D-Middle Village) said. “We already have a tremendous amount of truck traffic.”

Many longtime Maspeth residents delivered impassioned remarks, vocalizing their frustration with any plan that would involve more rail and truck presence in the community.

“How much does the city want to dump on Maspeth?” asked Linda D’Aquaro, whose son is asthmatic. “If you have alternative sites, why don’t you take it there? We’re already suffering.”

Manny Caruana highlighted what he and others believed is the need for the agencies involved in the project to take a particularly closer look at all maritime options.

“The impact on the surrounding community is going to be horrendous, because we’re going to be inundated with smaller trucks,” he said. “Transport it by water — you don’t need ten billion studies.”

Hey, it's another unnecessary boondoggle pushed for by Bloomberg and the EDC! You know what that means. Actually, this one is wasting time and money because Jerrold Nadler accepted tens of thousands of dollars from lobbyists for the railroad industry and because it benefits the communities he represents in Manhattan. Maybe the talking heads who are so concerned about the effects of increasing truck traffic - which their own study says will increase even more WITH the tunnel - can explain how we're going to pay for this when we have no money for any other rail project in the foreseeable future.
Posted by Queens Crapper at 12:25 AM

The original reason the Port Authority was created was to build the Verrazano Narrows Bridge and this tunnel.

The original reason the Port Authority was created was to administer the common harbor interests of New York and New Jersey.

A train tunnel is not a harbor.

Don't matter most of us will never live long enough to suffer from it.
Make no doubt in 10-15 years Queens is gonna be a bankrupt 3rd world gang ridden slum like Los Angelos. Who would want to live in it ?

A whole county of cheap desperate labor is what the mayor and his Zionist posse is planning.
Running Archie bunker out of town and special interest has been his plan all along.
Welcome to the new King Bloomberg Pueblo City east if the Mississippi

Actually, Todd, there's no reason to do this project at all. It's not necessary. There's no incentive for companies to use rail to ship goods that already aren't doing so and no way to pay for the tunnel.

The Port Authority was close to closing up as a public authority because all of its projects had paid off their bonds. But they got the idea, hey, we're a tax exempt "public authority" not directly answerable to the voters and pushed in the courts for the right to own real estate like -- the terminal of the Hudson & Manhattan Railroad and surrounding area -- today's World Trade Center site.

The PANYNJ is always looking something that can continue to justify its existence.

What are the odds of this actually happening? And when do they decide this either way?

As long as our economy of un-funded entitlements continues a tunnel makes no sense. Not enough wealth will be created to buy,sell, trade or even give away. All tax revenues will be going to pay creditors and maintain pensioners at a marginal existence. People will not be doing a whole lotta of consuming.

Actually, this tunnel makes a lot of sense. It would be great to get some trucks off the road. Looking forward to it.

Actually, it won't get the trucks off the road. There actually will be more of them WITH the tunnel than without.

Anyone who thinks this will get trucks off the roads should read this and this.

Christina what are the odds this actually happens?

I don't know, from what I have been reading, Mr. Nadler is the most powerful pol in NYC right now and he's the one pushing it.

Uhh yeah, sorry, but I'm not getting my "facts" on the Cross Harbor Tunnel from the Fox News of local blogs.

Um what? None of those links have anything to do with this blog. They were written years ago by independent sources.

Yes, let's just believe what the PA and EDC tell us to believe without questioning it.

first of all TODD we are not only a white neighborhood and I'm sure blacks,spanish,asians would be offended by you... yes we don't want more trucks, we have enough with all the traffic coming through from brooklyn, waste mangement, and all the commerical companies in lower maspeth. Plus with all the schools our city believes maspeth can support we have school buses and parents driving through.. so NO i don't want cross harbor coming here and they admitted to having alternative sites.

I read the article C. Wilkinson referenced and I like the idea of a dedicated truck ways. Perhaps re-engineering the Belt Pkwy by adding a 4th lane each way for trucks only. And likewise for the GCP in Queens.

What consideration is being given for making the tunnel multi-model and continued via the LIRR right of way as a linear city or park?