Ackerman vs. GOP on Dream Act 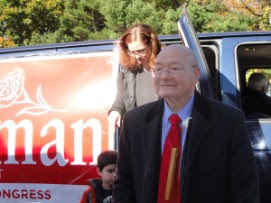 "The DREAM Act is a humanitarian bill that helps kids who are our neighbors that are being punished for a decision they did not make," Ackerman said. "All children – documented or undocumented – deserve the same basic educational opportunities that this bill provides."

The act would allow children who were brought to the United States before their 16th birthday and have lived in the country for at least five years to earn permanent legal status.

The bill would require that youths had no criminal record. It would assist them in gaining citizenship through college attendance or joining the military.

Ackerman said the legislation would help as many as 934,000 students who are presently in elementary or secondary school.

"We must fight to pass this legislation now before the current Congress ends because next year we won't have the votes," he said. "We owe these children that much."

Ackerman's letter, which he sent out last week to members of Congress, currently has more than 40 co-signers.

In the letter, the congressman writes that undocumented children have been "held hostage by a national immigration debate that has been both hostile and overtly partisan."

As President Obama and his Democratic allies push to pass legislation this year that would allow certain illegal immigrants to become legal US residents, Republicans are pushing back with details about the DREAM Act that have gone largely unnoticed, FOXNews.com reported Saturday.

The legislation would permit young people to become US residents after spending two years in college or the military. It would apply to immigrants who were under 16 when they arrived in the US, have been in the country at least five years and have a diploma from a US high school or the equivalent.

The alert says that not only would the legislation put an estimated 2.1 million illegal immigrants on a path to citizenship, it would also give them access to in-state tuition rates at public universities, federal student loans, and federal work-study programs.

Illegal immigrants who gain citizenship under this legislation will have the legal right to petition for the entry of their family members, including their adult brothers and sisters and the parents who illegally brought or sent them to the US.
Posted by Queens Crapper at 12:41 AM

Are these POLS out of their minds?

"Are these POLS out of their minds?"

No, they just want more people to vote Dem.

One way to lose the votes of citizens is to privilege illegal immigrants over the citizens of neighboring states.

All these politicians (criminals) care about is themselves. They will go to any lengths to break the law so that it enriches them. Why do you think the city and state governments have no money? It's because there are so many illegals (criminals) who are bleeding our hospitals, schools and services dry. In turn, taxpayers foot the bill and get fed up and leave. Time to enforce the laws on the books and deport all the illegals. Watch the coffers fill up with cash when they are gone. If they want to be here so bad, let them come here legally. As for Ackerman, he's too busy with his Asian massage parlor ads in the local papers. He's a pig and turns a blind eye when illegals vote in elections (another crime).

The Dream Act will be America's Nightmare. The government should be concerned about citizens and their rights, not about illegal aliens. Sometimes I think they have more rights than we do. This Act will be too costly and Americans are already having trouble paying their bills and taxes. Send them back to their countries and let their governments deal with them. It's not our problem.

you deleted my previous comment because it called certain people out as bigoted.

Actually, no I didn't. I deleted your comment because it linked to an irrelevant photo.

Ackerman is getting that same look Al Lewis (Grandpa Munster) had at the end.

In 1986 Senator Kennedy said, "This amnesty will give citizenship to only 1.1 to 1.3 million illegal aliens. We will secure the borders henceforth. We will never again bring forward another amnesty bill like this."

As long as the borders are open, we will continue to need amnesty legislation.

We need to enforce our laws and protect our borders. Our government has no idea who is entering our country. Terrorists come to our shores with plans to destroy us. We need to smarten up and take action. Allowing millions more to permeate our borders and cheapen our citizenship is not the answer. ALL ILLEGALS need to be given a time frame to go home willingly. If they don't go willingly, they need to be deported. Our government should streamline the Immigration Process so that people who want to come here LEGALLY can do so in a timely fashion.

They cant do this without closing and securing the borders with the army first. It would be suicide.
Every Mexican family has an anchor baby member in the states. I don't know whats worse this AMNESTY or 'Re-Unification"
These people will all become Democrat voters and welfare brats like most the PR's and DR's that came to NYC in the 60's.
I remember on Dekalb ave (Bushwick)they would throw their garbage out the window, fiesta and fight every night!

the illegal parents of these anchor babies created the jeopardy that has resulted. Americans can not assume the cost for educating these illegals babies.
send them back to the nations that they fled from.

ackerman and his liberal/progressive/democrats are sick,sick,sick,. yet you keep voting for your own destruction ??????

We are taking over, and we will bury you!!!

I could agree that the ones who volunteer for the military should have this.

For the others, I don't see going to college as a sacrifice, it is more a priveledge.

Not only school taxes

Read the "Re-unification" of this Bill
For every on of these kids the Dream Act apply there are perhaps 20 turd world relatives.
...and you know there is no way of verifying who and what they are

Hide that spare room or unused basement because Turtle face and Obama will be coming for it.
So you don't want sec 8's with criminal history's in your home ? Be prepaired to hand over a huge penalty tax.
Possibly a discrimination fine, arrest, forfeiture of property.
Good chance that is how the government (Bloomberg anyway)is gonna pay for part of this.
They do this shit Dutch and Swiss country's in Europe.

Watch them ram this through around Christmas time when most the opposition is busy
In other words BEND OVER !!

"Hide that spare room or unused basement because Turtle face and Obama will be coming for it.
So you don't want sec 8's with criminal history's in your home ? Be prepaired to hand over a huge penalty tax.
Possibly a discrimination fine, arrest, forfeiture of property."

This stuff is better than newspaper comics. Really dance of the insane.

You don't do your borough any credit.

"You don't do your borough any credit"

YEP got that right I give emm "OohGATTZ" !! United States Bootdello ! Oh how my grandfather R.I.P would go off (Spelling)

Dance to the insane ?
Yes, right again since the Ted Kennedy whores FOR this occupy its lowest level !!!
Speaking of ...Wasn't Ted the drunken bum that took that girl for the midnight joyride ?
-Joe

Mayor Bloomturd said I had the best mouth he ever came across!

"Speaking of ...Wasn't Ted the drunken bum that took that girl for the midnight joyride ?"

Speakin' of drunken bums, wasn't it "W" who started a useless war in Iraq based on lies and propaganda...4429 killed so-far and 32929 maimed and wounded to-date.

Kinda pales in comparison..doesn't it

The pointless Iraq was also ruined our effort in Afghanistan by diverting our resources and allowing a bunch of filthy arabs in caves to hobble a major power with improvised explosives.

America had the Afghans under control until Iraq

If your are going to shoot your mouth off at least know what you are talking about.

How can you work if your not allowed to work, how can you pay taxes if you dont work?

They steal identities and work.